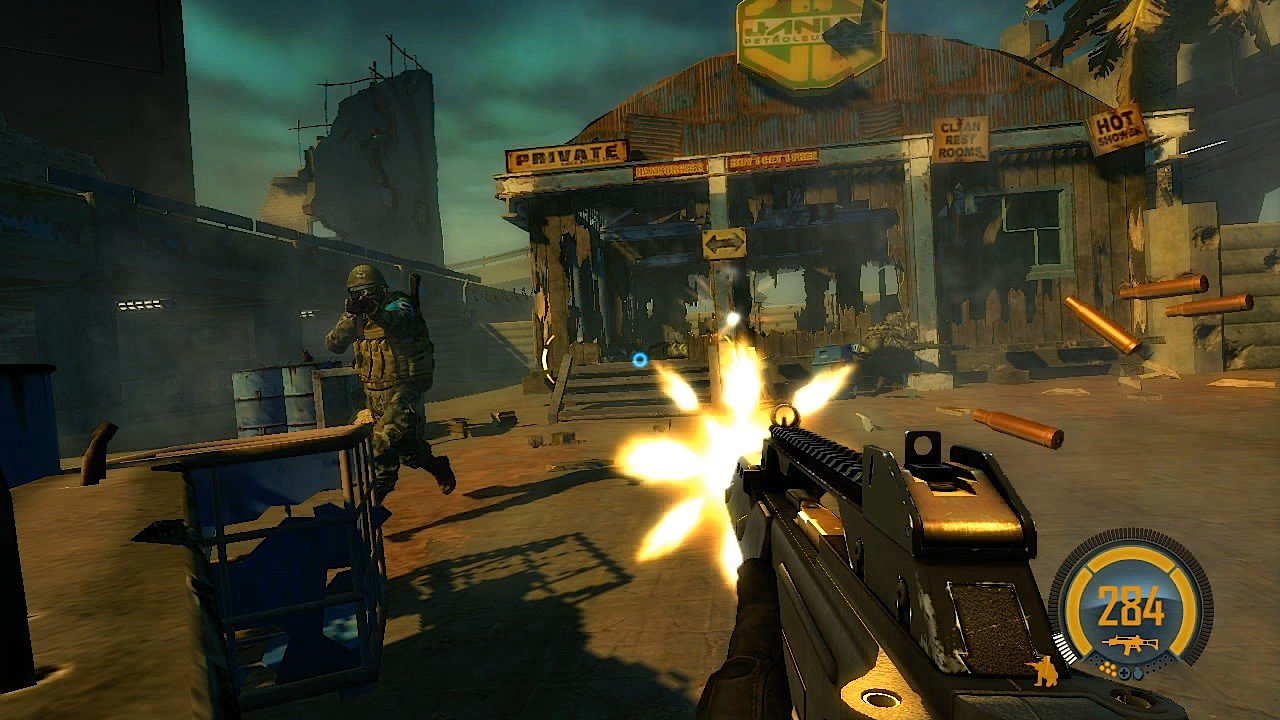 Bodycount is the latest first person shooter from Codemasters. It promises one explosion after another and crazy fire fights, all while “shredding” your way through war zone after war zone in the name of global prosperity. You play as an agent of the Network: a clandestine organization whose mission is peace, by any means necessary. I tell you, it sounds promising. Jump into a war zone, pump a few thousand bullets into the locals and then watch peace unfold, right? Bodycount should be filled with explosive action and white knuckle fire fights, but what you get is a generic shooter that suffers from some serious design flaws. While I should have been watching bullets fly and bodies pile up, I couldn’t get past the unintuitive levels, terrible sound, and frustrating controls.

Bodycount doesn’t waste much time throwing you into the action. Right off the bat I was treated to a very pretty looking cut scene as my operative was dropped straight into the conflict zone. Although it looked really polished, I found that I wasn’t given anything close to enough information to frame my character, task, or even gather some semblance of a point to my actions on the ground. Upon arrival I was greeted by a disembodied voice telling me how to go about completing objectives. Listening to her was strangely unsettling. I was never formally introduced to this voice. She just starts talking to me. No explanation about how she’s my operations counterpart or link back to HQ. Not even so much as a hello. This disembodied voice goes on to frame the action from time to time and tries to explain things to you but none of really makes any sense and she has more questions than answers. Me being a silent protagonist couldn’t really add anything to the conversation. It felt like she was holding my hand while being extremely obvious and annoying. It was like playing a constant escort mission without the actual escorting. I understand that this is supposed to be a story involving international conspiracies, clandestine organizations, and this mysterious Target Corporation, but is it really necessary to be that confusing? I was really lost and couldn’t follow the story at all. This may be due to the fact some of the context is provided in text form on the loading screens between missions but once the next stage is loaded it’s goodbye info, hello confusion. If you missed it, too bad. I never thought I would wish for longer load times. I think that Bodycount would have been much better had the player been presented  with more information right off the bat. Instead, I found myself not really understanding the context of what I was trying to accomplish as an operative of the Network.

The poor execution of the game’s story is forgivable, but what I really didn’t like about Bodycount is how it plays. I’ve played a lot of shooters in my day and I usually enjoy them, but Bodycount features an odd control setup and frustrating aiming mechanic. First off, I can’t stand it when a melee attack is performed with a face button, in this case the “circle” button. Again, this would be forgivable if the melee attacks actually worked. I found some collision detection problems with the melee attack which in my experience only worked about half the time. The weapons feel underpowered and the game has some of the worst sound design I have heard. Not a single weapon sounded like a “real” gun. At one point I was wielding what is supposed to be a high powered shotgun. Yet two point blank shots barely phased my foe.

As you progress you can unlock various abilities to help even the odds when fighting against waves of goons. The only one I found useful was the Adrenaline which makes you invulnerable for a short period. Using the Adrenaline was the only time I felt like a bad ass. The other abilities are far more lackluster. The airstrike is cool, but takes a long time to recharge. The incendiary bullets were useless, I didn’t notice a difference at all while using them. The power I found to be the most problematic was the Target Pulse Wave used to highlight your enemies. This is ordinarily a nice touch, but the enemies look too much like the environment to begin with. I don’t mean they hide or are camouflaged, but due to their colour pallet they tend to blend into the scenery, thus making them hard to spot. I didn’t like how an ability was used to compensate for ineffective character design. The cover and aiming system – which is my biggest problem with this game – is one of the most frustrating things I have ever encountered in a console shooter. Rather than simply ducking behind cover and watching as the enemies chip away at it, which was very cool by the way, you have to lean out to shoot. Behind cover it’s not so terrible, but the “Lean” button and “Iron Sights” button are the same, which means that every time you look down the sights of your gun, you can’t move. Apparently, if you only press the button halfway you can still look down your iron sights and maintain your mobility…at least that’s how it’s supposed to work. However, this button never once worked for me, and most of the time I would miss my shot because I brushed the left stick. Worse yet, the mechanic also leaves your character stuck in open terrain while you try to line up a shot. I understand that they were trying to be unique with this peak and shoot mechanic, but it felt awkward and really frustrated me. Bodycount has some awesome cover destruction but I was too distracted by this control setup to enjoy the “shredding”.

And finally, I found the mission design in Bodycount completely uninspired. Every mission I played ended up being the same, regardless of how it began. The structure is pretty much fight your way to the X, then press the action button or kill the target. Every once in a while I would get a mission that had me still fighting to point X, but once there I was supposed to capture, interrogate or pretty much do anything besides kill the guy. Excited for some variety, I would happily dispose of wave after wave of dumb goons until I reached my target. Unfortunately, as soon as the target came on screen I was given new orders to terminate them, thus making the mission the exact same as all the other ones. Why bait and switch players like that? I guess it’s easier than actually designing compelling missions. Overall, I do appreciate that Guildford Studio and Codemasters set out to make shooter that wasn’t a generic Call of Duty ripoff, but the problem is that as a designer you can’t ignore everything the genre has done successfully. Call of Duty and shooters of similar caliber have done so many things right that I can’t understand why all the innovations we’ve come to love about first person action games were ignored while making Bodycount. I do want to give special mention to the destructible environments. They were really well done. It was intense to hide behind a barricade and watch as it got all “ropey” before being completely obliterated. This is an awesome feature, but it’s too little to make up for the repetitive missions, awkward controls, confusing narrative and overall generic feel of the game.

Overall, I do appreciate that Guildford Studio and Codemasters set out to make shooter that wasn't a generic Call of Duty ripoff, but the problem is that as a designer you can't ignore everything the genre has done successfully. 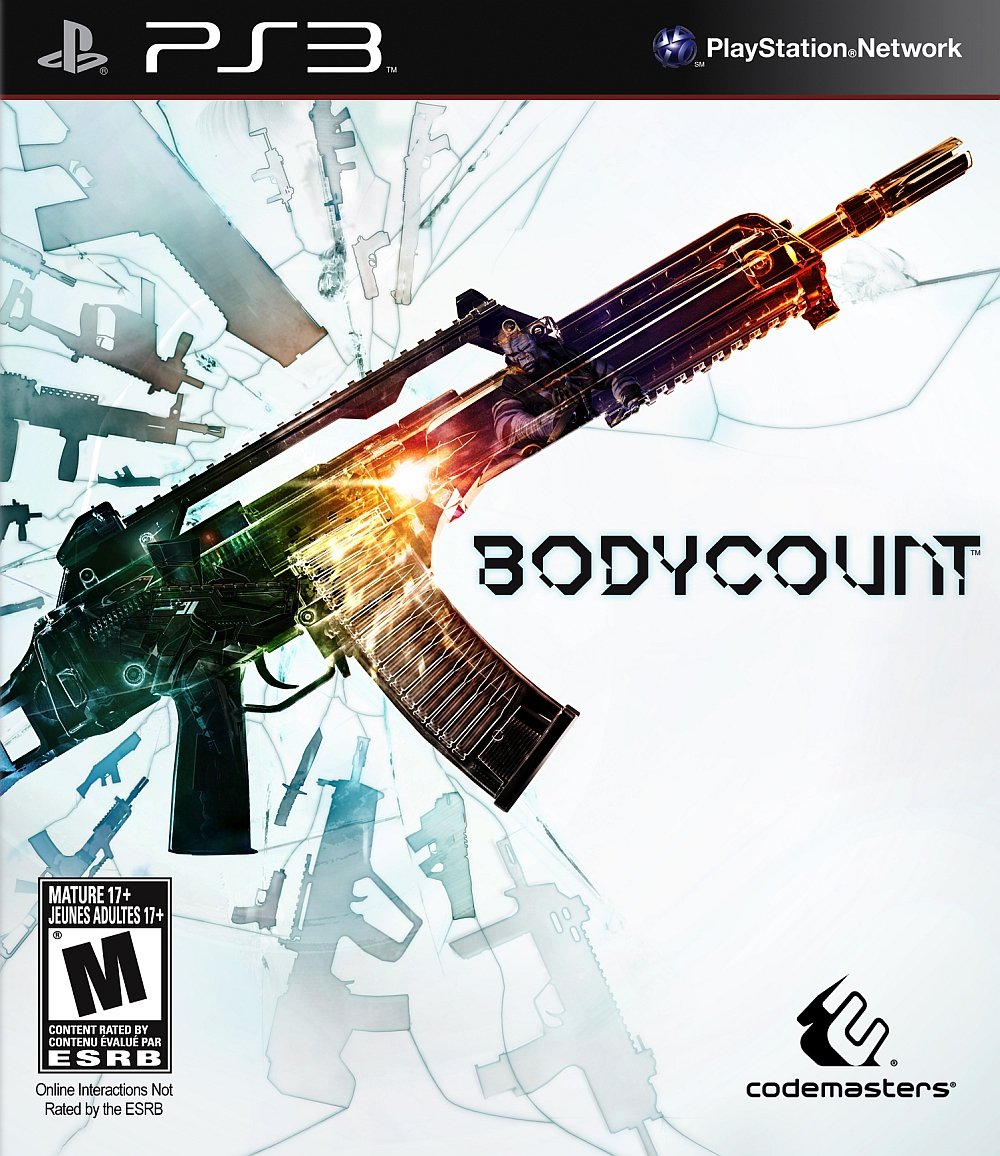