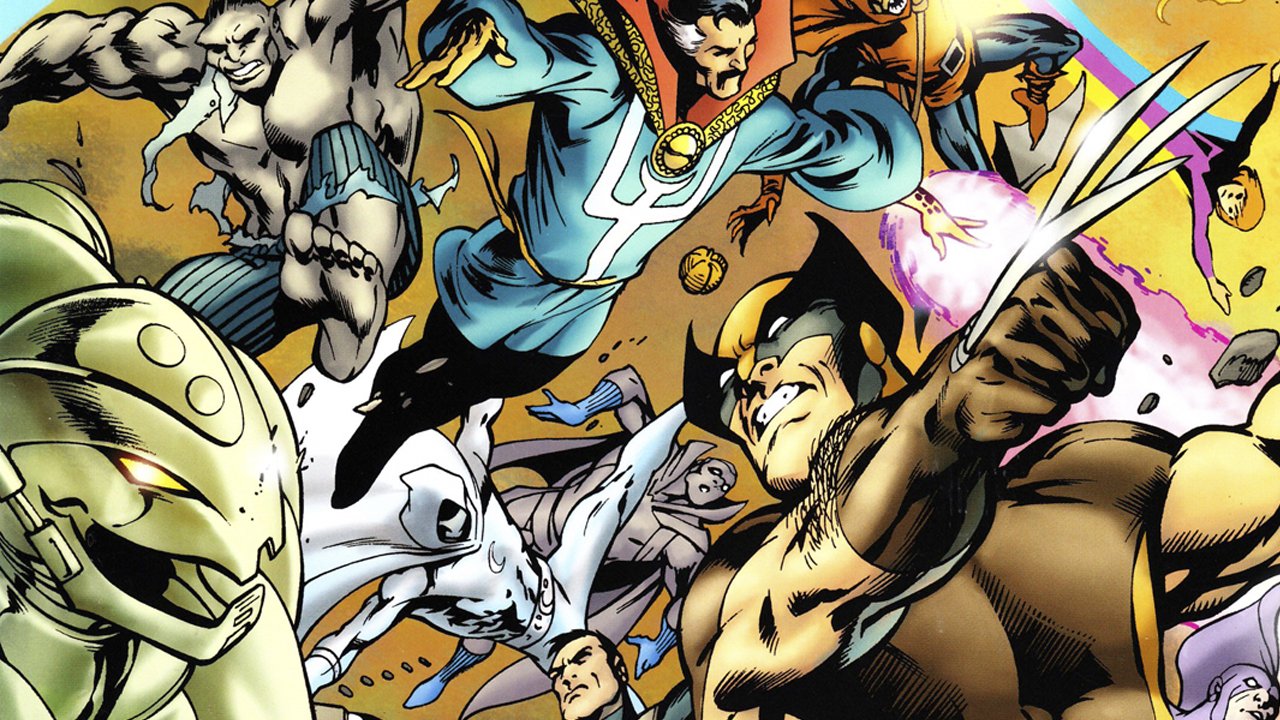 Last year, Marvel released Acts of Vengeance Omnibus, one which I was so excited about when it was first announced months earlier, and devoured upon release.  This year, the companion volume has been released, much like last year’s X-Men: Inferno Crossovers, collecting all the other crossover issues for Acts of Vengeance that weren’t included in the initial release. The initial release of Acts of Vengeance included only those titles that were a bit more central to the plot, mainly the Avengers-related books, which left a lot of odds and ends books uncollected- at least until now.

If you’re looking for an absolute smorgasbord of comic book goodness, you can’t go wrong with Acts of Vengeance Crossovers Omnibus.  The cover matches up with the cover of the Acts of Vengeance Omnibus to form one image as well.  The basic premise of Acts of Vengeance was that a few of the big-name heroes came together, thanks to the machinations of Loki, and decided that the best way to take down their foes was to switch things up, and set them against new adversaries who didn’t know their weaknesses, and had never fought them before.

The stories in this volume range from the excellent to the bizarre, and everything in between, as heroes take on villains that they’ve never fought before, with strange results.  I wasn’t reading comics when these issues were originally published, so for me it was an amazing opportunity to go back and see what the Marvel Universe was like back then.  I mean, I knew the basics of where the big characters were at this time period, but other characters, like Dr. Strange?  I had no idea.

Of the bigger name books that are featured here you get a few issues of Walt Simonson’s run on Fantastic Four, the infamous Daredevil vs. Ultron issues of Daredevil and the Mandarin/Ninja Psylocke issues of Uncanny X-Men. On the not as famous list, you have Dr. Strange tangling with Arkon, Enchantress and the Hobgoblin of all people, the Punisher taking on Dr. Doom (yep, that’s right, Dr. Doom!) and Bushwacker, Killer Shrike proving to be a problem for Moon Knight, Typhoid Mary taking on the kids of the Power Pack, Scorpion taking his schtick to Canada to menace Alpha Flight, the Vulture taking on Rusty and Skids, Apocalypse turning down Loki, Chameleon masterminding a revenge attack on Spider-Man using the foes he dispatched earlier in Acts of Vengeance with the Captain Universe power, and the second Damage Control mini-series.  So like I said, it’s a real mixed bag.

The reprints look fantastic, and the binding on the volume is quite good as well.  It’s a heavy tome, but the reading experience is definitely worthwhile.  The Jim Lee-penciled issues of Uncanny X-Men still look fantastic, but you also get two excellent issues of his Punisher War Journal, which at times is almost better than the work on Uncanny, as it is darker and his inker/colorist give the art a different look.

This is a very fun and entertaining volume, although it has little bearing on the main Acts of Vengeance storyline.  Instead, we just get story after story of heroes taking on villains they never had before, and in most cases never would again, in some kooky and offbeat tales.  The story involving the Mandarin and Psylocke became one of the character’s most defining moments, changing her forever, whereas other aspects, like Dr. Strange being more street-level and having problems with Hobgoblin II, Punisher caught between Dr. Doom and a Doombot, and Moon Knight having a sidekick join him on the battlefield, are aspects that were thankfully forgotten.

If you're looking for an absolute smorgasbord of comic book goodness, you can't go wrong with Acts of Vengeance Crossovers Omnibus.