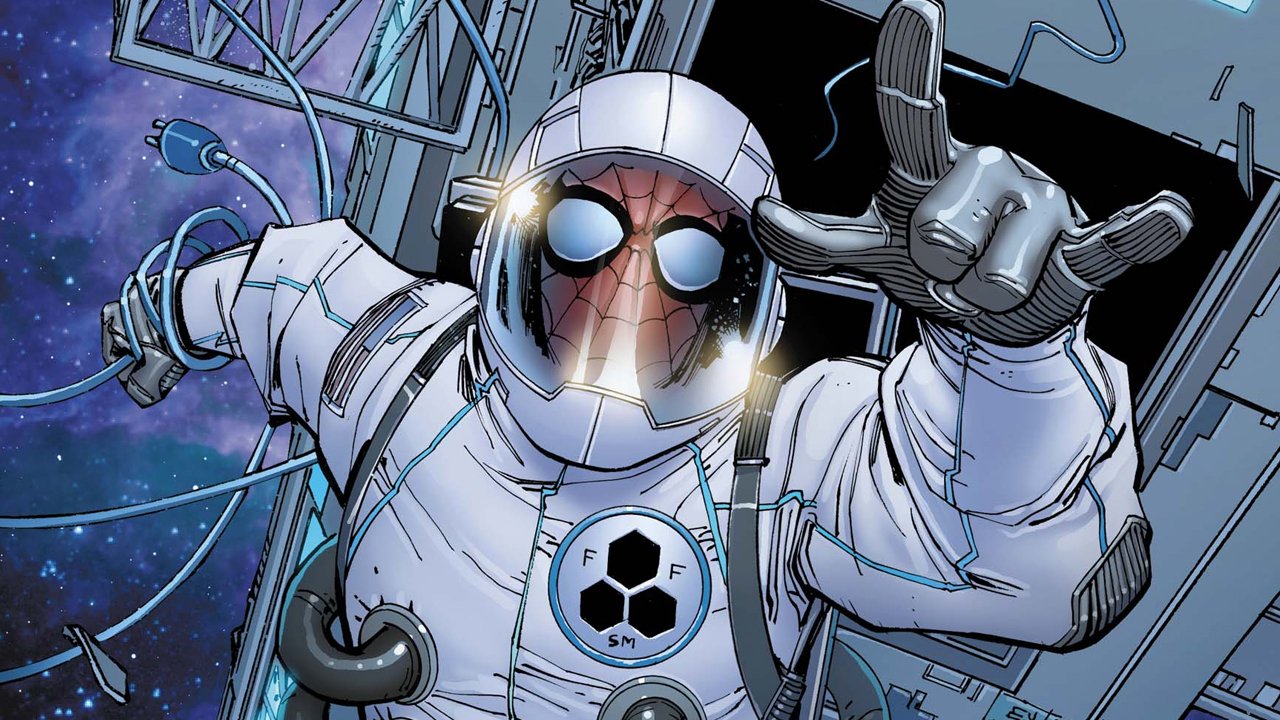 Amazing Spider-Man has been so exceptionally solid and consistent during Dan Slott’s tenure as sole writer that I’m starting to run out of ways to say that this book is an absolute gem each time I review it.  Last issue’s “Point One” issue wasn’t the strongest issue of Slott’s tenure, but this issue, co-written with Chris Yost (just like last issue) is a much stronger effort, as a sub-plot from far earlier in Slott’s run is revisited, and Spider-Man and the Human Torch go on a road rescue mission into space.  With “Ends of the Earth”, the next big Spider-Man crossover looming in the horizon, this issue feels like a great set-up to that arc, as we revisit Dr. Octopus, his octo-bots, not to mention John Jameson and his current mission in space.

This issue truly is a classic Amazing Spider-Man story because of how it deftly balances moments of suspense and action with solid characterization, some comedic elements, and character and plot progression.  John Jameson hasn’t been in this book since the storyline which saw Marla Jameson killed by a Spider-Slayer, as he’s been off-planet conducting experiments on a Horizon Labs project, so his appearance here is a nice touch, as is his attempt at bonding and connecting with his father, J. Jonah Jameson.  I really liked Jonah’s portrayal in this issue, as well as how Peter described Jameson’s personality, plus I’m extremely intrigued by the potential ramifications of Jameson’s displeasure with Horizon at being a seeming beacon for bad news and negative consequences, not just for his family but for his beloved city.

Not everything works in this issue, it’s not flawless, especially with Human Torch singing along to Rebecca Black’s “Friday”.  In all honesty problem with that  is more with how it dates the issue than Human Torch singing it in the first place.  Peter’s sudden disappearance from Horizon is really weak here, and I hope that Slott makes a point of revisiting it and having it mean serious consequences for Peter.  Not that I want anything to jeopardize Parker’s career there, but it just stood out to me as a big unresolved point, that he would just disappeare in the middle of a serious, potentially life-or-death situation.

Peter and Johnny’s rapport is quite well written, although a tad more exposition on just what happened to him while he was “dead” wouldn’t have been totally uncalled for.  His attitude aboard the space station was pitch-perfect, seamlessly oscillating between serious and blowhard braggart.  I’m a big fan of stories set either deep below the surface of the ocean or up in space, because there’s an added element of suspense in the story based on the characters’ surroundings.  Slott / Yost bring the cramped nature of the story out in the script.

The artwork this issue is handled by Camuncoli, with inks by the brilliant Klaus Janson.   Janson has a great inking style and he really brings Camuncoli’s artwork to life here, preserving Camuncoli’s stylistic touches while at the same time ensuring that this issue maintains the current visual aesthetic of this title.

This is a very solid issue, with great characterization and plot progression as we get closer to Ends of the Earth.  I love when Spider-Man and Human Torch team-up together, and this issue was no exception.  Highly Recommended!

This is a very solid issue, with great characterization and plot progression as we get closer to Ends of the Earth.