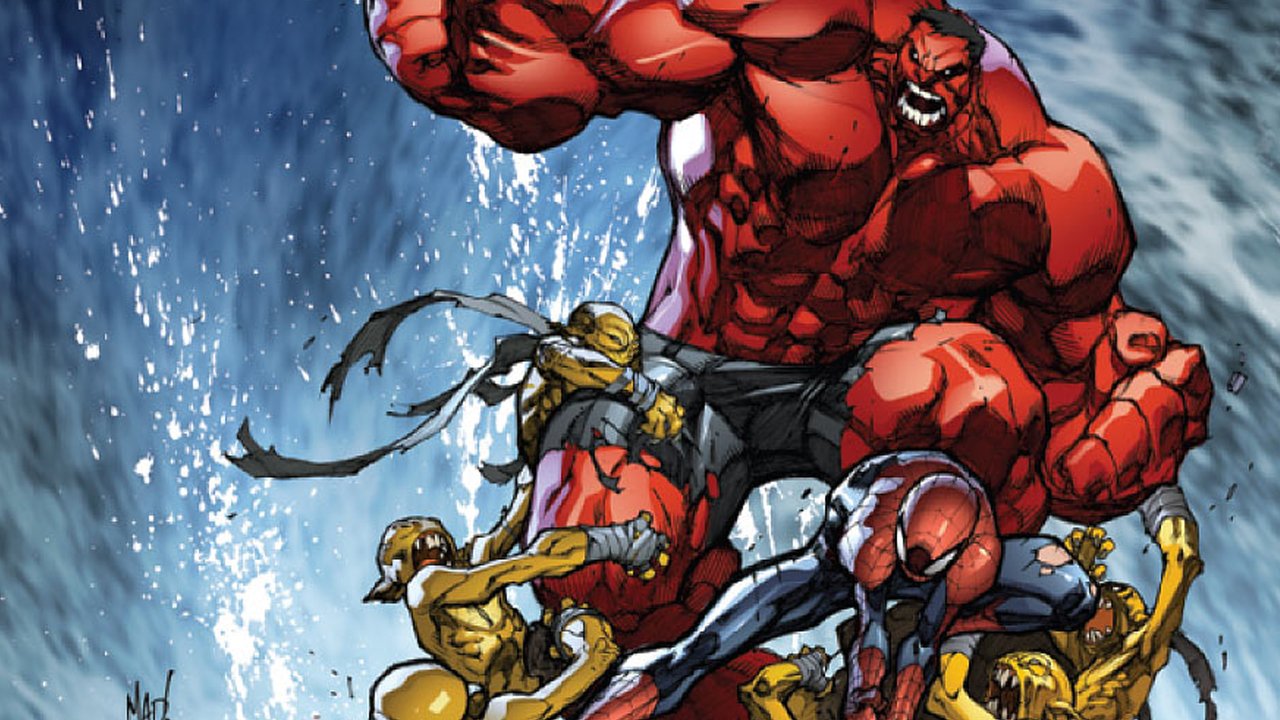 Avenging Spider-Man is a rip-roaring team-up comic in the tradition of Marvel Team-Up, focusing instead on Spider-Man’s adventures with the Avengers. Zeb Wells’ stock in trade is telling fast-paced, action-oriented stories with a great deal of wit and humour interspersed, which is what has made him such a great writer for Spider-Man. With this book, he’s given the space to tell fun stories in the overall continuity for Spider-Man but outside the central title, which gives him more freedom in terms of the stories he tells and what characters he uses. This first arc, although ostensibly about his team-up with Red Hulk, also features J. Jonah Jameson heavily as he stands up to his captors for better or for worse (this being a Spider-Man comic, of course it’s more for the worse). The story is a simple one, with Spider-Man and Red Hulk discovering that they’re trapped underground amidst a civil war, while Mayor J. Jonah Jameson finds himself kidnapped as a representative of the overworld, trying to get information from none other than Mole Man.

When it comes to the writing, it’s the portrayal of Spider-Man and his odd team-up with General Ross’ Red Hulk which electrifies the script. They’re quite an odd pairing, although to be honest Red Hulk himself is an odd enough pairing in and of itself, with the intellect and curmudgeony attitude of General Ross married together with the super-strong, monstrous exterior of the Red Hulk. Their banter, or rather Spider-Man’s attempts at bantering with Red Hulk, are a true highlight of the issue. But not to be outdone, J. Jonah Jameson is also quite well written here in this issue, as Wells gives us a strong-willed Jameson who borders on silly but thankfully skirts the edge, reminding me a lot of how Scott Lobdell wrote Jameson back in Uncanny X-Men #346.

Speaking of Uncanny X-Men #346, it’s probably no coincidence that the illustrator of that issue was Joe Madureira. Madureira delivers some beautiful artwork in this issue, which has a great deal of motion and action in it. The latter is exquisitely handled, but Madureira manages to make even the quiet scenes captivating, particularly those with Jameson. There’s just something about how he illustrates Jameson that I can’t get enough of; he imbues him with a great strength and dignity, despite what ludicrous things he might just be saying.

This is a fantastic new book, it’s fun, it’s action-packed, and features excellent work by both Wells & Madureira. Either one of these guys would be a reason to try out this book, but combined, they are one hell of a dynamic duo.

This is a fantastic new book, it’s fun, it’s action-packed, and features excellent work by both Wells & Madureira.