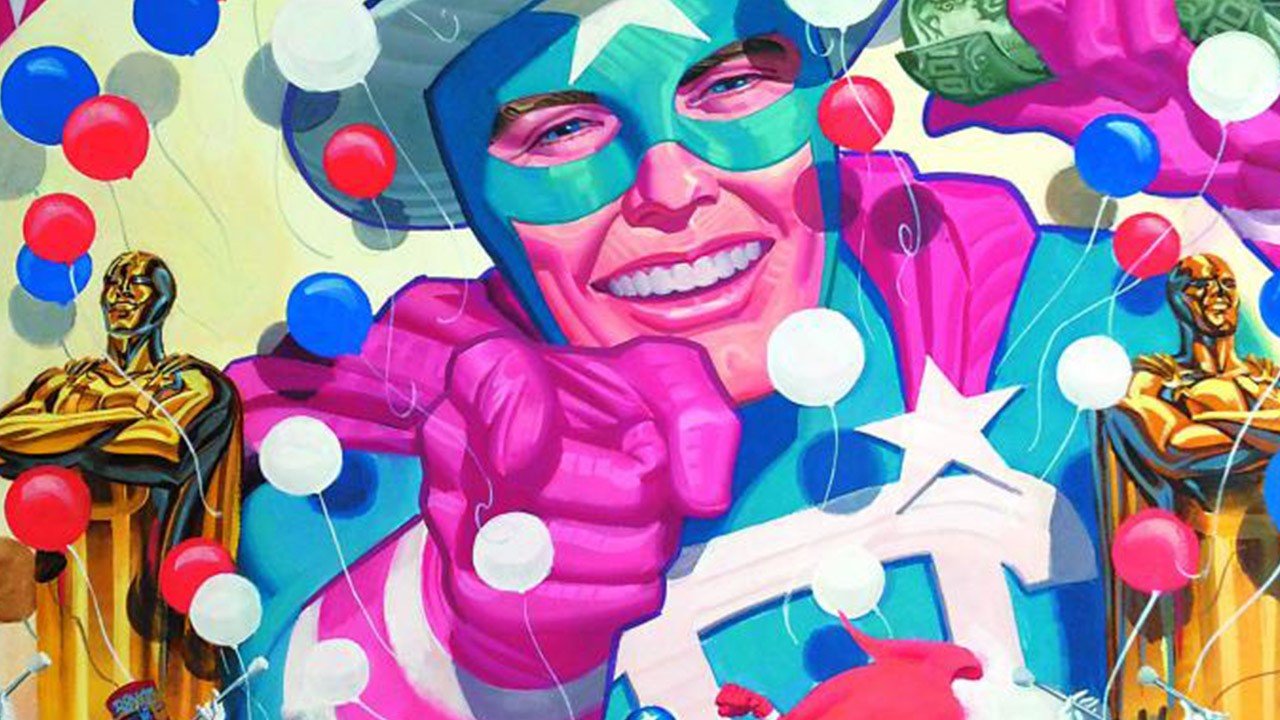 Steve Rude’s art in this Dollar Bill one shot is amazing. That won’t come as a surprise to anyone who’s familiar with his work, though his appearances in comics have become more and more infrequent. This is a gorgeous issue and his illustrative style suits the era of the story, the glamorous 30s and 40s. Rude’s line-work is evocative of actual comics from that time, simple but charismatically drawn characters and eye-catching colours by Glen Whitmore. Though each Before Watchmen title has an iconic look, Dollar Bill emulates the timeframe the story takes place in better than any of the others. Even if you don’t read a word in this book, it’s worth the purchase based on Steve Rude’s art.

Bill Brady, the man behind the Dollar Bill mask, had a familiar back-story for a handsome guy in the 30s/40s. Sports hero in school who got a scholarship and a shot at the big leagues until an injury killed his football career before it really started. With the help of his friends he managed to not flunk out of school but ended up with no real career options after graduation. Some failed attempts in show biz later, he responded to an ad that would change his life. He became the face of Dollar Bill, National Bank’s mascot capitalizing on the super hero trend. Never intending to really become a hero, Brady was honest from the start that the very idea terrified him.

When the Minutemen put out a call for new caped crusaders to join their team though, Dollar Bill answered the call at the behest of the men who paid him. It would be good for sales. Not really expecting to become part of the team, Brady was surprised to find out the Minutemen had room for someone that would bring them more publicity, even if he didn’t have the requisite ass kicking skills usually required. The Minutemen were heroes but also a brand, a very modern take on heroes in that era.

If you’ve read The Watchmen, you know how Dollar Bill’s story ends. If you haven’t, browse onto another part of this website before I spoil it for you.

I didn’t realize quite how young Brady was when he dies so embarrassingly after getting caught in a revolving door. Only 30 years old, he barely had a chance to do anything beyond be Dollar Bill in his life. Not that that’s a small achievement but you get the feeling that he wasn’t incredibly happy about it. It’s a sad tale of a man who starts off shilling for a bank but comes close to actually becoming a hero before his untimely death.

Overall Dollar Bill is a decent read with spectacular artwork but it doesn’t really add anything new to the Watchmen mythos. It’s ironic that it’s the book that appears to belong in the Minutemen era most but it isn’t essential reading. Still worth a look for the art alone though.

If you've read The Watchmen, you know how Dollar Bill's story ends. If you haven't, browse onto another part of this website before I spoil it for you.