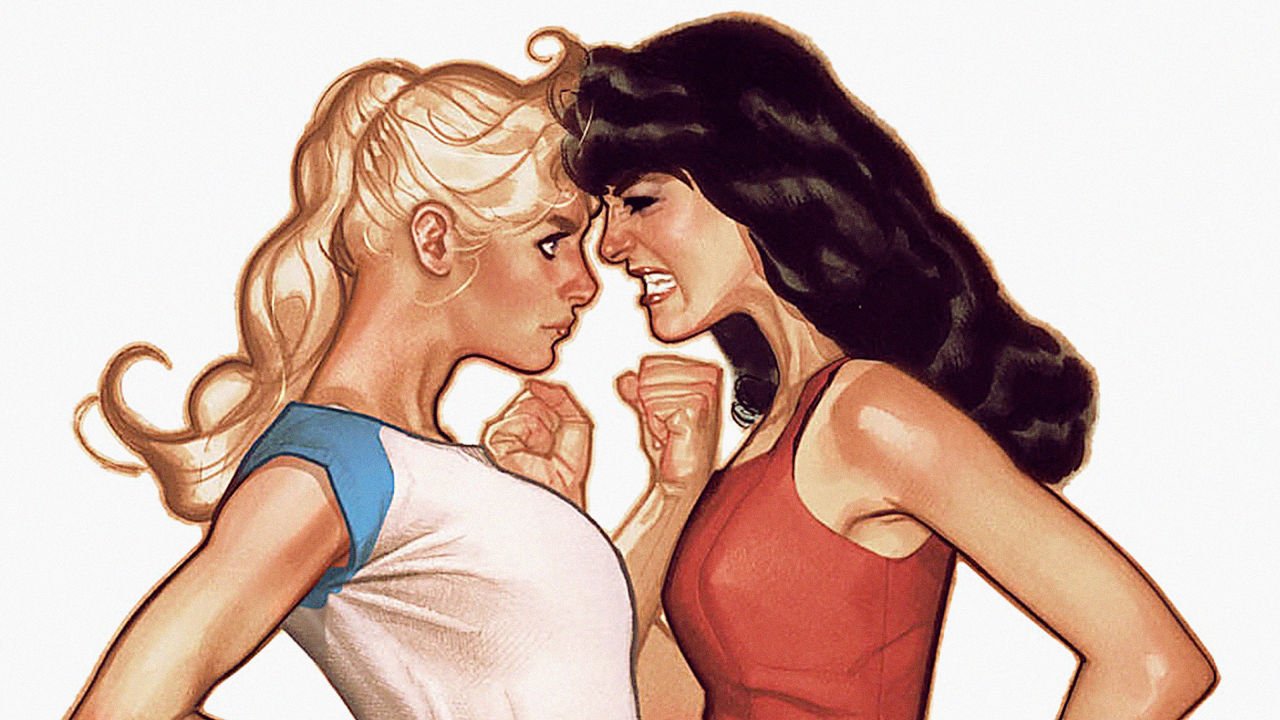 Archie Comics has been leaving DC and Marvel in the dust over the past year or two.

God, there’s a sentence I never thought I’d be typing. Yet it’s undeniable—the preferred comic publisher of grocery store checkout lanes has been gradually moving in a more interesting and experimental direction. Afterlife With Archie and Chilling Adventures of Sabrina are among the best horror comics out there, and the core Archie series manages to strike a perfect balance of genuine emotion and modern comedy. Their stable might not have a zillion different ongoing series, sure, but I am a firm believer in quality over quantity.

Add another one to the list, though, if the first issue of Betty and Veronica is anything to go by. Helmed by the renowned (and somewhat divisive) Adam Hughes, this new direction for the famous 2/3 of Archie’s love triangle is a refreshing take on the two characters. For the first time in ages, they finally have something to fight over that isn’t Archie’s bland self. Instead, they find themselves deadlocked in the middle of a debate on gentrification.

Yes, series mainstay Pop is getting pushed out of his famous diner by Starbucks stand-in, Kweekwegs. “They’re gonna take out the ice cream counter,” laments Pop, “and put in some kind of giant caffeine engine from Europe.” Riverdale as a whole is becoming more corporate, and the hometown feeling is getting pushed out in favor of mega-corporations. Small businesses are shutting down, and people that miss the way the town used to be are being left out to dry. When the diner gets threatened, the gang puts their foot down and begins canvassing the town to save their hangout.

However, Veronica—pampered and aloof as ever—remains mysteriously inert during this whole thing. No spoilers, but by the end of the comic, we find out why, and get to see a wedge get driven between her and longtime frenemy Betty.

“Gang teams up to save local business” is nothing new, of course. But the dynamic of having a main cast member who isn’t a cartoonish villain have some ambivalence towards the effort is sort of a hot take on it. And to use Betty and Veronica as two ends of the moral spectrum—characters who have historically functioned as not much more than Archie’s blonde or raven-haired choice of companion—is even better. It gives them something to care about and fight over that’s actually tangible, and not just some regressive “women fighting over men” plotline.

It helps that Hughes’ writing is top-notch here. The dialogue is snappy and witty, with just enough “modern teen” to make it relatable without feeling pandering. Furthermore, Betty and Veronica are made into fleshed-out characters within a short period of time, each with distinct personalities that don’t feel overbearing or trite. You can see why they’re friends, but definitely tell that in the wrong circumstances, they’d be at each other’s throats. Add in some breaking of the fourth wall and a narration by Jughead’s dog, and this is a comic with both humour and distinctive personality.

Everything’s wrapped together by Hughes’ signature vintage aesthetic. The way he renders these characters is a far cry from their old depictions, and yet, there’s a distinct nostalgia that oozes from his line work. Characters look like pop art takes on classic Americana art, giving the comic a crisp look that still feels distinctly old-school. It’s definitely different from the direction the new Archie series has gone, and honestly, it feels like an easier transition for people used to the older series.

Riverdale’s two most iconic female characters are finally fighting over something other than freckled white-bread, and it feels great. Betty and Veronica’s first issue is witty, poignant, and above all, liberating to two characters who have always deserved so much more. I’m eager to see Betty and Veronica’s inevitable cycle of fight and make-ups, and will definitely be following this series in the coming months.

Betty and Veronica’s first issue gives its protagonists stronger personalities and a more compelling rivalry than ever before, and is wrapped up with some fantastic art.