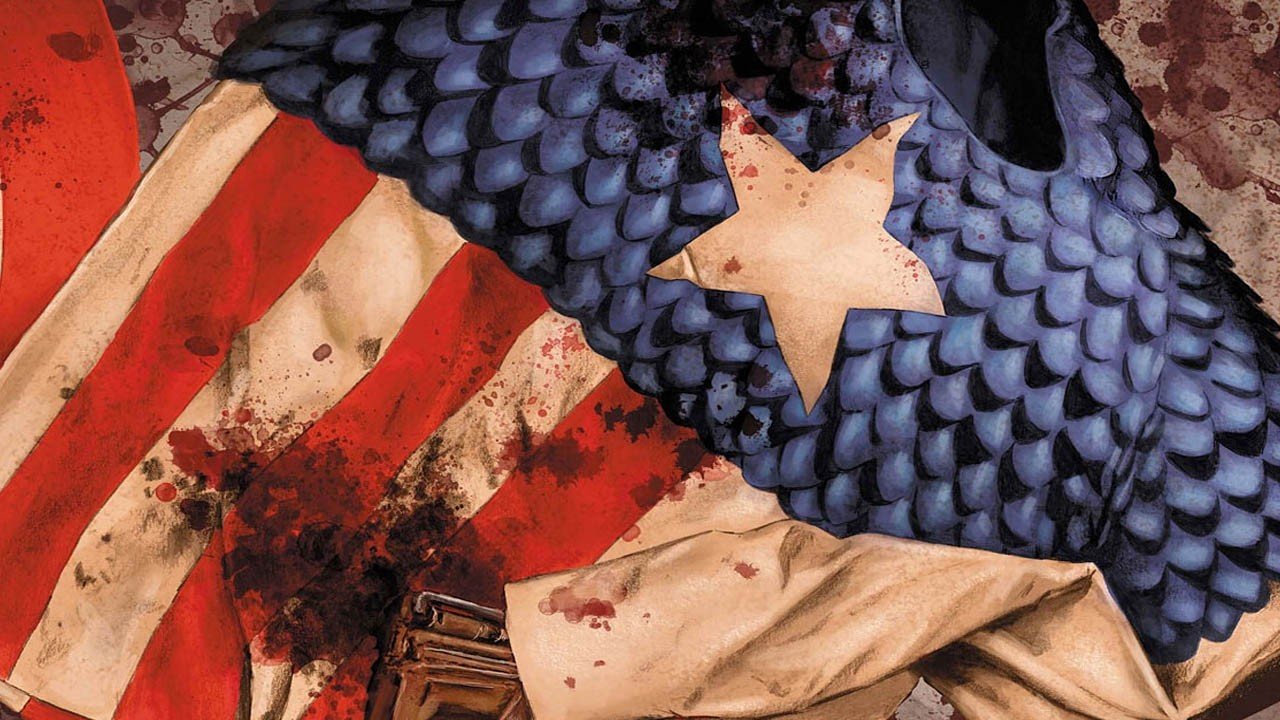 One of the most successful and notable Captain America takes in the character’s history is also one of the most recent, comprising Ed Brubaker’s landmark run on the character which started in 2004. His run started with the introduction of the Winter Soldier character, which revealed that Bucky Barnes had never died, but instead was still alive in the Marvel Universe. The impact of that revelation and the character’s reintroduction has been a constant element of the Marvel Universe since its inclusion, and the name of the second Captain America movie, coming in 2014, has the title “The Winter Soldier.” Brubaker is not a writer to rest on his laurels, however, and his stories that he wrote after that initial first year elevated the quality of the book to new heights. Over the past few years Marvel has started repackaging the run in larger “Ultimate Collections”, which combined the first two Winter Soldier collections into one, and also combined the two Red Menace collections into one. This new collection is a phenomenal deal, as it combines the contents of four prior trade paperbacks into one large collection. The collection covers Captain America #22-42, as well as the one-shotWinter Soldier: Winter Kills. Issues #22-24 and Winter Soldier: Winter Kills were previously collected in theCivil War: Captain America volume, and are shorter stories set amidst the Brubaker run, which then lead into the monumental and epic 18-part Death of Captain America storyline. This is a storyline that reads extremely well in the collected format, instead of being doled out over the course of eighteen months. Personally, I thought it was a true epic the first time around, and it only gets better upon rereading the story. The storyline was originally broken into three acts, and that’s how I’d recommend reading it, if you don’t have the time to read it all in one go.

Like much of Brubaker’s run on Captain America, each issue and storyline managed to successfully build upon prior issues and storylines, which at times can make the story a bit hard to follow if you weren’t there from the beginning, or haven’t read every issue of the run. Thankfully with the proliferation of trade paperbacks, it’s fairly easy to get caught up on the events of the run, so that all the subtleties can be caught and enjoyed. The story of The Death of Captain America is deceptively simple, as the Red Skull puts his master plan into motion, which involves having Captain America assassinated. This doesn’t sit well with Bucky Barnes, who takes it upon himself to avenge his friend, and bring his killer to justice, and uproot the Red Skull’s master plan. The road is not a simple one, however, and soon, Bucky finds himself picking up the legendary shield of Captain America, and donning his own version of the Captain America costume to uphold the legacy of Steve Rogers.

Brubaker’s entire run on Captain America was very much based in espionage and a certain real-world sensibility, and that’s exactly what you get here in this collection. Steve Epting and Mike Perkins handle the majority of the artwork in this massive collection, and it’s Epting’s work in particular which helps to define this storyline and the run in particular. The real-world sensibility is adhered to thanks to the storytelling prowess of Epting and Perkins, and it’s such a treat to look at.

This collection takes you back to 2006, as Marvel’s Civil War gave way to the death of a comic book icon, as Bucky Barnes took the slow, tentative steps towards taking on the mantle of his fallen comrade for himself. This is a tremendously enjoyable and engaging read, as Brubaker continues the tale of Bucky’s transformation from former Soviet-brainwashed assassin Winter Soldier into the newest incarnation of Captain America. Highly Recommended!