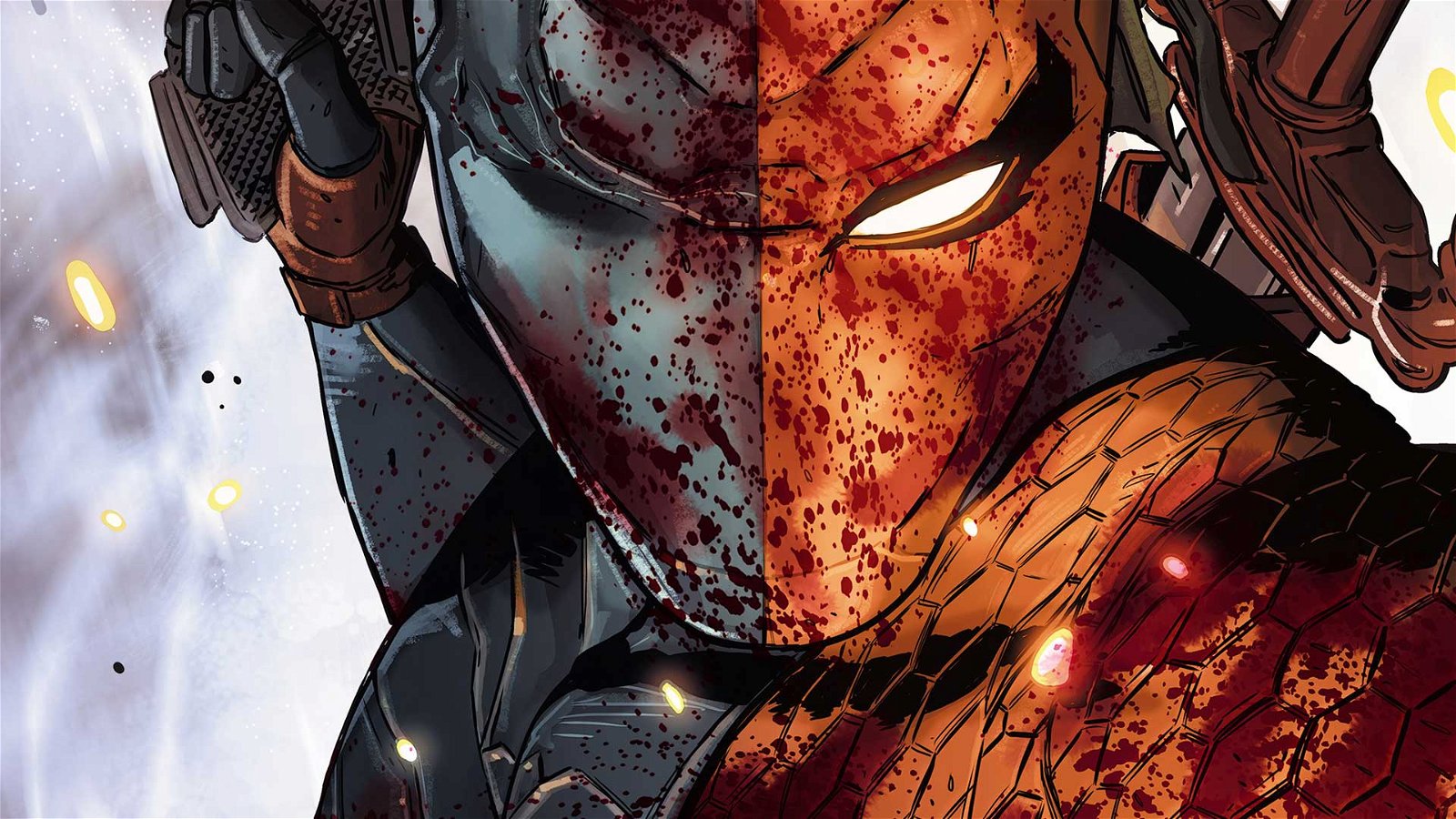 I don’t know much about Deathstroke.

My only connection to him has come from the TV show Arrow, where he delightfully tortured Oliver Queen during Season 2. But as much fun as it was watching him toy with poor Oliver, I wouldn’t consider Deathstroke to be a DC commodity worthy of his own comic series. Nor would I think he should be the main adversary for Ben Affleck’s standalone upcoming Batman film – which he likely will be.

But after reading Deathstroke Rebirth #1, I was clearly wrong in my assessment. There’s more to this assassin than meets the eye.

The comic begins, as many Rebirth issues do, with a flashback. Here we get to see what Slade Wilson was not only prior to losing his eye, but we also get a glimpse of him as a dad. And let me tell you, he wouldn’t be winning any Father of the Year awards. He’s an old school, belt-wielding patriarch. The flashback only lasts two pages, after which we’re transported to today. Wilson is in his Deathstroke garb, looking out at the remains of some third world atrocity. To Deathstroke, this is just another day at the office.

Reading Deathstroke Rebirth #1 gives this reader the feeling that all Rebirth #1’s should – you can’t wait to start the next issue. Granted, much of my enthusiasm has come from the fact that I don’t know much about him. He’s like a new toy I’ve been given as a kid – surprises around every corner. But still, this issue hits hard and fast and earns its Teen + rating.

Writer Christopher Priest takes readers on a journey into the darkness residing in Slade Wilson, both in the world he inhabits but also inside his heart and soul. Priest’s script is dark and delivers a delightful sort of edginess. He also adds a terrific action sequence at the end with no dialogue, showing this silent assassin in his element. Coupled with Carlo Pagulayan’s well-crafted illustrations, Deathstroke Rebirth #1 is something to behold from an aesthetic and narrative standpoint. Pagulayan offers a menacing Deathstroke, from close-ups on his mask to his machinegun-wielding splash page.

Most intriguing from Deathstroke Rebirth #1 is the real life flavour the comic offers. While Deathstroke lives in a comic book world of superheroes and supervillains performing extraordinary feats, Deathstroke ekes out a very real life in the underbelly of humanity. He’s in the trenches, aboard a beaten up gunboat making its way down a murky river in some far off country. He exists in a world where life is cheap and the events are grounded in realities that we’ve seen on the nightly news. As terrific as it is to read comics of the Justice League fighting off an extraterrestrial threat, it’s fantasy. It’s nothing we’ve seen in our world. While Deathstroke’s storyline might not be in our backyard, it is grounded.

And that’s a refreshing tone, at least for this reviewer. Deathstroke Rebirth #1 is definitely worth picking up and giving it a read. In fact, it was so intriguing, I’m remiss I haven’t started collecting the regular series.

I guess I’ll have to wait until the trade paperback is released.

Deathstroke Rebirth #1 is a surprise – a dark and edgy beginning to Slade Wilson’s life in DC’s Rebirth.