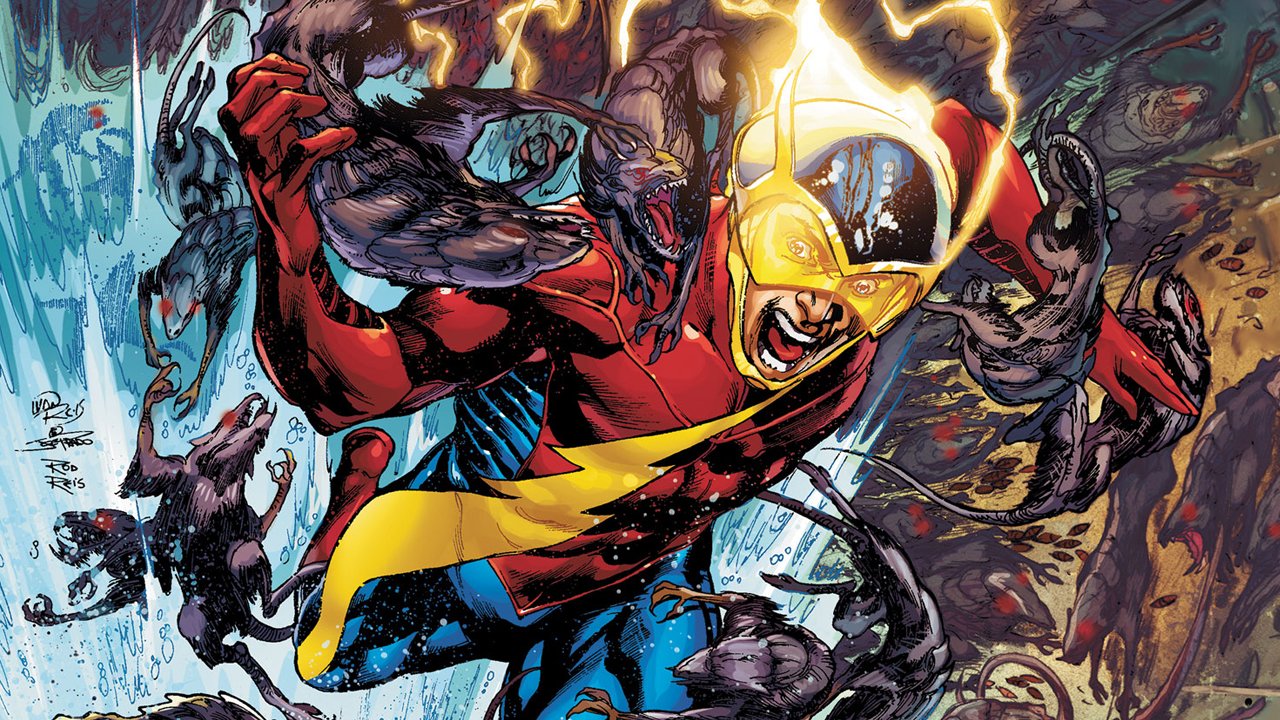 This new issue of Earth 2 has become quite notable as it features the revelation that Alan Scott, the future Green Lantern of Earth 2, is in fact gay in this new incarnation of the character.  While DC Comics has predictably used this opportunity to make this change in the character feel as gaudy as possible, part of a hideous marketing stunt, I found myself quite pleased with how James Robinson actually handled this new facet of the character.  To be honest, I couldn’t care less about the character’s sexual orientation, as long as it doesn’t become the sole driving characteristic behind the character.  Back when Batwoman was first introduced, DC Comics really disgusted me by constantly touting Batwoman not because she was a formidable new female hero, but because she was a lesbian . Robinson makes the fact that Alan Scott is gay pretty much a non-issue, as it isn’t done in such a way where when the reader finally finds out, it’s a huge shock, instead it’s as simple as Alan Scott meeting his boyfriend when he arrives at an airport.  Robinson is a writer who specializes in building strong characters, and given that this is a whole new Earth for him to play with, I couldn’t wait to see how he’d handle these new characters.  If I have a complaint about this issue, it’s that it’s decidedly slower than the first issue, and opens with a scene that will be quite confusing to most new readers.

Last issue closed with Jay Garrick finding a fallen Mercury, from the Roman pantheon, but this issue instead opens with the arrival of Michael Holt, also known as Mr. Terrific from Earth One.  I found this puzzling, not because of the character’s inclusion, which makes sense given his association with the Justice Society of America pre-New 52, but because his arrival wasn’t given much space in the comic, to explain just who he is, how he’s arrived, and where he’s come from.  I know of course that Mr. Terrific had an ongoing series that was part of the New 52, but which was recently cancelled.  Seeing as the book was cancelled due to low sales, I don’t understand the decision to include him here, and yet not really explain his appearance, given that most of the people reading this book have likely not read Mr. Terrific, hence the fact that it was cancelled in the first place.  Terry Sloane shows up during the sequence with Mr. Terrific, but I wish that Robinson had written this exchange a different way, as I felt it to be somewhat impenetrable to new readers, who aren’t aware of Terry Sloane’s history as Mr. Terrific in the Golden Age, pre-New 52.  His appearaence here only works when it successfully plays upon the fact that readers who he’s Earth 2’s version of Mr. Terrific, and yet it isn’t mentioned or discussed.

The rest of the issue is split between Alan Scott, as he arrives in Hong Kong, and Jay Garrick as he deals with the fallen Mercury.  Alan Scott’s segment of the issue was quite enjoyable, although somewhat slow, as the story plods forwards to his eventual transformation into Green Lantern, which doesn’t actually occur in this issue.  I have to admit to being surprised by the ending of this issue, as Robinson did a fantastic job in writing Alan and his boyfriend’s interactions, to the point where he already made me care about both characters and their relationship together.  Jay Garrick’s sequence with Mercury is enjoyable, yet I did feel that it went on a  bit long, with a lot of dialogue between the two which felt a tad unnecessary or even repetitive at times.

The artwork by Nicola Scott proves to once again be a major highlight for this series, as her artwork imbues the series with life and excitement.  Although I’m still not a huge fan of Flash’s costume design, particularly how the helmet is even farther away from Mercury’s helmet, which proved the inspiration for his old helmet, it is starting to grow on me a  bit.  Although I’m still not a huge fan of Mr. Terrific’s costume design for the New 52, Scott at least makes it far more enjoyable than I remember it being on the covers for the short-lived Mr. Terrific ongoing series.

This issue didn’t quite manage to live up to the high expectations set by the first issue, but it’s still fairly entertaining.  I’m looking forward to the next issue, as I hope the story moves more smoothly and at a quicker pace than it did here.

Earth 2 #2 didn’t quite manage to live up to the high expectations set by the first issue, but it’s still fairly entertaining.