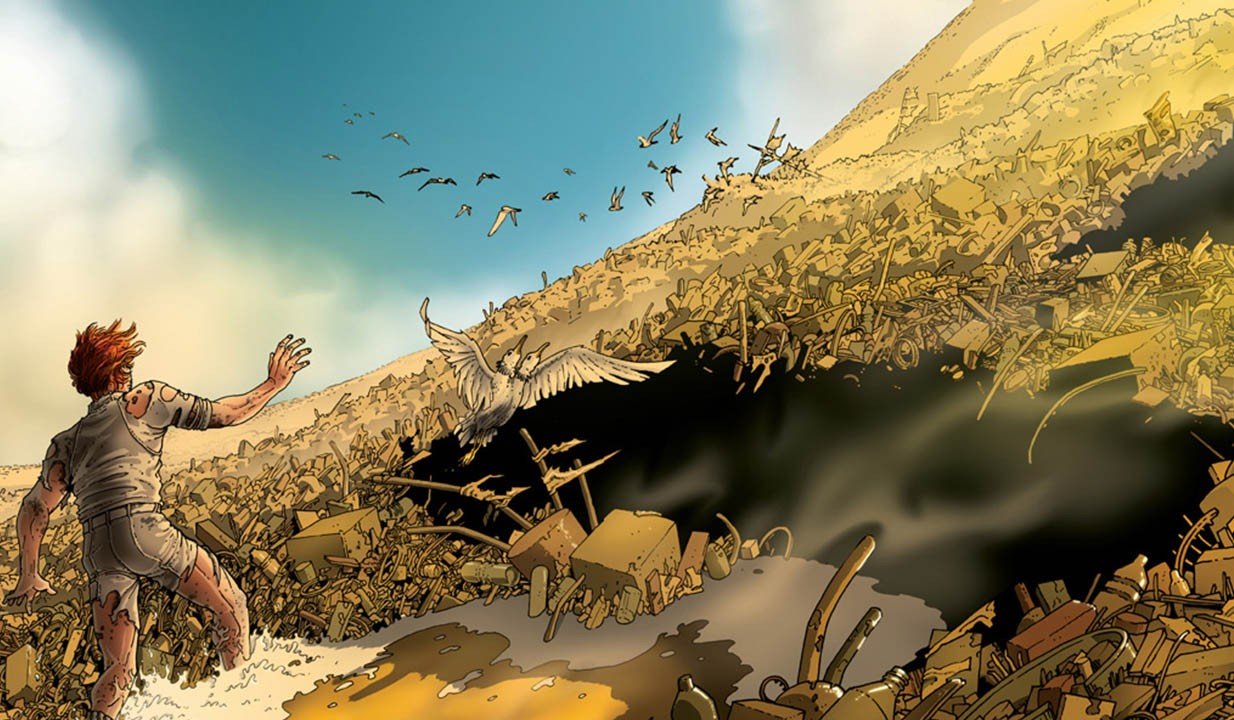 The title Great Pacific refers to what is commonly known as the Great Pacific Garbage Patch, a monumental collection of trash and debris, mostly plastics, that has collected in the middle of the pacific ocean due to ocean currents, specifically the north pacific gyre. The garbage patch becomes the focus of this continuing series about the heir to an oil business that decides to give up his life of wealth and affluence in order to make a difference in the world. The book comes off as a misguided attempt to increase awareness or create activism of some kind but fails in its attempts, the characters and the story are stale and the amount of misinformation overwhelms any positivity that could be claimed.

Harris’ writing in Great Pacific is subpar at best. The main story, featuring a billionaire playboy that decides to give it all up to make a difference despite the difficult relationship he had with his father, is stale and clichéd. The characters don’t particularly seem to have any depth and they all fit into easy-recognizable types; the aforementioned billionaire playboy, his loyal childhood friend, the evil board of directors, and the likeable, black sheep uncle that served as a mentor and father figure. Whether it is the result of the poor characterization or poor writing the dialogue feels unnatural and forced; there is nothing to set the book apart from similar stories and it seems to be following a familiar script.

Probably the most interesting thing about the book is the Great Pacific Garbage Patch itself, a real-life ecological disaster that has serious consequences. While it is nice to see focus given to a much overlooked issue the book addresses it ham-handedly and in many way shoots the message it presents; that is to say, Great Pacific damages its own message through poor presentation. The patch, first seen in the comic through satellite imaging, is presented as a massive island of garbage which stretches as far as the eye can see and forms a palpable landscape of hills and mountains; this contrasts with reality in that the patch cannot be seen by a satellite because it exists as an amalgam materials that are largely suspended within the water, not above it. Harris and Morazzo also include a two-headed pigeon to emphasize the negative impact of a floating mass of garbage, an image ripped from nuclear power paranoia and seriously misapplied. The book is also placed on unsteady ground by the inclusion of a short and unnecessary section in which Worthington’s narration describes the Maasai, a tribe that takes the form of “noble savage” in the narrative. This comparison not only inadvertently promotes behaviour that the book seeks to denounce but is mildly insulting in its fairly colonialist attitude.

Morazzo’s art is detailed and his colors evoke the image on the page but at no point do they really fit with the comic book. The expressions never quite match the narrative content and the body positioning and poses are awkward. The images are also remarkably flat, any texture attempted seems out of place and odd, spilled liquor appearing more like thick, congealed slime for example.

Great Pacific had an interesting concept and probably could have been worked into something interesting but as it stands it doesn’t really accomplish anything and is awkward to read. Unless the poor portrayal of an environmental disaster really interests you, I’d look elsewhere.

Great Pacific had an interesting concept and probably could have been worked into something interesting but as it stands it doesn’t really accomplish anything and is awkward to read.