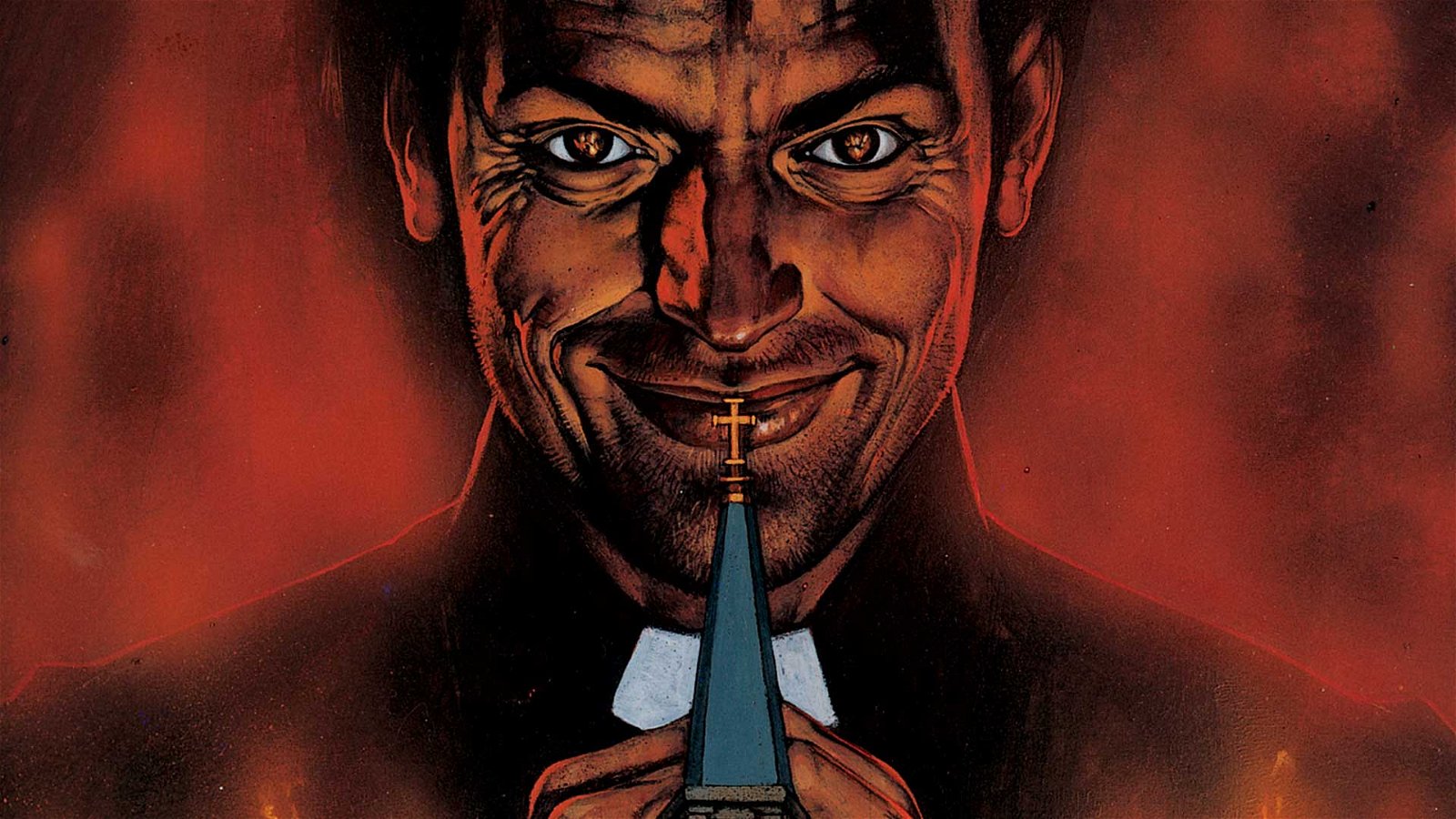 Preacher is one of those comics that I’ve seen and heard of hundreds of times, but never actually read. With the upcoming release of AMC’s live-action adaptation, I wanted to find out exactly how powerful the source material created by Garth Ennis and Steve Dillon really was, and if a comic book from the late 90’s could stand the test of time as one of the best to date.

Preacher follows the story of Jesse Custer, a Reverend to the people of Annville, Texas, who suddenly becomes possessed by the powerful entity, Genesis, resulting in his church and it’s members being blown up. Jesse runs away as the sole survivor of the event and begins to hallucinate, piecing together exactly what the spirit that entered him is. He eventually meets up with his ex-girlfriend, Tulip O’Hare, and the nomad vampire, Cassidy. With the agents of Heaven afraid of the power Jesse now has in his possession, they unleash The Saint of Killers to kill him and collect his soul. It’s during these encounters with The Saint that Jesse learns of his power, the voice, which is equivalent in power to God and can compel anyone to do what Jesse says. After learning that God has gone missing from Heaven and feeling as if he abandoned everyone on Earth, Jesse sets out on his journey to find the Lord and give him a piece of his mind.

It’s a lot of material to take in for a beginning to a very long story, but Preacher Book One manages to keep you hooked from start to end because it is one of the most unique comics you’ll ever read. Preacher breaks down barriers with its traumatic content and powerful themes. It’s the first comic I’ve ever read that feels like it’s only meant for adults to read, something that today’s comic industry could never afford to try again.

The highlight pieces to Preacher are its characters. While I was frustrated with Jesse in the beginning because he felt so introverted and lacked any of the rich development I was enjoying with Cassidy and Tulip, the second half of Book One answers every question I ever had about his character and opens him up to be an incredibly compelling protagonist. Jesse has been through so much in his life that Batman would easily concede defeat to Jesse’s origin story; it’s just that dark and hopeless.

Cassidy is the driving force that keeps you hooked in the first part of the story. Even though he comes off as a vile and selfish vampire, Cassidy has an addictive personality and I naturally grew to like him because he was the most extroverted of the three main characters. He has seen and been a part of hundreds of events throughout history during the course of his immortal existence, but now he feels extremely bored of everyday mundane life. When he meets Jesse and discovers his power, Cassidy decides to join the reverend’s quest because he knows something thrilling and exciting is just on the horizon for him to experience and that’s the feeling that he lives for. The two men begin to develop a strong friendship during the course of the adventure, but I can’t help but feel their fun times aren’t meant to last and I look forward to reading how their bond will be tested in later volumes.

Tulip doesn’t have as strong of a backstory as either Jesse or Cassidy, but she’s still a character that I greatly enjoyed. Tulip gets into deep trouble after Jesse suddenly disappeared from her life. She was left with nowhere to go and decides to become a hitman for hire to make ends meet. Despite having incredible marksmanship skills, she immediately screws up her first hit by killing the wrong person and takes off from town with help from Cassidy. Most of Tulip’s past is still unknown at this point in the story because it’s so focused on her relationship with Jesse. While the story begins by pitting the ex-lovers against each other due to their mysterious break up, they begin to rekindle their lost spark towards the end of Book One and you feel greatly invested in their relationship.

Preacher isn’t a comic for the light hearted, the easily squeamish or the religious. The content in this graphic novel is incredibly dark and it will continue to surprise you every moment of the read. There’s no light at the end of the tunnel or a happily ever after in sight. This is a comic that is all about displaying the most depressing, sadistic and vile parts of humanity. Preacher is the only comic of it’s kind that I’ve ever read and while I understand that some people won’t enjoy it and settle for AMC’s toned down version, I’m addicted and need to read this series to the very end.

If you can handle incredibly dark content, then you’re in for one hell of a good read.