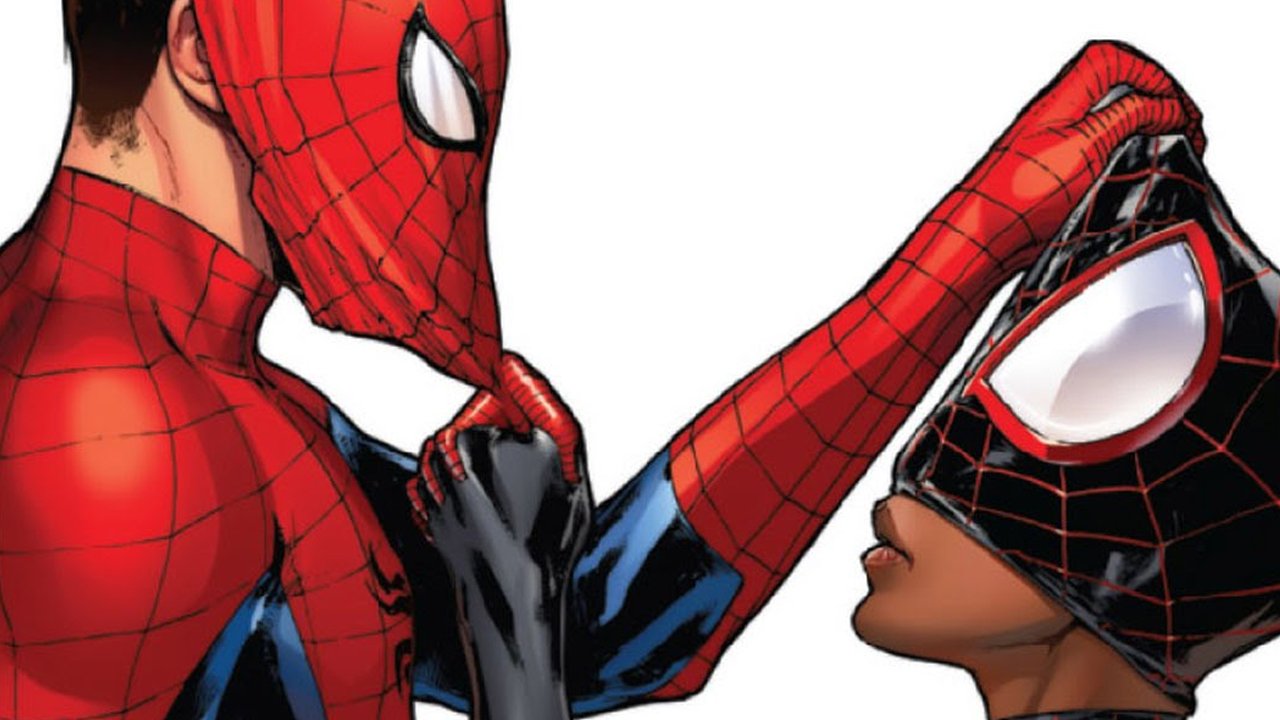 Spider-Men brings together Peter Parker and Miles Morales for the first time, but this story feels much more important in the grand scheme of things for Miles, compared to Peter Parker.  This is likely because Bendis writes Miles Morales’ adventures and not Peter Parkers, and thus far this storyline is taking place in the Ultimate Universe, with Peter interacting with Ultimate characters, such as Nick Fury.  Having recently read the Death of Spider-Man arc, as well as the Ultimate Spider-Man series frontlined by Miles Morales, it gave me a perspective on this book that many readers that might pick up this series might not have coming in.  From the perspective of a fan of the mainstream Spider-Man, this might not be the most accessible story going in, because it`s thus far deeply connected to the Ultimate Marvel Universe, and having at least a passing knowledge of recent events is important to understanding the status quo and not feeling left behind (as Spider-Man feels in this issue).  Thankfully, Bendis is able to use Peter Parker as a proxy for readers unaware of this continuity, which helps somewhat when reading through the book.

Considering Bendis` reputation for being a  fairly wordy writer, this issue showed considerable restraint on his part (well, except for one particular panel), as he dialled back the dialogue and instead let his artist, Sara Pichelli, dazzle readers with her breathtaking visuals.  I’m a relative latecomer to the ranks of Sara Pichelli’s fans, and hopefully after this high-profile book she’ll get a lot of new fans who can’t wait to see what she does next.  Her artwork is absolutely gorgeous, but more than that she excels in actually telling a story, and her fluid artwork makes the obligatory fight sequence between Miles and Peter fun and engaging, as the two have a great throwdown . There’s a good amount of humour in their skirmish, and Pichelli is able to show the humour in the script through her pencils . She has a light tone, which keepst he action moving seamlessly, but at the same time isn’t too light, as the issue remains grounded.

In terms of actual plot progression this issue is relatively light on that front, although we do get to see more of the villain of the piece, Mysterio, as he realizes what happened during the last issue, and Peter and Miles have a classic misunderstanding, leading to a fight which manages to showcase just what makes Peter and Miles similar and also drastically different from one another.  Miles takes Peter to the only person on Earth he could trust to know what to do with him, and afterwards Miles prepares to show Peter Parker the world, and bring him up to date on just who Peter Parker was in this universe, and what ultimately happened to him.  Just because the plot might not move ahead at breakneck speed, it isn’t a bad thing, in fact I thought the pacing on this issue was spot-on.

There’s tremendous potential in this mini-series, and with this issue we finally get to see a bit of that potential unwrapped as Peter and Miles officially meet.  The coming issues promise to be quite exciting, not just on a visceral level, with a throwdown coming between both Spider-Men and Mysterio, but also on an emotional one, as Peter will (hopefully) come face to face with the Ultimate Universe versions of Gwen Stacy and Aunt May.  Bendis has a terrific collaborator in Sara Pichelli, and I can’t wait to see how these two deliver with the next issue.  Recommended!

There’s tremendous potential in this mini-series, and with this issue we finally get to see a bit of that potential unwrapped as Peter and Miles officially meet.