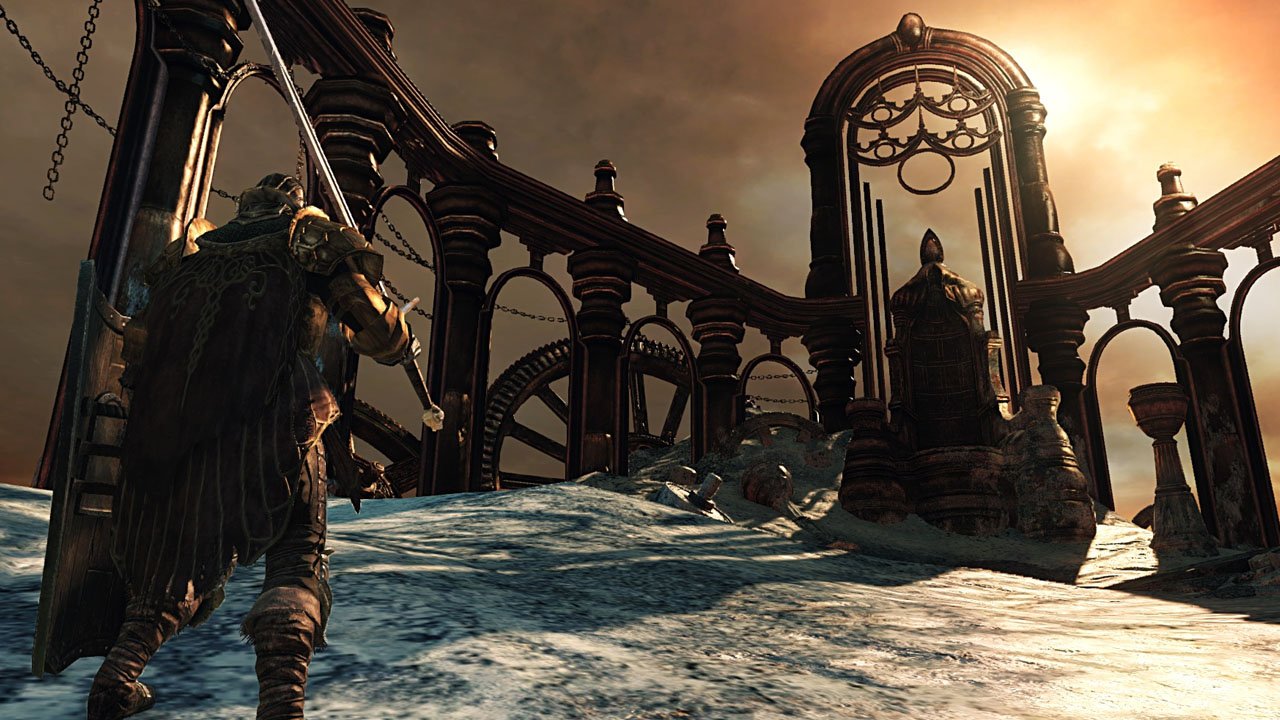 I’m one of the people who doesn’t have a problem with the ‘dudes with swords’ boss design of Dark Souls 2. I’ve heard the complaints, and there’s some validity: quite a few of the bosses you fight across Drangleic are human, often far larger than you, wielding some big weapon. For me, it’s thematic. You’re in the remains of old kingdoms, fighting the literally larger-than-life legends (sorry for the alliteration, could not resist). The Crown of the Old Iron King, the second of three DLC packs for Dark Souls 2, unfortunately takes the trend a bit too far, and it hurts it.

Now, credit where credit is due. Brume Tower looks great – ashes cover everything, piled over the iron structure that of course has trappings of the vanilla game’s Iron Keep. It manages to be distinct; it also keeps with Shulva’s design of being able to see areas that you will eventually travel to (in the form of other crumbling towers connected by chains, or remote rooms viewed through bars). There’s a grandiose sense of scale and a definite sense of mad industry, with well-structured shortcut mechanics – there’s also some rather clever optional areas (which I of course handled with magic rather than melee, because screw build pretension, I like magic). There are a lot of ambushes, some rather overwhelming in their scope. The optional section has a particularly interesting ‘hard path’ that requires expert timing, but rewards you with the ability to access some platforms you can’t reach that have pesky ranged enemies.

Unfortunately, the boss fight at the end of this section is just a repeat of an earlier boss, with only a slight alteration to colour and a minor upgrade to one phase. It’s disappointing, and rewards you with the same boss soul as before (not particularly useful, since it only has one item it can make). I suppose the optional area in the previous DLC didn’t offer much beyond upgrade items either, but it’s still somewhat of a letdown. I will say that it does make sense from a lore perspective.

[pullquote align=”right” class=”blue”]“There’s a grandiose sense of scale and a definite sense of mad industry, with well-structured shortcut mechanics – there’s also some rather clever optional areas.”[/pullquote]

The other two bosses are the same, and it lays it on a little thick. Make no mistake, the story reasons for the bosses are solid and actually quite welcome; the fights themselves, however, lack some of the variety of the previous boss. The one non-optional fight is a cool design and a decent fight, though made trivial by modifying the boss arena prior – ironically, missing one of the secrets along the way is the only method to completely neutralize the hazards. I rather enjoyed this fight in spite of this, and its ability to counter circle-strafing is quite a welcome response to one of the major Souls exploits, one I have used myself.

The most disappointing area is tied to another optional boss, accessible only after you gain the titular Crown using the ‘enter memory’ mechanic. It lacks any of the distinct qualities of the Iron Keep or the Brume Tower, consisting of a series of windowless iron rooms and arranged ambushes. The other two areas feel like places, that their rooms serve as a place to live and rule – this area feels like it was designed to be an encounter. The last room is the exception, containing a rather uninteresting boss – his weapon and armour are cool, but his moves are largely identical to the Old Dragonslayer fight from early in the game, save with a different weapon type. I didn’t have much fun with him. It’s unfortunate, since Brume’s design is incredibly strong otherwise.

Of particular note, especially given the issues with the bosses I outline above, are the ash idols – grotesque monstrosities that provide deadly hazards for certain rooms and even entire structures. They’ve got a wide variety of effects to hinder you, from cursing the entire area to cloaking nearby enemies in a shroud of ashes that render them difficult to harm. Hunting them down and destroying them was actually entertaining, and requires special items, whose rarity feels genuine. What’s more, their existence is an alternative to providing a simple boss encounter, but rather by creating an antagonist that influences the entire level itself, giving several goals to fight through hordes of enhanced foes to finish the encounter and collect their prizes.

Overall, I had fun with the DLC, and found it to be an enjoyable edition to the game – but it could have been better, with a bit more boss variety. The issue with these DLC is that they need to provide unique experiences, differing from the core game. Sunken King did that with one of the best bosses in Dark Souls 2 and with clever mechanics, but suffered from some concept overlap. Old Iron King has great designs both for characters and for levels, but the bosses could use more variety.

If you bought the season pass, you didn’t waste your money yet. The Old Iron King’s domain is a solid addition overall, but the journey is more important than the destination. The Ivory King’s wintery domain will tell us if those who put down money for all three in advance will be rewarded for their trust.

The Crown looks pretty great, though.

Sunken King did that with one of the best bosses in Dark Souls 2 and with clever mechanics, but suffered from some concept overlap. 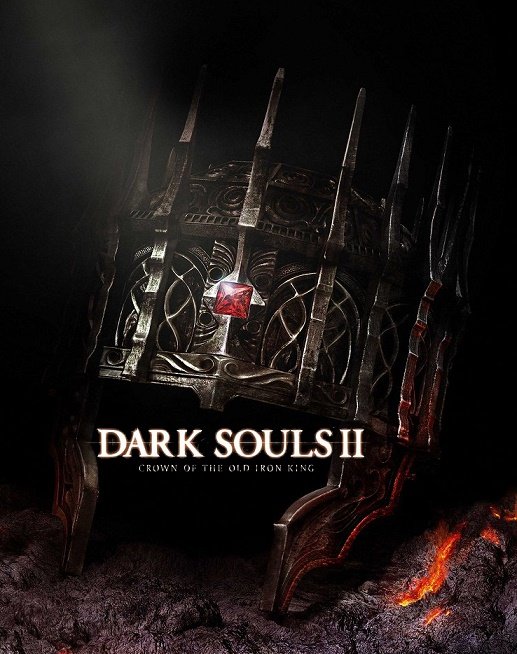