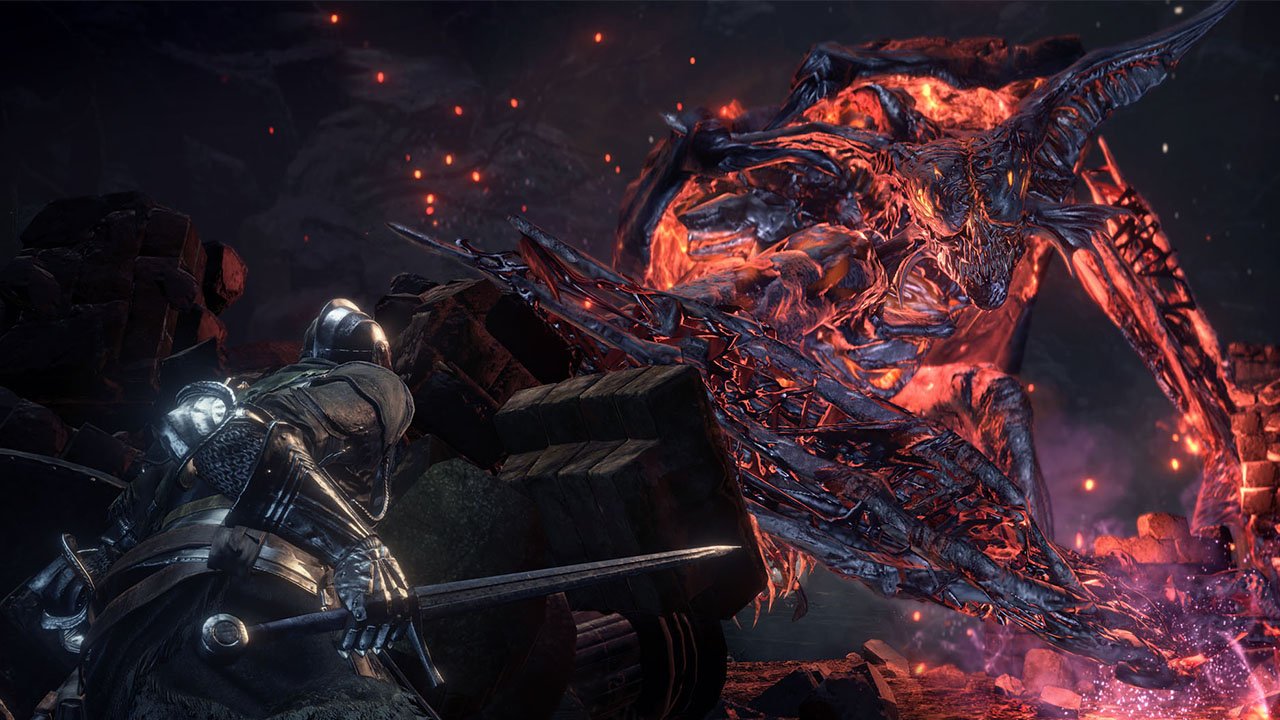 With The Ringed City, we are receiving the final adventure in the Dark Souls series. Talk about an end of an era. The franchise’s’ unique gameplay has essentially created its own sub-genre of action RPGs, with games like Nioh wearing the influence proudly. However, nothing quite feels like a Dark Souls game, and The Ringed City DLC is about as quintessential as it gets in most respects, but strangely lacking and unfamiliar in others. This is both a good and a bad thing, in a way. Fans of the series’ famous boss fights and notorious difficulty are sure to be delighted but those players looking for the labyrinthine, interconnected world design or some answers to the questions raised over the series’ three major entries will be left wanting.

For those looking for the former, the new DLC is wonderfully difficult, and is easily the most challenging in the series so far. This review was completed with a lvl 122 Pyromancer build, specifically designed to stomp through PvE. Of course, I got rocked by a few invaders and the PvP sections were out of my league, but that’s nothing to do with the game itself as my build was not focused on battling other players.

Low-level enemies can easily kill you in a few swipes, and some of the medium-sized fellows (like the ringed knights) will offer a heck of a battle. Now, I do have a major issue with the addition of some gameplay elements that ramp up the difficulty, but not in a fun way and certainly not in a way that Souls vets will find familiar. Early on in the DLC, players are tasked with running through several areas, including plenty of ups and downs (the verticality showcased in The Ringed City is a huge aspect of the level design) while giant floating angels bombard you with lasers. Rather than methodically picking my way through groups of enemies and exploring the level, I basically spent an entire afternoon doing the same run over and over again until I could shut them down. This aspect of “artificial difficulty” rears its head again later on in the DLC when the game forces players to cross a bridge and avoid throngs of ghost archers that appear every few seconds.

I have no major qualms with gameplay like this, I just didn’t want to spend my last few hours in the Dark Souls universe doing speed runs and not actually fighting anything. Fortunately, The Ringed City does offer some of the best boss fights in Dark Souls III, including one of the most punishing and ridiculous opening battles in the series. One grievance I have is that the final “boss”, while a poignant and exceptionally melancholy (fit for the end of the series) was pretty easy and felt incredibly underwhelming, leaving me with an “is that it?” look on my face as I wandered around searching for something more climactic.

Some of the new weapons are grand, but unfortunately for those of us playing caster builds, don’t offer much. The only real Pyro weapon serves as both a sword and a pyromancy flame, but is weaker in both respects than a standard flame in the off-hand and weapon of choice in the main. Strength and Dex builds will find plenty to love, but once again reinforces the fact that From Software doesn’t seem to want their players to roll with caster builds. Some of the new armour looks great, the Ringed Knight set in particular looks super badass. Though I will admit I was not a huge fan of the Desert Pyromancy set as it looks like your traditional RPG women’s armour. It makes sense in the context of the series, especially when contrasted with the other, kick-ass armours, but it’s just one of those things I’ve always loved about the Souls games. If I play a female character, I want her to look cool, dark, mysterious—like the rest of the game’s aesthetic—not rocking a tank top, lots of cleavage and some thigh-high boots like every other overly-sexed female RPG character.

I won’t get much into the lore side of things as that’s something I feel is best left discovered and investigated on your own, but I will say that if you’re looking for closure, answers, or some kind of epic reveal, you’ll be disappointed. The Ringed City raises a few questions, barely answers some others, but remains just as obfuscated and convoluted as the rest of the series. Of course, this wouldn’t be a bad thing outside of the fact that this is the very last time (allegedly) we will get a Souls game, so it would have been nice to receive a bit more knowledge.

All in all, The Ringed City is a bit of a mixed bag. The levels are gorgeous, great throwbacks to the rest of the series, but feel way too linear and rushed—especially in some sections. The cryptic and ambiguous storytelling the series is famed for is there, but not in any capacity that feels fitting for the end of such an epic tale. The enemies are tough as hell, and the boss fights are fantastic, but are weighed down by irritating sections and gameplay mechanics that don’t jive with the series. The new weapons are great, depending on your build, but plenty of the new sets are radical and Fashion Souls players should be pretty stoked.

Not necessarily what players expected, it’s still Dark Souls and there is still nothing quite like it on the market.

The Ringed City is a fantastically punishing finale for the Dark Souls saga, but is held back by linear level design and an underwhelming story.