Deponia Doomsday sports gorgeous animations, and it easily has one of the most vibrant and colourful art styles around. It’s too bad the characters and writing pale in comparison. The surprising fourth entry in developer Daedalic Entertainment’s long-running adventure game series picks up right where the last one left off. Main character Rufus has a crazy dream envisioning the end of Deponia (the world). He wakes up to find everything is fine, until he encounters time travel and sets out on a confusing adventure to save the world, in the process venturing to the glamorous Elysium; a station/planet located above Deponia that’s strikingly beautiful and a total contrast to Deponia’s pollution and awful physical state.

For those who aren’t familiar with the Deponia series, I advise you stay away from this fourth entry for now, and instead check out the original trilogy first. Series newcomers will find it difficult to get into this world, characters, and the particular and often jarring way it tells its story. Deponia Doomsday is filled with childish jokes, gags, offensive remarks, and idiotic characters. Rufus is a vile and stupid individual that’s slightly sexist, racist, and has issues with transgender people. One moment in particular shocked me.

Rufus finally meets the first non-white character in the game after a few hours of playtime. A member of a mixed-race couple is moving into a nearby house and the only thing Rufus decides to say is, “Huh, there goes the neighborhood.” I don’t know if it was aimed specifically at the couple, but it sure seemed that way.

This one moment best summarizes the game’s tone and how often its jokes fall flat. The story is confusing as well, with the time travel bits making little sense. I spent the first two hours trying to find a way to save a couple of expensive champagne glasses from falling, and it required continually traveling back in time. It’s a dull affair that lacks any sort of urgency and excitement, and I continually asked myself why saving these glasses are such a big deal. The game’s reasoning for this is rather poor.

However, Deponia Doomsday’s production value is extraordinary. It’s looks exactly like a sunning and crisp Saturday morning cartoon, and all of the animations are well made and lively. The way Rufus walks, runs, and grabs certain objects are all visual delights, and it’s evident the studio put in a lot effort here. Just simply grabbing a bubble wrap off the ground or using your blowtorch dazzled me.

The world design is just as great. Deponia’s crumbling state—what with its poisonous green water, and garbage that litters the streets—is expertly juxtaposed with Elysium’s beautiful and ambitious skyline and Renaissance-era architecture. It actually reminded me a great deal of Columbia from BioShock: Infinite. In these alluring locations you’ll spend your time solving puzzles with the click of your mouse. Deponia Doomsday’s gameplay is similar to what you’ll find in most adventure titles. Closely examine clues and objects in your surroundings, collect them, and figure out ways to combine them in order to solve the puzzles halting your progress. One of my favourite puzzles involved luring a lizard through a maze in order to secretly hurt one of the characters. Most of the puzzles are interesting, except of course for the game’s beginning portion and its obsession over champagne glasses.

Deponia Doomsday also features a stellar voice cast, with Metal Gear Solid veteran David Hayter leading the charge. Just like its animations and art style, Daedalic went above and beyond acquiring an all-star cast and it shines through.

Deponia Doomsday is an experience hardcore fans of these series will love. Its humour is as crude as ever, the story is confusing, and its characters are still missing a few vital brain cells. But with a beautiful art style and interesting puzzles, Daedalic has delivered yet another solid adventure game. 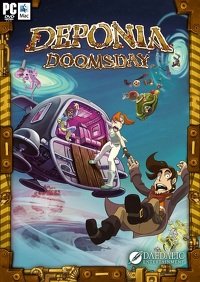