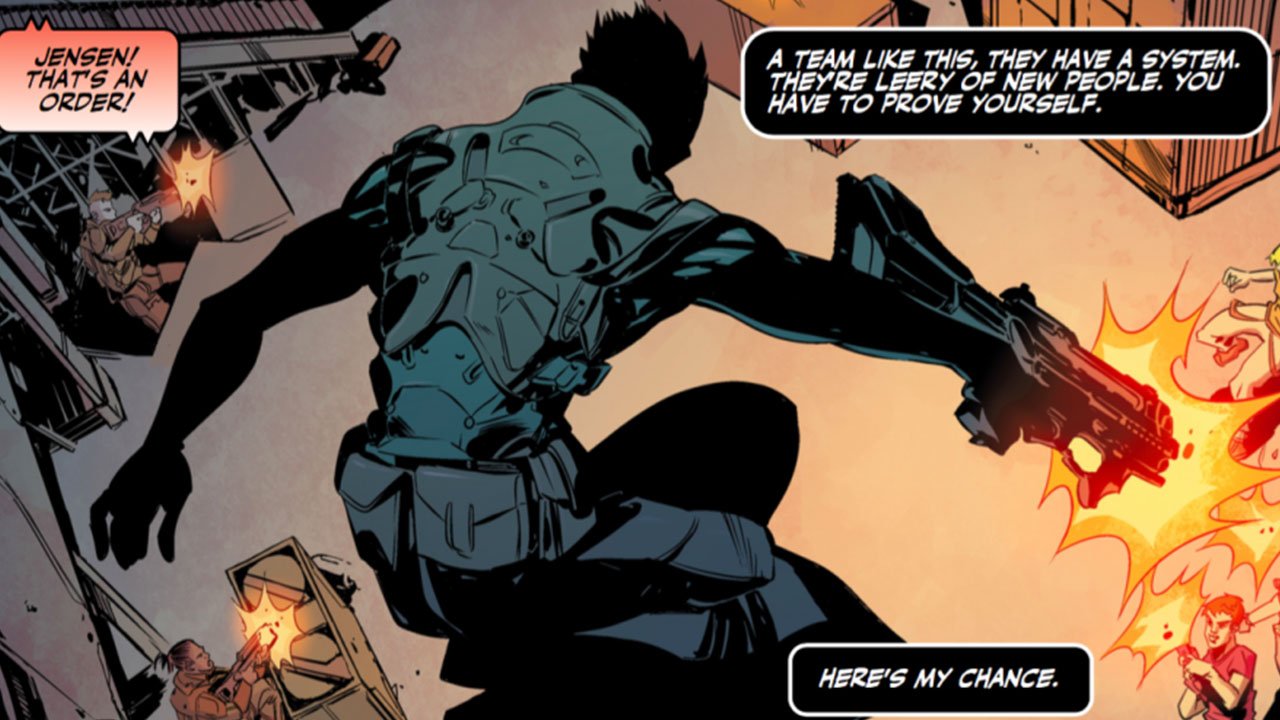 Videogames adapted into comic books have historically been a gamble. Despite the fast clip of sequential art allowing for a moderately successful replication of kinetic action, something always feels lost in translation from screen to page.

And while the first issue of Titan Comics’ Deus Ex Universe: Children’s Crusade series is exciting at points, no augments on the market could spice up what otherwise feels like a run-of-the-mill techno-thriller.

Conceptually, the narrative in the first issue (which is self-contained) feels very much like the first mission we saw in Deus Ex: Human Revolution. Adam Jensen and his squad go into a facility under siege by a group of terrorists. It starts out as a stealth mission, evolves into a firefight, then spills over into a dialogue-heavy morality play for the rest of the book. All of this takes place in one warehouse, leading to a micro-story that feels very much like a first mission to a game, and not much else.

That isn’t say there’s not cool stuff at work here. The terrorists’ central crime is kidnapping and forcibly augmenting children, which breaks their brains in so many ways. It’s a fascinating concept, and one that I hope is expounded upon in the remaining four issues. What do we know about this group? What do they hope to gain? Why children? We don’t know, and I’m genuinely curious to find out more.

Oh, and the writer managed to slip in an “I never asked for this” reference in the penultimate page. Hat’s off to that.

What helps break up the aforementioned feeling of being a tutorial level in a video game is the fluid, expressive art and brisk paneling. While, perhaps, Aggs’ art isn’t the most detailed and polished, it has a distinct crispness and flow to it that helped me stay engaged with the action. His attention to character poses and facial expressions helped me feel engaged, even when a whole lot wasn’t really happening. I also look forward to more action sequences, as his forte is clearly in dynamic shootouts and fisticuffs; the opening salvo of action was definitely the high point of this issue.

The first issue of Deus Ex Universe: Children’s Crusade is not perfect, and certainly, it suffers from feeling a bit too much like a video game adaptation. The basic narrative structure in this issue, plus shoehorned attempts at reminding you that this was, surprise, based on a game (such as a somewhat silly HUD view panel,) reminds one of the limitations of adapting an interactive medium. At the same time, there’s a lot of potential in the overarching plot, and I’m eager to see where it might go, and how it could tie into the larger Deus Ex canon.

I never asked for this, but it’s alright in my book.

And while the first issue of Titan Comics’ Deus Ex Universe: Children’s Crusade series is exciting at points, no augments on the market could spice up what otherwise feels like a run-of-the-mill techno-thriller.