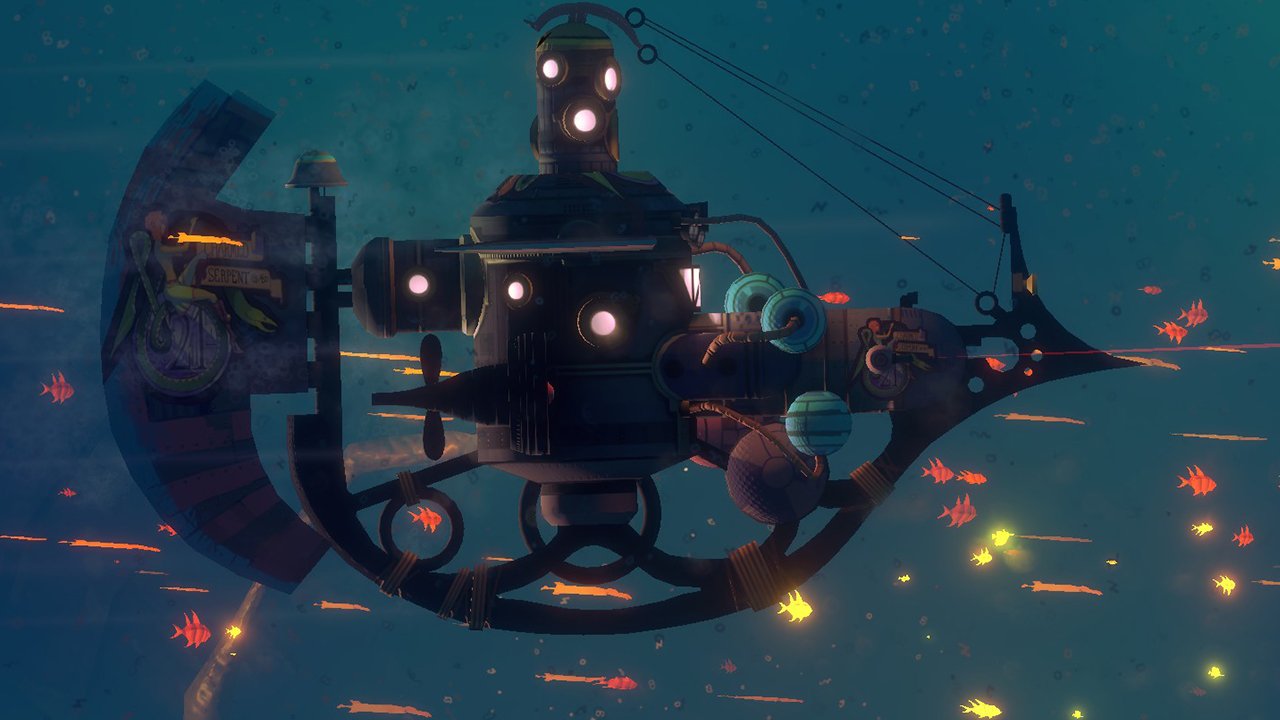 There aren’t enough submarine games in the world. Sure Song of the Deep just launched, but that’s beside the point. Oh, and I guess you can count the Silent Hunter series, and Steel Diver on 3DS. So there are some submarine games out there, but not enough! Hearing our pleas, Diluvion comes to the rescue.

I know jaws no longer drop to the floor upon hearing the term “Souls-like,” (which is basically a derivative of “King’s Field-like” or even “roguelike“), but that’s sort of the atmosphere Diluvion is going for with its creepy but wonder-filled subterranean crawl. This is a tried and true open world game, with progress gates, upgrades, and plenty of battles to wage. Where it separates itself from the crowd is the emphasis on the crew, which reminds me of the very same mechanic from Skies of Arcadia.

It never quite reaches full RPG status, but interacting with your crew is a nice touch. It moves the plot along and makes them feel like they’re actually a part of the adventure, even if it at times feels a tad scripted (in a gamey “let’s move this along” sort of way), and static (there’s no voiceovers). Its big hook is the swap to 2D hand-drawn art, which definitely sets Diluvion apart from the crowd. I especially love the little details like a missing chunk of ear on your sub’s Helm Officer.

Just like the lore it’s a tad under baked (the world is in the state of a “Great Flood,” which has trapped humans under a layer of ice) but by no means does it ever feel like fluff. That’s in part due to the meat of the game being so heavily focused on exploration, which Diluvion does masterfully. There are three distinct zones to travel through, with towns and plenty of enemy types to dance around and pick up on. The bars in particular help bring life to the universe, showing that while things are dire and the world is in a degree of disarray, it’s still human, and these people are still clinging to their existence.

I especially noticed how different each section felt after changing submarines, which is a lot like switching weapons in an action RPG. Starting with the Mariana, which can blast anything out of the water (but lacks speed) felt like night and day when juxtaposed with the lightning fast Glaciem, where it’s generally smarter to avoid fights. Re-assigning crew to bolster weaponry, movement, or sonar capabilities—even on the fly—is a welcome mechanic. Either way, there is a “golden fish” breadcrumb line to your next objective when tackling main quests, which while a tad too streamlined for my tastes ensures that players will never get lost in the vast expanse of the deep dark terrifying ocean that Diluvion takes place in.

All of the subs, even the aforementioned Mariana, are easy to control. With a simple left analog stick movement system you can change your speed by quickly pressing “forward” or “backward,” allowing complete control over the vehicle even permitting a simple “stop” command off of a radial dial. Plug and play controller support makes all of this even easier to deal with on PC—same with the instant “pop-out” compass that appears instantly around your ship. It looks beautiful while remaining functional.

There is an unfortunate feeling of cheapness to the presentation when it comes to tertiary elements. Many character models straight up repeat in the 2D conversational sections, and not in an endearing “all Team Rocket or Team Skull members look similar” sort of way. More like a copy and paste type deal. While those folks often speak of entertaining oddities like urine drinking competitions, the dullness of some of these locations in tandem with the lackluster and barebones options menu on PC (you have your basic resolution, FOV, sensitivity alterations, and key mapping, and that’s it) isn’t a winning combination. The screen is often too busy with dialogue, with no option to de-clutter the HUD, and checkpoints can be unforgiving and are unclear.

If you can look past that dicey veneer, you’ll find a lot to love in Diluvion. It could use a few patches to smooth out some rough edges, but if you like the idea of taking a sub down into the ocean and getting lost, get ready for a well-paced adventure.

Described as "Dark Souls underwater," this tactical action game is a brief, but fun little journey.