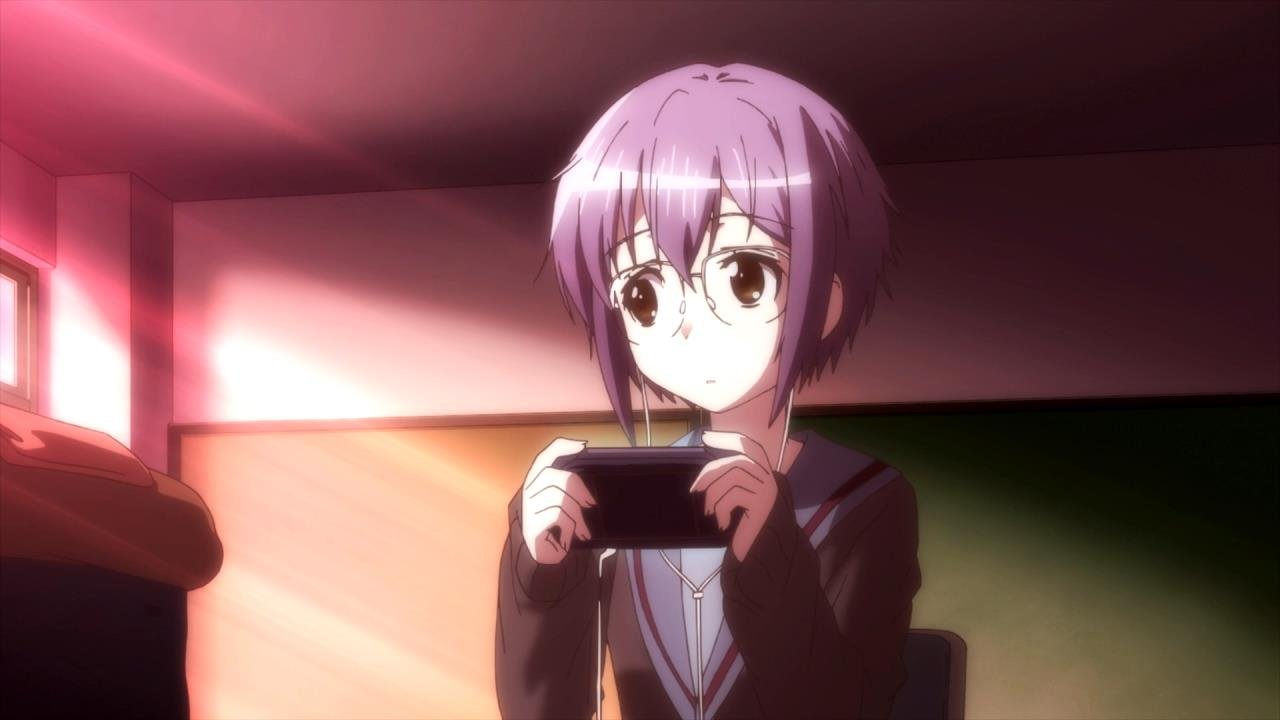 The Melancholy of Haruhi Suzumiya is a bonafide modern classic, and one of my personal favourite anime series. However, by leaps and bounds, its companion film The Disappearance of Haruhi Suzumiya is a better product. An almost three-hour epic, it takes the concept of the series and pushes it to its logical limit. On top of that, it establishes an entirely separate canon, with alternate versions of the main cast who have different personalities and motivations. The Disappearance of Nagato Yuki-Chan takes this separate canon as its basis, giving us an entire series set inside this alternate reality. It asks a simple question, “What would happen if the series was stripped of its fundamental elements, and switched genres entirely?”

The answer? A complete snooze-fest and waste of animation. Nagato Yuki-chan is the conclusion of the road that the original show paved a decade ago. It’s a show built around day-to-day inanity, wacky interpersonal hijinks, and awkward misunderstandings. Basically, it’s the same sort of slice-of-life show we’ve seen churned out, time and time again, in Haruhi’s wake. Unlike the original, however, Satelight’s pale imitator doesn’t do anything interesting with the set-up, like the multitude of imitators that have popped up over the past ten years.

Instead, we’re treated to the daily life of alternate world Yuki Nagato. Whereas the original was a calculating, quiet and introspective character, this one’s a total ditz—even worse, she’s an anime ditz. You know the kind I’m talking about. The kind that talks like a small child, seems developmentally stunted, and is a character that the show treats like a tiny animal as opposed to an actual person. The strong, nuanced Nagato is gone, and in her place is this insipid imitation.

Of course, that’d be all well and good if the show did anything cool with that. After all, this franchise is one built on taking worn tropes and twisting them in significant ways. But nothing like that happens here. Instead, we’re treated to sixteen episodes of Nagato pining after Kyon and feeling jealous that Haruhi seems to grab his attention. I hope you like generic love triangles, because boy, does this show ever have one, and it’s the basic gist of the plot. Nagato’s shy, she tries to tell Kyon she likes him, Haruhi gets in the way, Nagato whimpers. Rinse, repeat.

The one interesting thing about the series is a set of four episodes in which Nagato almost gets hit by a car. After this, she reverts back to her personality from the original series. This is a genuinely interesting premise, as she’s stuck in the body and mind of another her. For example, this Nagato knows that the other her likes Kyon, but she can’t force herself to feel the same. She’s trapped in the body of somebody she can’t relate to. It’s a terrifying premise, and for a moment, you think that this show’s been a big practical joke, leading up to this dramatic shift. For a moment, I was prepared to believe Nagato Yuki-chan was the next Blood-C.

As it turns out, however, those four episodes were the practical joke. After them, everything goes back to normal, and The Disappearance of Haruhi Suzumiya peters out into a whimper of a conclusion. Nothing changes and nothing important happens—heck, nothing really happens at all. Those four episodes amount to nothing but fan service for franchise veterans. They’re a cruel joke, reminding us of what this show could have been, had anyone competent been behind it.

The same can be said for the rest of the production. The Disappearance of Nagato Yuki-chan gives the characters redesigns that are spotty at best, unrecognizable at worst. On top of that, the animation quickly takes a nose dive, leaving us with a backwater bootleg take on beloved characters. The music is, at least, pleasant, and the opening and ending sequences are nice. The dub cast returning is also a great touch. But the rest of it just doesn’t click. It is, unfortunately, a bad production of a bad script based on a bad premise.

The Disappearance of Nagato Yuki-chan is not the third season we were hoping for. Instead, it’s a cheap, knock-off, dollar store Haruhi for people with low attention spans. Even worse, it manages to feel like one of the several dozen cheap rip-offs of the original show, and not like a genuine successor. A disappointment on practically all fronts, this is one show that I genuinely think even the most devout franchise diehards can avoid.

I can, at the very least, take small solace knowing that this version of Nagato is wiped off the face of the earth eventually. The original canon still counts, right?

The Disappearance of Nagato Yuki-chan is, ironically, a cheap rip-off of the very show it’s inspired by, and a complete letdown on all fronts. It’s another trite slice-of-life show in an industry infested with them. 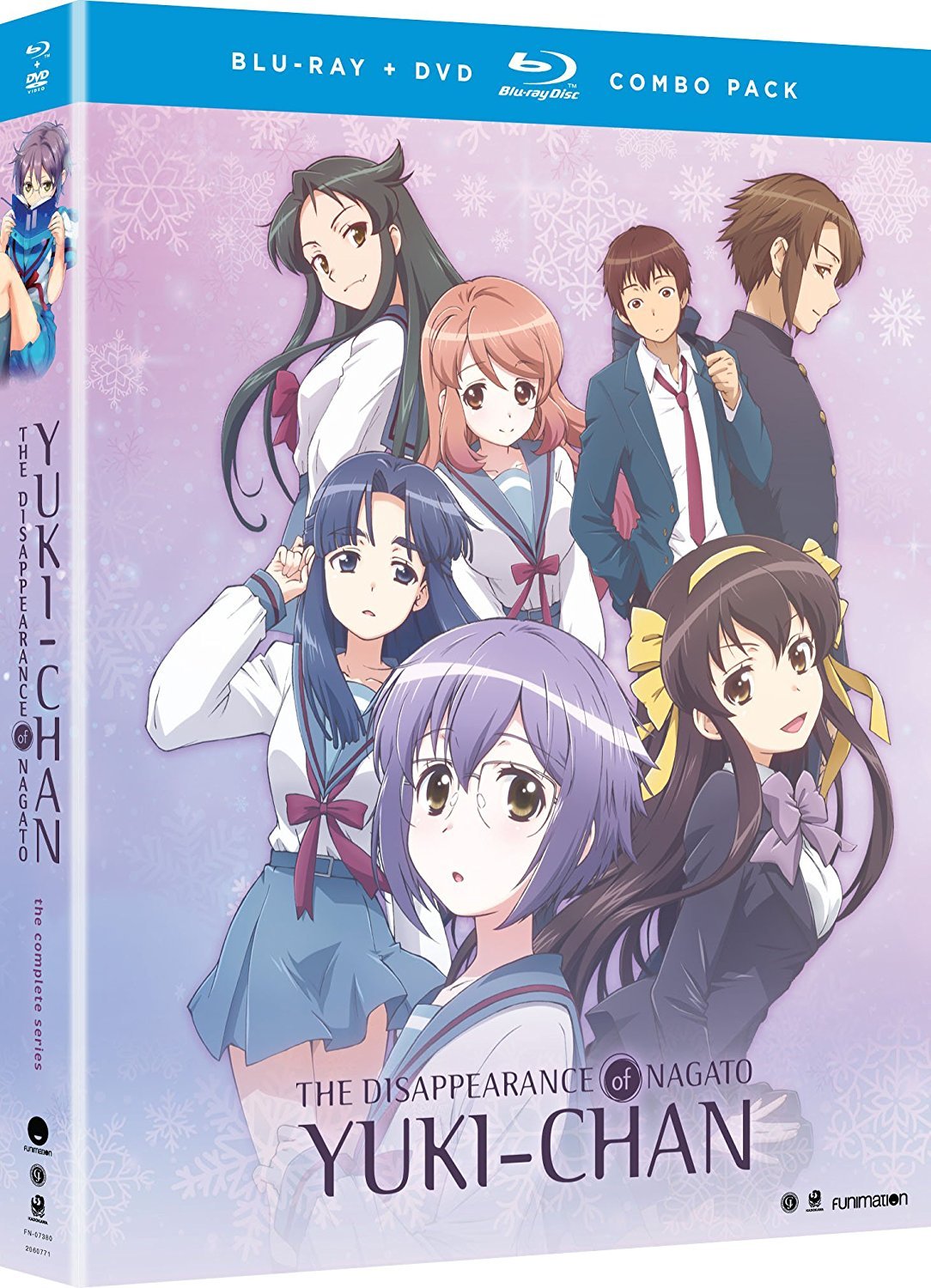