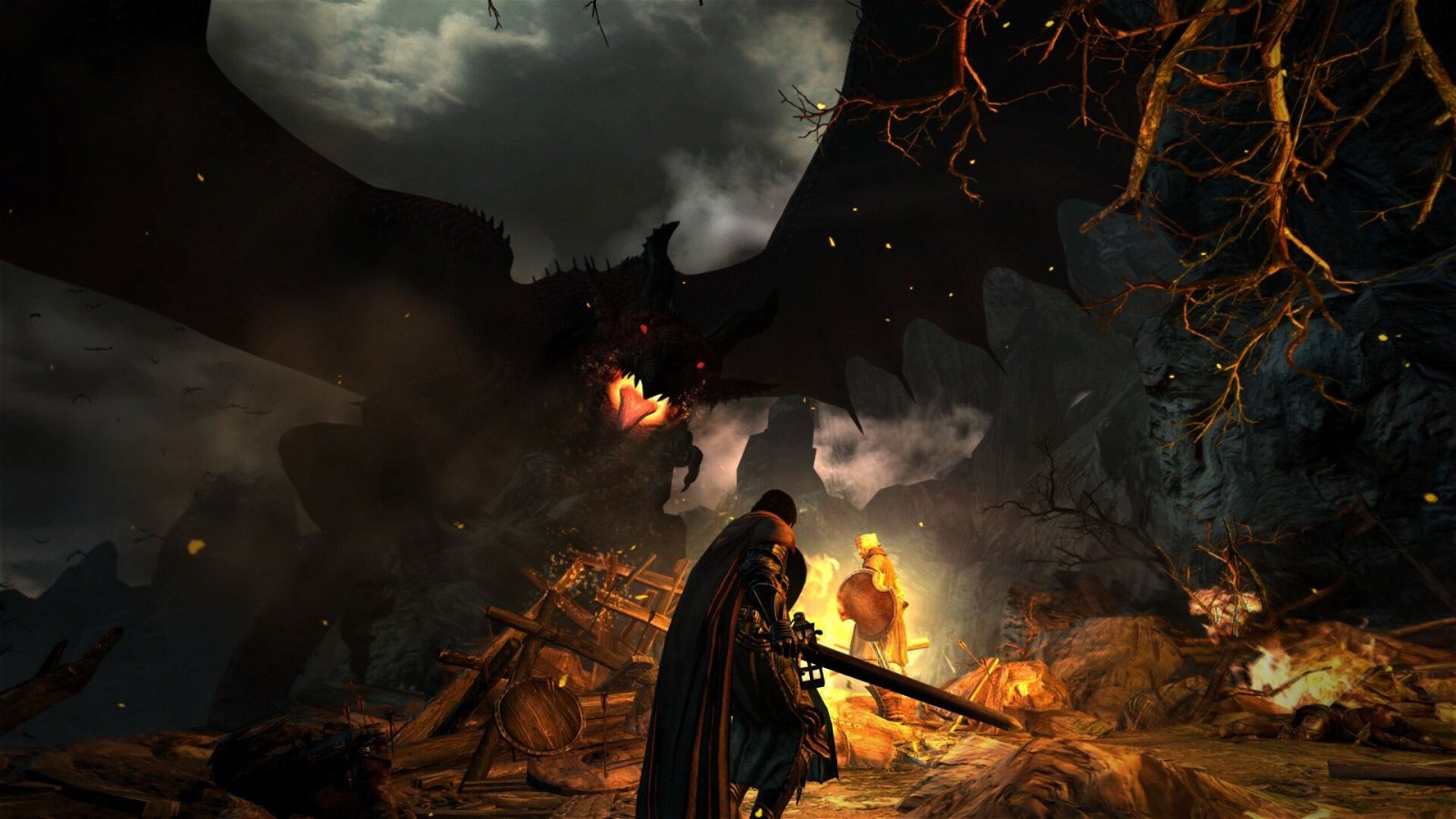 From the game’s opening battle against a Chimera, to a throw-down with a dragon moments later, and then finding yourself scaling a Cyclops after that, Dragon’s Dogma: Dark Arisen often plays like a frantic action game with an open world shell. Doing so with a party of custom chosen AI killers only adds to this wild feeling. Yet there’s something about the game that feels oddly lifeless and empty, dragging down what should have been an exciting fantasy hack and slash romp.

The game features a highly robust character creation system, allowing players to run a gamut of sizes, heights, and ages. Not that this is uncommon for character creators, but the visual appearance of these differences in weight, and age, all make sweeping changes to the character. Geriatric swordsmen, child mage prodigies, and true monstrosities are open to create.

Players can also choose from several classes—melee, magic, range, and speed—at the start, with more becoming available later. These have their own combat moves, most of which can be equipped to whichever button you like to be used on the fly during battles. They can also easily swap between two weapons with another button press, allowing players to shuffle through several combat builds in seconds.

This is handy since the fields throughout the game are far from empty. Many open world games offer a little bit of solitude, with enemies only showing up periodically—Skyrim and Fallout 4 can often be pretty quiet—but Dragon’s Dogma: Dark Arisen has foes popping up constantly. Rest feels like the most uncommon experience, making travel more exciting and dangerous, but also more tedious when you’re in a hurry and keep getting flanked by wolves or thugs.

Don’t expect easy fights, either. Taking a page from the early Dragon Quest games, if you head somewhere you really shouldn’t be yet, you’ll find high-powered enemies that will stomp you flat. This might have been a good way to indicate where the player should be going, but the game autosaves infrequently, and dying means going back to your last save, forcing some constant—somewhat annoying—manual saving, or even more frustrating losses of progress.

You would think you’d be able to survive a little easier when you have three AI companions with you. Dragon’s Dogma: Dark Arisen’s pawn system is arguably its most interesting feature, having players create or hire a couple of extra AI warriors who follow them into combat to back them up. These characters can be quite helpful, as they’ll fill in gaps in your character’s abilities, but they’re still just AIs, so don’t expect amazing quality backup.

Players will custom build one character, giving them a solid constant companion. The others can be drawn from an online pool of characters made by other players. The neat part of the online ones is that they come with experience based on what their creator has done with them. If they have already fought an enemy or know an area, they will provide you with information or walk the best routes—although these ones have a cost to hire especially if they’re higher than your level. Also, if someone uses your character online, they will bring back handy items.

The worst part about these characters, though, is they never, ever shut up. Turning off chatter is a must. However, they will still babble their words on screen, which can cover a section of the battle, which is almost more annoying.

Having a group makes each fight feel like a grand melee. The game isn’t shy to have you fighting almost constantly because you always have some backup to heal or battle alongside you, keeping the player swept up in the excitement of the fray. It can get irritating when they won’t disengage with a powerful enemy you’re trying to flee—as you need to revive them if you don’t want them to disappear from your party—though.

As for fleeing, running requires stamina—it’s the only thing that does—and your character has awful cardio. It’s very hard to put distance between you and a dangerous foe, as your character is constantly stopping due to exhaustion—although AI partners can refill some of it when they catch up to you. It’s worse when just travelling the fields, as you’re getting exhausted every few steps. It’s a nuisance when fleeing, but its downright enraging when taking a long walk.

Considering how often the player, three AI characters, and a ton of wolves or thieves might be duking it out, the game’s visuals run smoothly with few hiccups. The upgrade to PlayStation 4 visuals also looks nice in motion, but don’t expect something on par with Yakuza Kiwami. The game shows its age, with some weird looking faces and monsters—for example, the dragon from the opening battle. Its music is still gorgeous though. It has the ability to create a soothing mood or stir up a will to fight when the situation calls for it.

Despite all of these aspects to make combat exciting, it feels like there’s little narrative impetus to go out into the world. While players often just strike out into the world and do what they want in open world games anyway, it often feels like that’s all there is to do in Dragon’s Dogma: Dark Arisen. Beyond taking on quests on boards that ask you to kill a set amount of enemies or foes in a certain place, the game’s vague, dull story rarely makes an appearance. It often feels like you’re just filling out grocery lists of monster executions instead of working through an epic quest.

It’s that lack of story and reasons to do things that left the game’s world feeling as lifeless as the AI pawns you create. Fighting is solid, having partners makes those battles feel delightfully chaotic, and the game can be a real challenge, but it feels like Dragon’s Dogma: Dark Arisen can’t create a good reason to go out and put these things to work.

Liked this article and want to read more like it? Check out Joel’s review of Dishonored: Death of the Outsider, or his review of the cyberpunk thriller, Ruiner!