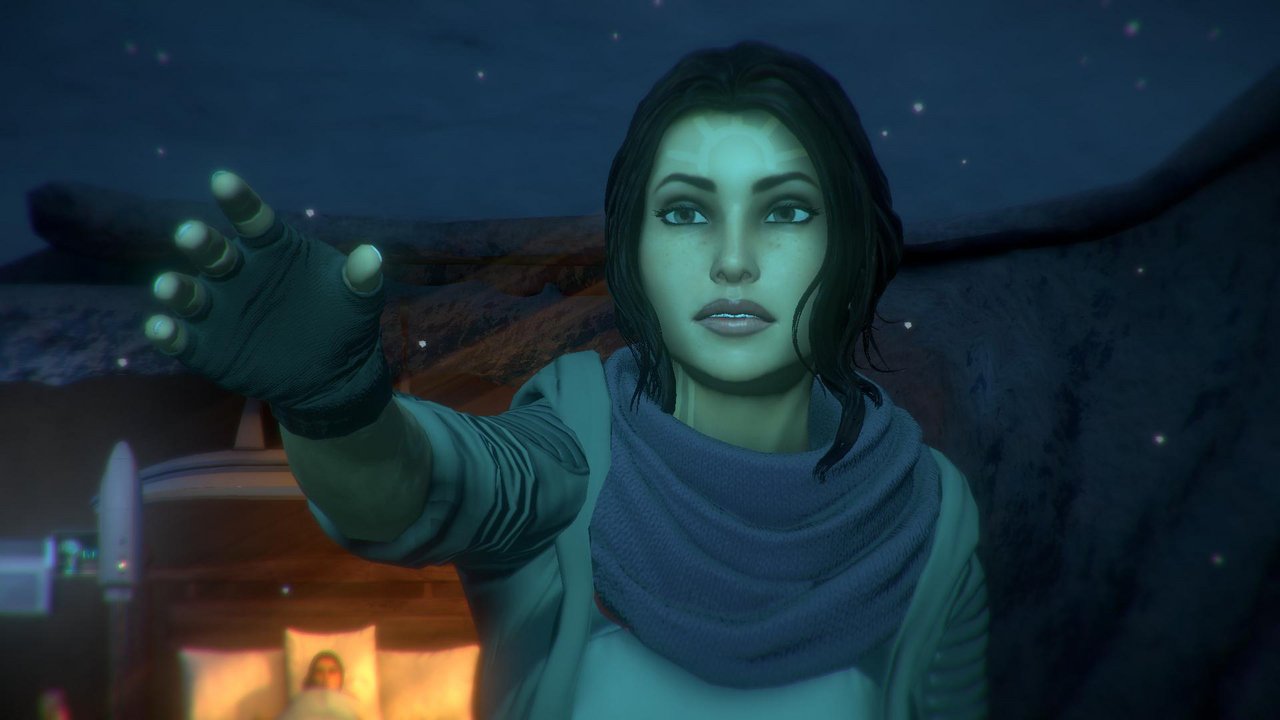 Sweet Dreams are Made of Bits

The previous two The Longest Journey titles are remembered by many with passionate fondness. I hear praise lavished upon the writing, the characters, the lovely lore built into the world. From what I’ve gathered, the previous title closed in a way that stoked a burning hunger for continuation with a few cliff hangers. In early 2013, the clamour was answered with a Kickstarter campaign run by the series’ creator and his mix of faces old and new. Now, a month ahead of expected delivery dates (fancy that!), we have the first episode of Dreamfall Chapters. It’s an adventure that speaks to many of the strengths of its predecessors while stumbling through other key efforts.

The game speaks of rebirth, of beginnings and endings and stories. The life of a raven-haired woman is honoured with a strikingly beautiful burial at swamp and a man, appearing as a streetwise greaser tempered by a decade’s adulthood, waits to welcome his child into the world. Zoe Castillo, the heroine of this game and the last, gazes down at her comatose body, her tale indefinitely suspended by the tragic turn of events in Dreamfall.

We join her in a world between others – a jagged snowscape where gateways to dreamers’ worlds flit into existence. She’s spent her time in spiritual exile by helping others, easing the nightmares of dreamers. We follow her into the fizzling, angry blips that represent unpleasant dreams. Her small palette of dreamwalker’s powers are used to solve simple sequence puzzles and guide the frightened minds of sleepers back into wakefulness, her exhausted sarcasm warning them against the dangers of addiction and personal consumption tied to the use of a Dreamachine. Zoe hates that thing. Unfortunately the dreamers rarely learn. I suspect that the months she’s spent discouraging its use has bled the venom from her effort.

She’s adept at this – she knows the rules of this world, even if I haven’t a clue what’s going on. Rather than feeling lost, though, it’s like falling into the stream of a tale whose details simply aren’t necessary right now. The laws of the lore will define themselves naturally and you needn’t worry, it assures.

Similarly, Zoe’s personality feels so strongly established that the game felt no need to explain her to you. There are no ostentatious displays of character, no hamfisted methods of twisting your ear and shouting “Isn’t our character unique and interesting?!” As you interact with the objects scattered about and draw comments out of her, who she is is softly and deftly present in her word choices, mannerisms, and thoughts. Even through such a brief stint with her, she’s easy to know.

It might seem obvious that this should be the case, given her veterancy, but there’s a big difference between merely adhering to somebody else’s prescribed set of adjectives and expressing a confidence in a character’s legacy and environment to the player. Perhaps the game’s greatest success is the sense of exquisite history and continuity carried through in the excellent writing: it’s easy to step into the stream of strange and compelling things that began before you arrived and trust that it knows its course and destination. As a new player, it’s easy to catch up, even if the exposition on past events grows a tad dense at times.

Eventually, events transpire to place Zoe in the mundanity of a futuristic waking world filled with polymer comforts and cheap, vat-grown organs, with no memory of the time her mind spent wandering the other place. From over her shoulder, we poke around a city dense with interesting details. In this point-and-click adventure set in 3D, objects of note reveal prompts when brought to the centre of the screen, a sideways glance denoting her focus. Most of these see her voicing her thoughts. Important characters will float clickable topics of conversation or beset us with ultimatums – the latter of which, the game promises, will be remembered and relevant down the line. Eventually. Very rarely, an item from Zoe’s inventory will need to be dropped onto a prompt to continue, but most of your handwork will concern moving Zoe to the next point of interest and clicking on it.

Her new home is a fun place to explore. The city has a sense of life to it, and it’s generally enjoyable to locate the social circles she’s adopted and help her forge the beginnings of her new existence. Interactions with the characters therein range from banal to genuinely grin-inducing – Zoe’s remarkably foul-mouthed new employer is, despite being outwardly awful to everybody around her, particularly easy to love. She and those who suffer her wrath are frequently hilarious, and my favourite bunch of individuals so far.

This game hinges upon whether or not you enjoy these characters, because they are, by and large, all you’ve got to enjoy. Apart from the quite enjoyable introductory portions, very little happens. Dialogue, characterization, and voice acting can be excellent as they come, but they seem to serve as setup for what is to follow in subsequent releases. Portentous words were spoken, some fascinating teases appeared, and the game ended just as the story was introduced.

Now I’m left with a sense of frustrated potential – like I’m on the cusp of the yarn that’ll suck me into something I’ll love being lost in. I’m primed to care for these characters and invest myself in their hardships. I want to see this cast through what Red Thread has planned. Next to none of it presents itself in this game.

If you’re one of the eager fans who cannot wait to dive back into this world, the impression that this inaugural episode will appease your worries, rekindle an old flame, and inspire confidence in the game to come. It has certainly accomplished the latter with me. Unless you’re desperate, however, the sparse scattering of interesting stuff impels me to suggest that you wait until this story has drawn to a close before you turn the first page.

Zoe Castillo, the heroine of this game and the last, gazes down at her comatose body, her tale indefinitely suspended by the tragic turn of events in Dreamfall.