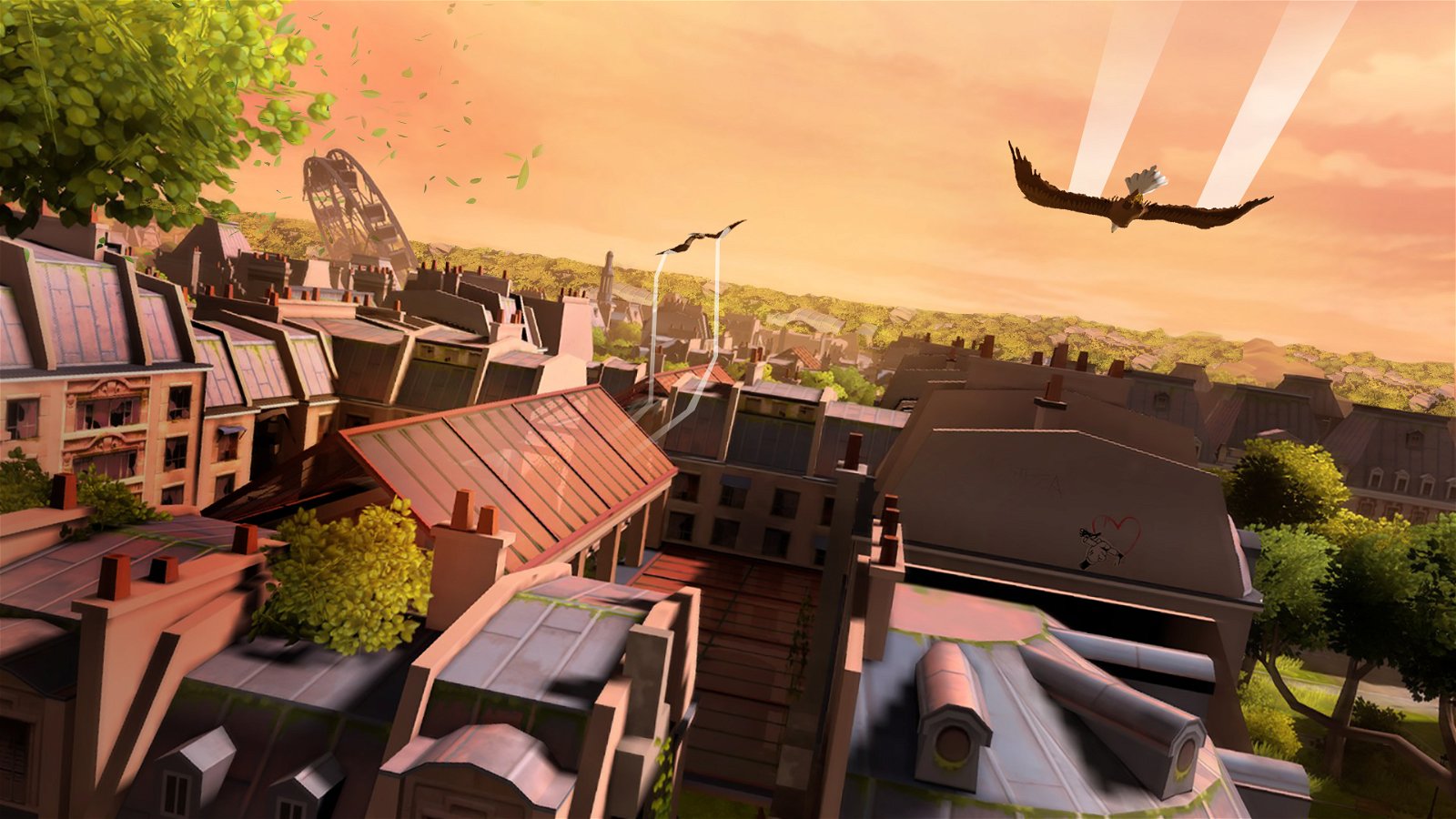 While one might assume that the title gives away everything there is to know about the game, you’d be wrong. Sure, you’re an eagle and you’re definitely in-flight, but Eagle Flight ends up feeling a lot more like a space shooter such as Star Fox than a carnivorous bird simulator.

Controls are simple and natural yet tight and responsive. Tilting your head to the left or right will cause your bird to pan left or right, but you can also turn to look left and right for the same effect, whichever feels more natural; I found myself doing a bit of both. Over time you’ll unlock the ability to attack other birds of prey via your eagle call, as well as learning how to shield yourself from attacks.

Combat is simple, as one projective eagle call will destroy any enemies that may be in your way, but when combined with the tight controls, the system just works.

The story mode, like all of Eagle Flight, is rather shallow but enjoyable. It takes place in Paris, France, which is now overrun by various animals after the end of humanity. As you might have guessed, you’re an eagle. You start by watching your parents help you hatch from an egg, then suddenly you’re an adult off on your own. What happened to your parents, I’m not sure. You then go about your life as an eagle, learning to catch fish, finding a mate, and taking down other birds of prey and bats. What little story is to be found here consists primarily of isolated plot points with no real development, which isn’t surprising, as the game is meant to be completed in around two hours. If you’re looking for an original or touching story, this isn’t the game for you.

The actual gameplay of the story mode consists of a few different types of missions, most of which are slightly different-looking variants of the same thing. For example, one of the first missions you do has you flying through a series of rings in a specific order in a race against the clock, while another type of mission has you racing through fish jumping out of the water. Sure, they are slightly different, but in the end, you’re just flying as fast as you can through very specific areas. Surprise,surprise: a game called Eagle Flight consists mostly of flying. Other missions have you finding feathers scattered throughout Paris, escorting and protecting other birds, or just taking down a certain number of other birds of prey.

Graphically, Eagle Flight leaves a lot to be desired, as the game looks like an early PlayStation 3 game with a PS2-era draw distance and pop-up graphics. Thankfully, most of the time you’ll be moving so quickly or so close to buildings it won’t matter. Plus you’ll probably be distracted by the game’s amazing soundtrack, which is at times i reminiscent of a Danny Elfman score.

Comfort wise I had no issues, meaning I played the entire game in one sitting and never felt sick or queasy. Ubisoft clearly did its research to make sure players didn’t want to vomit after playing this game, and other developers should take notes.

Eagle Flight also has a three on three multiplayer mode pitting teams of eagles against each other in an attempt to collect and return the carcass of a rabbit to their team’s nest. This mode plays out like a one flag capture-the-flag mode and would probably be pretty fun if you could track down other players to play with. I played during the evening and was only able to find two other players, and even being on a team by myself I still had fun. This seems to be a trend with many multiplayer modes in VR games at this point, as many games have seemingly no population due to the lack of wide adoption of this still fledgling technology.

This being an Ubisoft game means that the company’s DRM in sheep’s clothing, Uplay, is forced upon you, should you choose to play it on a PC. I and others had issues even getting the game to start when purchasing it through the Oculus Store thanks to Uplay refusing to recognize that we purchased the game. This issue had to be manually fixed for me by the publisher. This shows, once again, that Uplay does little more than punish paying customers while merely delaying pirates from getting games they have no intentions of paying for.

Uplay issues aside, Eagle Flight is an alright game. The controls are tight and the combat is serviceable, but for the $40 price tag it feels a bit shallow, as do most VR games thus far. The story mode only takes around two hours to run through, though with the optional collectibles and levels you might be able to squeeze around five or so hours total out of it before finishing it completely. It’s not a bad game, nor a great game, but an enjoyable one that had me entertained throughout, which isn’t something I’ve said about most games on the Oculus Rift.

The controls are tight, combat is simple, and Uplay still sucks, but this game isn't half bad. 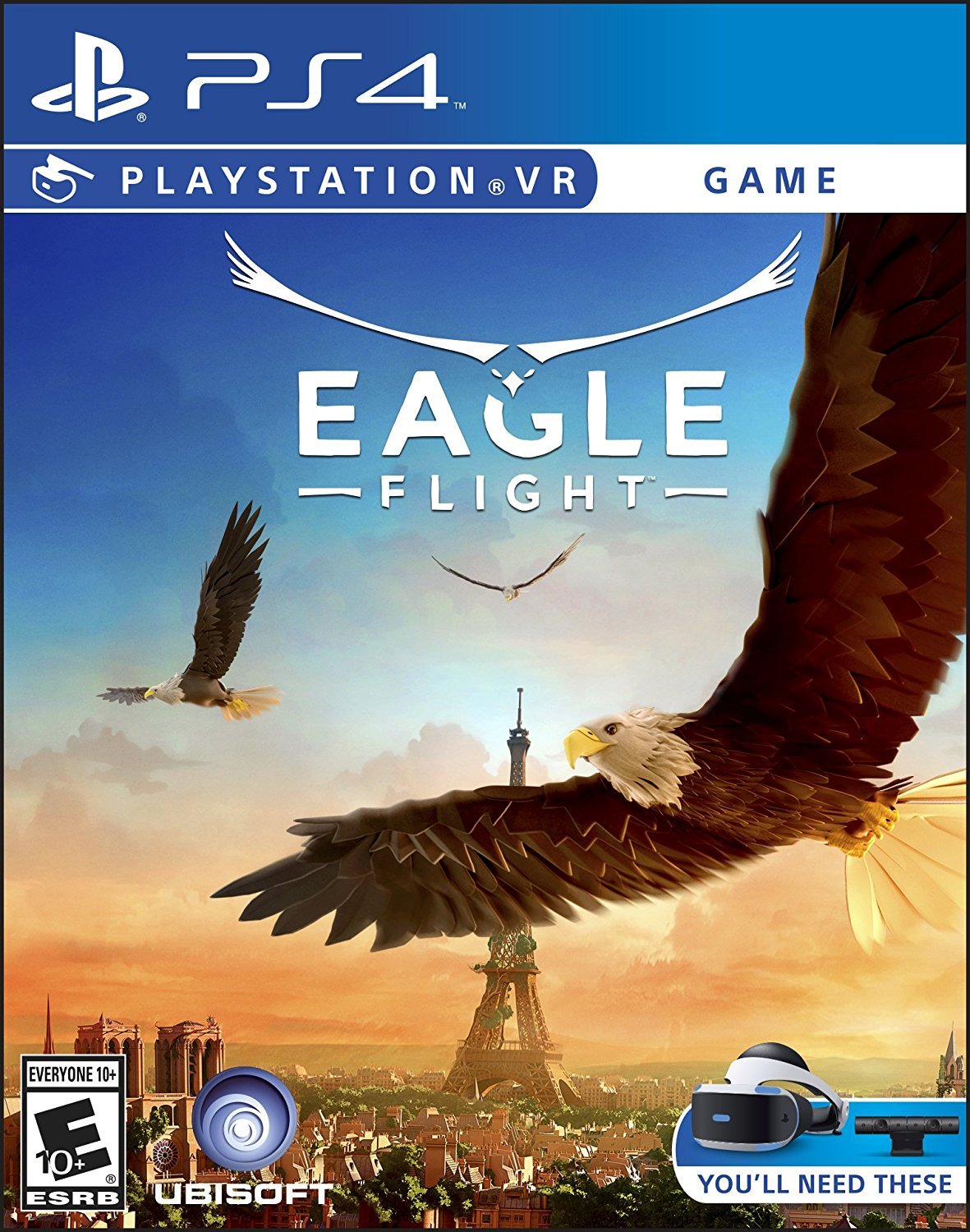