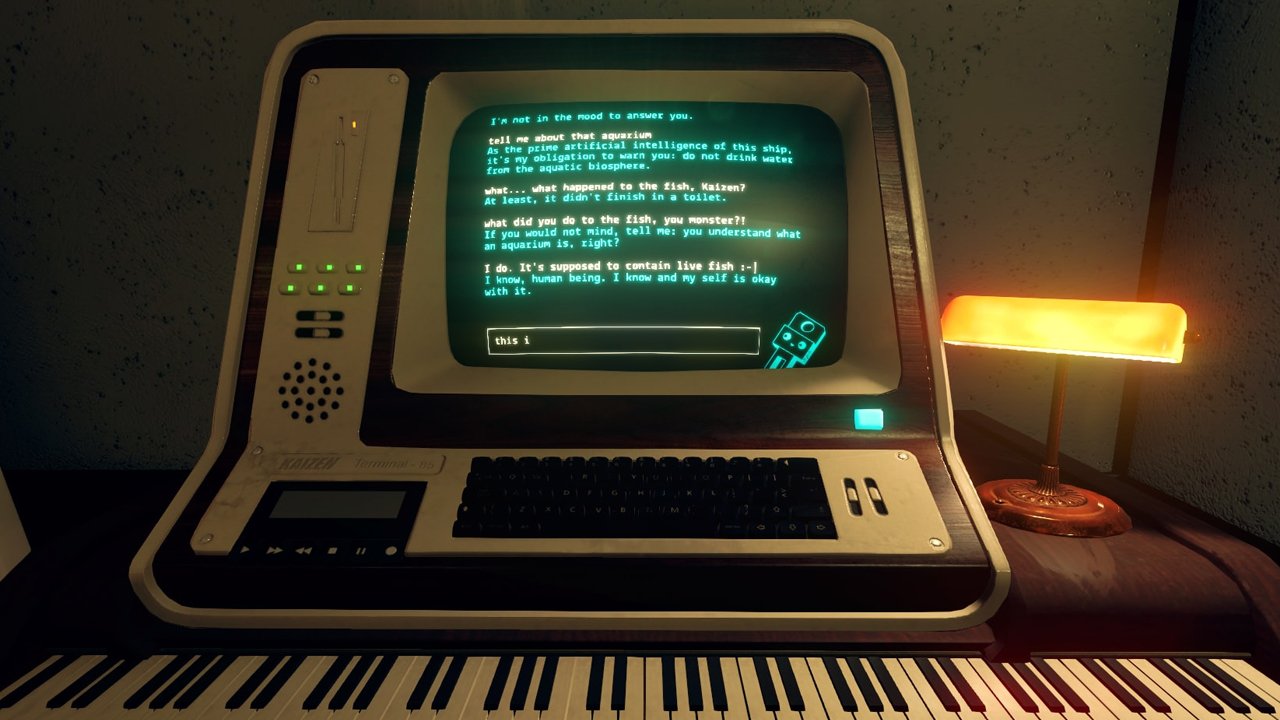 Now, the experienced among you will be immediately skeptical of such a system. Anyone who remembers playing old-school MUD games will be familiar with the historical limitations of such an interface. Many an attempt at roleplaying has been shattered by the realities of primitive if>then functions coded to respond to a set few keywords. In truth, Ocelot Society’s attempts to circumvent these shortcomings with an overwhelming amount of procedurally generated responses aren’t entirely successful. But, if I’m honest, it’s not entirely unsuccessful, either. I’ll elaborate on this point shortly.
Event[0] starts with a setup familiar to classic RPG players, involving a series of choices to establish your character’s name, back story, and rather interestingly, choice pronouns (including gender-neutral. Yay!). Shortly after this bit of seeding, bad things happen (oh no!), and you’re shuttled away into space where your escape pod comes upon a derelict cruise vessel. Think Titanic in space and you’ll get a feel for the purpose of said ship. Upon docking with the vessel, you’ll begin interacting with Kaizen. It’s alluded to early on that Kaizen is programmed to help alleviate depression and stress levels among humans in deep-space travel, but it’s easy to become immediately suspicious of the motives of an AI aboard a derelict ship.

Event[0] itself and the story in retrospect were underwhelming however, but it’s also hard to sell an homage to a cliché rogue AI story that can really blow someone’s mind. It’s a bit like trying to make a sequel to Soylent Green, I’d imagine. In that regard then, the system of interfacing with Kaizen is certainly the star of the show here, which leaves Event[0] in that awkward space that leaves it difficult to offer a blanket recommendation. I enjoyed it—thoroughly. I recorded hundreds of screenshots of interesting and horrifying dialogue with Kaizen, and kept thinking that it would be an amazing game to stream on Twitch, or to do a Let’s Play of.
But, to recommend such an experience to someone who has no acquired taste (or at the very least, nostalgia) for text interfaces would be silly. For someone like me, though, who can be sucked in by little more than the opportunity to attempt to force an existential crisis on an AI and a setup script that produces a Nietzsche quote, I was plenty happy to spend my time with it. Certainly, I’m intrigued to go back and see what happens if I don’t lose my cool and swear at Kaizen so much.