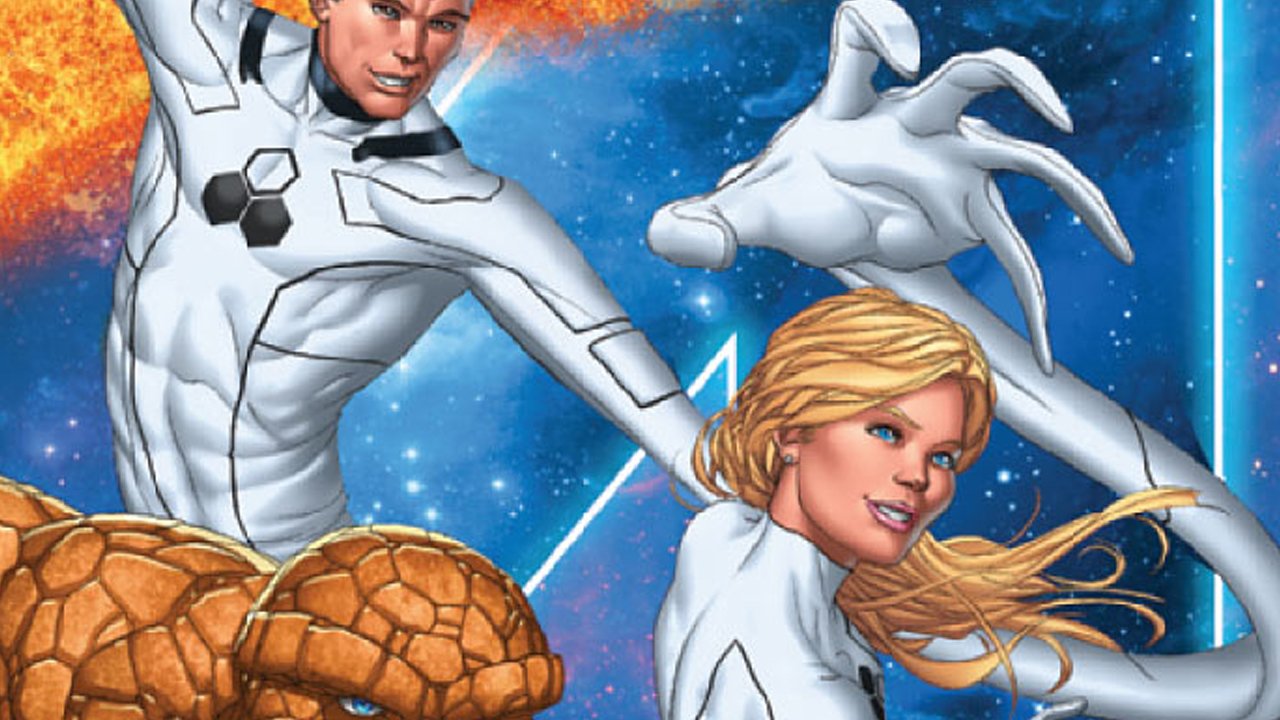 For over three years Jonathan Hickman has been writing the adventures of Marvel’s first family, the Fantastic Four, and this issue sees the story he’s been telling since that first issue finally come to a close.  Over the past few years I’ve become a huge fan of Hickman’s work, particularly his runs both here and on Secret Warriors, but I have to admit that his long-term plotting on this book might actually be superior.  Whereas at times Secret Warriors felt too lost in its own web of conspiracy and intrigue, this book has instead seeded ideas and concepts throughout, and over the past year we’ve seen the pacing speed up, as all of the disparate plot elements came together in a majestic, well-thought-out story.  Time travel can be difficult to use in comics effectively, but the way in which Hickman used it was far more clever and interesting, because the time travel is what helped put into motion so much of his run.  The future versions of Valeria and Franklin have been instrumental in getting the plot to this point, and this issue is the true payoff, as everything that Hickman has been building towards reaches its crescendo.  Although this is definitely the end of his sprawling epic of a story, this isn’t the end of his run on this book or FF, as he’s sticking around for a few more months still.  As such, although the main story beats for the epic have concluded, there’s still a lot left unresolved, but they’re left open in a very natural way.  Because Hickman doesn’t push himself to clean up all the threads neatly, it makes the climax of the story more solid, because he can focus on the characters involved in the big showdown.  There’s a fair bit of exposition in this issue, but it’s all worth it, as it’s neatly juxtaposed to Franklin Richards taking on the Mad Celestials.  Future Franklin Richards’ fight against the Celestials, plus his powering up a herald, is the highlight of this issue.

For readers who have followed this run through since Hickman wrote Dark Reign: Fantastic Four, this issue is full of payoff.  As the characters say themselves during this issue, the minute that Reed Richards first stepped through the Bridge, the course that would eventually lead up to this issue was set.  Hickman makes this issue so enjoyable because of how he’s expertly utilized the slow-burn writing technique to ratchet up the excitement and intensity of this storyline.  It’s hard to describe the feeling I’ve gotten while reading through this arc, as all the piece fell into place, as all the elements lead the readers to this point.  It’s immensely entertaining, and thus far this has got to be one of my favourite all-time Fantastic Four runs, a run which managed to tell various smaller-scale stories, while at the same time creating a sprawling mosaic which once completed is just brilliant.

The artwork this issue is handled by Epting, and although at first it’s a big change from last issue’s artwork by Barry Kitson, ultimately I think that Epting proved that he was the perfect artist to illustrate this issue.  There’s a lot of exposition in this issue, unfolding while the action takes place, and Epting proves himself more than up to the task, and knocks this one completely out of the park.  The shots of Franklin and his Herald are truly something to see on the page.

It’s hard to imagine how Hickman’s going to follow-up this issue, not to mention this mega-arc, but I look forward to seeing how he’ll wrap up the various loose ends and story threads that weren’t directly involved in this issue’s conclusion.  This issue was absolutely fantastic, a true gem, a fantastic ride that I kept hoping would keep going on, it was that good.  HIGHLY RECOMMENDED!