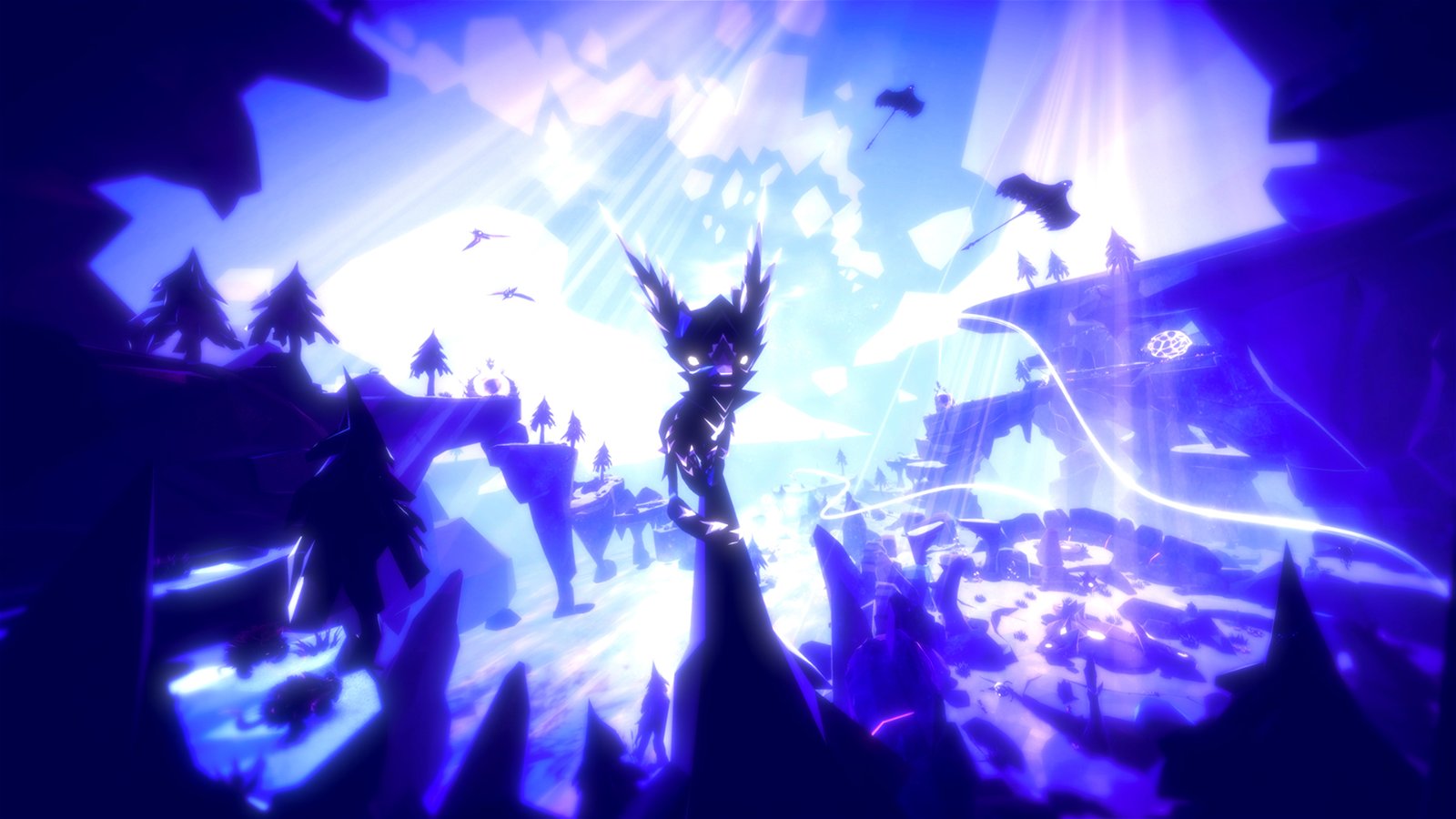 Fe is the latest title from Zoink!, developers who are mostly known for cartoony 2D comedy games like Stick it to the Man and Zombie Vikings, the latter of which released in 2015 that had a hidden Fe alpha level.

As a 3D platformer, Fe is a big change for the developer, as is being published by EA; two factors I hoped would help the developer finally make a game I enjoyed. Sadly, that isn’t the case.

The game opens with a cutscene showing five mysterious shapes crashing to the ground, one of which you play as. As a nameless lizard meets flying squirrel creature you wander around a mostly textureless world ‘singing’ with animals, then following them from one goal to another while jumping, climbing trees, gliding, picking up fruits and vegetation to use to solve simple puzzles, and hiding from robotic cyclops in the copious patches of tall grass.

That is Fe’s basic gameplay in a nutshell, and let me tell you, it is not great or even good. The characters movement has no momentum, unlike most 3D platformers, just one steady pace until quite late in the game when a run ability is unlockable. The jumping feels clunky and heavy which makes platforming more of a choir than an enjoyable experience, climbing trees requires pressing the jump button over and over while making sure not to press in any direction, and gliding is rarely enjoyable due to how stiff the controls are in midair. As objectives are often on the higher portions of levels, sometimes means traversing nearly the whole area again which is made even more punishing thanks to the controls.

Singing can be done a few different ways, none of which feel ideal as you have to get the pitch just right to communicate with other animals and it is more of an annoyance than an entertaining part of the gameplay. On the PS4 the pitch is controlled via the pressure sensitive R2 trigger, and on the Switch via tilting of the right JoyCon which is even less precise. Optionally, the pitch of singing can be controlled with a stick. As the game advances, different creatures tones are unlocked and have to be toggled to either via the d-pad or an on-screen selection wheel. The selection wheel means frequent stops to switch tones and using the Dpad is somehow not intuitive as what visually looks like it to should be up-left, or up-right is actually left and right.

The game’s loading screen encourages you to explore and says there are many different ways to finish the same scenarios, but in my experience, Fe is extremely linear. Early on in the game introduces a bird companion that can be called by holding down the sing button causing the character to a high pitched tone for a bit. Singing again causes it fly as a guide to the next objective, which is also highlighted on a mini-map that can be pulled up. While both these functions are completely optional, with the objective being marked on the mini-map being able to be turned off, I felt they were crucial.

The world’s design doesn’t always lend itself to making knowing where to go intuitive, and exploring is mostly a waste of time as nearly all of the collectibles (pink gems to unlock new moves, and hieroglyphics) can’t be gotten without backtracking with songs unlocked later in the game. So following birds, animals, and mini-map markers from objective to objective until the game is over and all the songs are unlocked for the post-game is essentially how the game seems designed to be played, regardless of what it wants you to believe.

Trying to describe the story of Fe is like trying to describe the story behind an oil painting hung in a museum with no outside context aside from a title. The whole game is presented as if it is very mysterious and clever when in reality it seems to be a barely there basic story about a good critter saving other critters from robots who have captured them. Almost every cutscene and the cryptic hieroglyphics are reiterating the same thing: these bad cyclops robots are taking animals captive. Thing is, the story doesn’t advance much more than that, at least from what I could tell. I’m not hunting down over a hundred hieroglyphs in hopes of getting any kind of story that wasn’t told to me through the main gameplay.

This brings me to another problem I have with Fe, why am I, as the player, doing any of this? What are my driving motivations? Why am I here? Where did I come from? The entire game I spent just following animals without reason or cause other than I had to complete the game for this review. I felt no emotions, even with a soundtrack that is heavy on music that would be played at the saddest of funerals.

I’ll give Fe this, it is pretty sometimes. The world is lit in singular colours most of the time, and the camera perfectly adjusts for cute moments of singing with the other animals. That said, I experienced some minor framerate issues and hitching when moving between areas on the PS4 Pro, whereas the Nintendo Switch version ran surprisingly smoothly while looking just as good.

Aside from a few graphical issues, at one point an object in the world didn’t load that was required to complete my next objective. I, of course, didn’t know this and thought “ah yes, the game wants me to explore now as notated in that loading screen.” I explored for over an hour before decided I was going to relaunch the game on my PS4 and see if something changed, or start a new save file. Thankfully, relaunching the game caused the required raspberry to load allowing me to advance. This was maybe twenty minutes into my playthrough.

Additionally, there are sections where you can see where the world isn’t fully connected as there are gaps in the graphics, also plenty of areas that look like you should be able to jump and scale them but can’t. If that were not enough, while capturing footage of the game, one of the interns fell through the world, and that was only after Fe hard locked the PS4 Pro causing the video team to restart the full system.

Fe is one of those games that is art for art’s sake but has little substance and isn’t all that enjoyable outside of a few pretty set pieces. The story is barely there and basic, the controls aren’t ideal, the soundtrack is overly sad, the player is given no motivations, and exploring is all but useless until the post-game which takes about four hours to get to. Worst of all, the platforming is just not fun, which is a cardinal sin for a game billed as a platformer.

Fe is an artsy and clunky platformer that feels artsy for arts sake. The story is barely there, the movement isn’t fun, and it is an all-around let down.