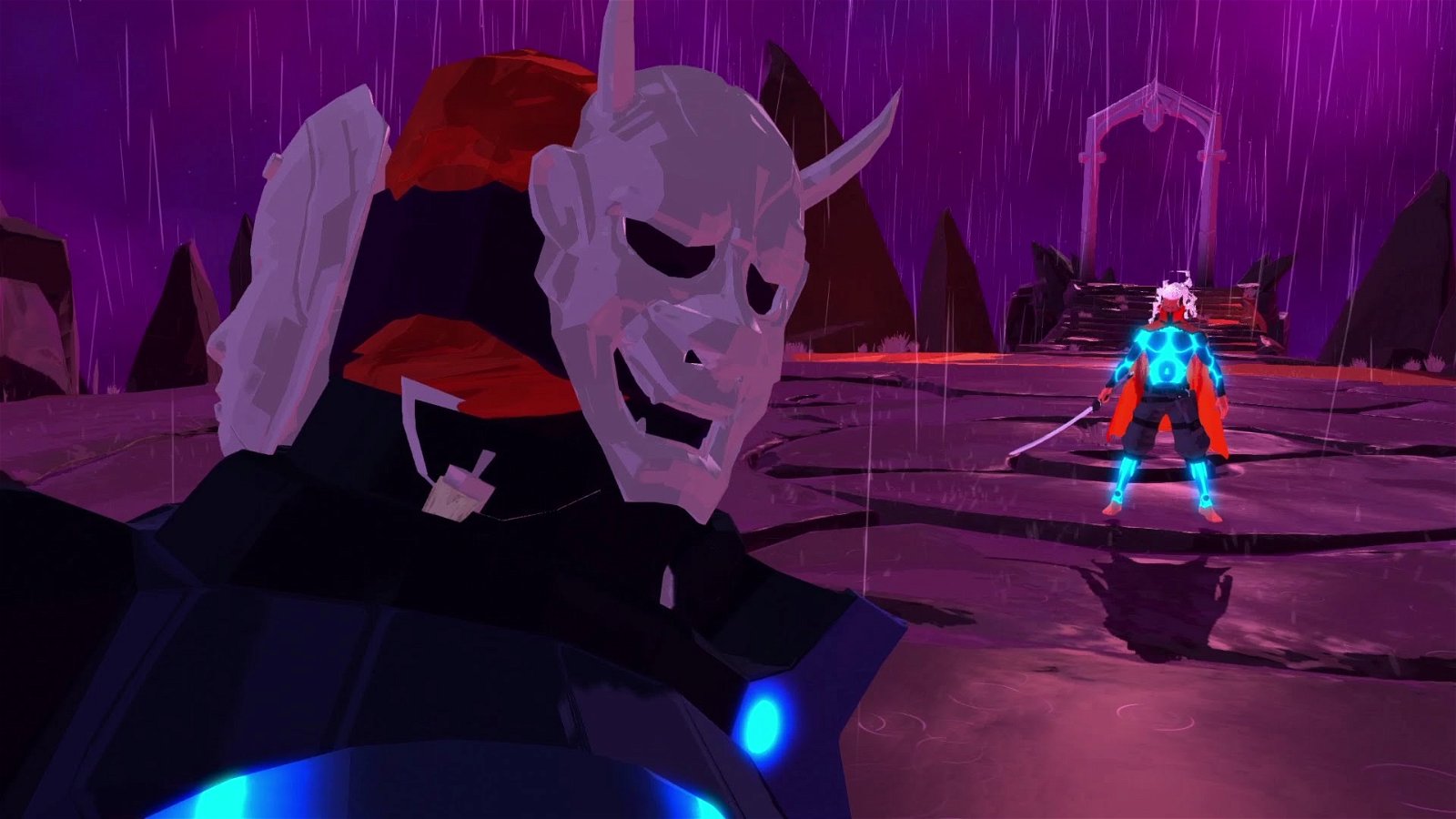 I’ve had dreams of boss-battle-only games. Titles that just cut out all the fluff and get straight to it — providing chills and thrills like the Vergil fight from Devil May Cry 3, one of my go-to encounters and near the top of my all-time best of list. Several modern MMOs have already adopted this approach, including Final Fantasy XV, which features several raid wings that just have boss battles and no trash pulls. In an increasingly competitive era of gaming, that’s something worth trying. It’s this sort of intense, non-stop boss battle experience that The Game Bakers’ Furi aims to provide. And although it achieves its goal with mixed results, Furi mostly comes out on top. 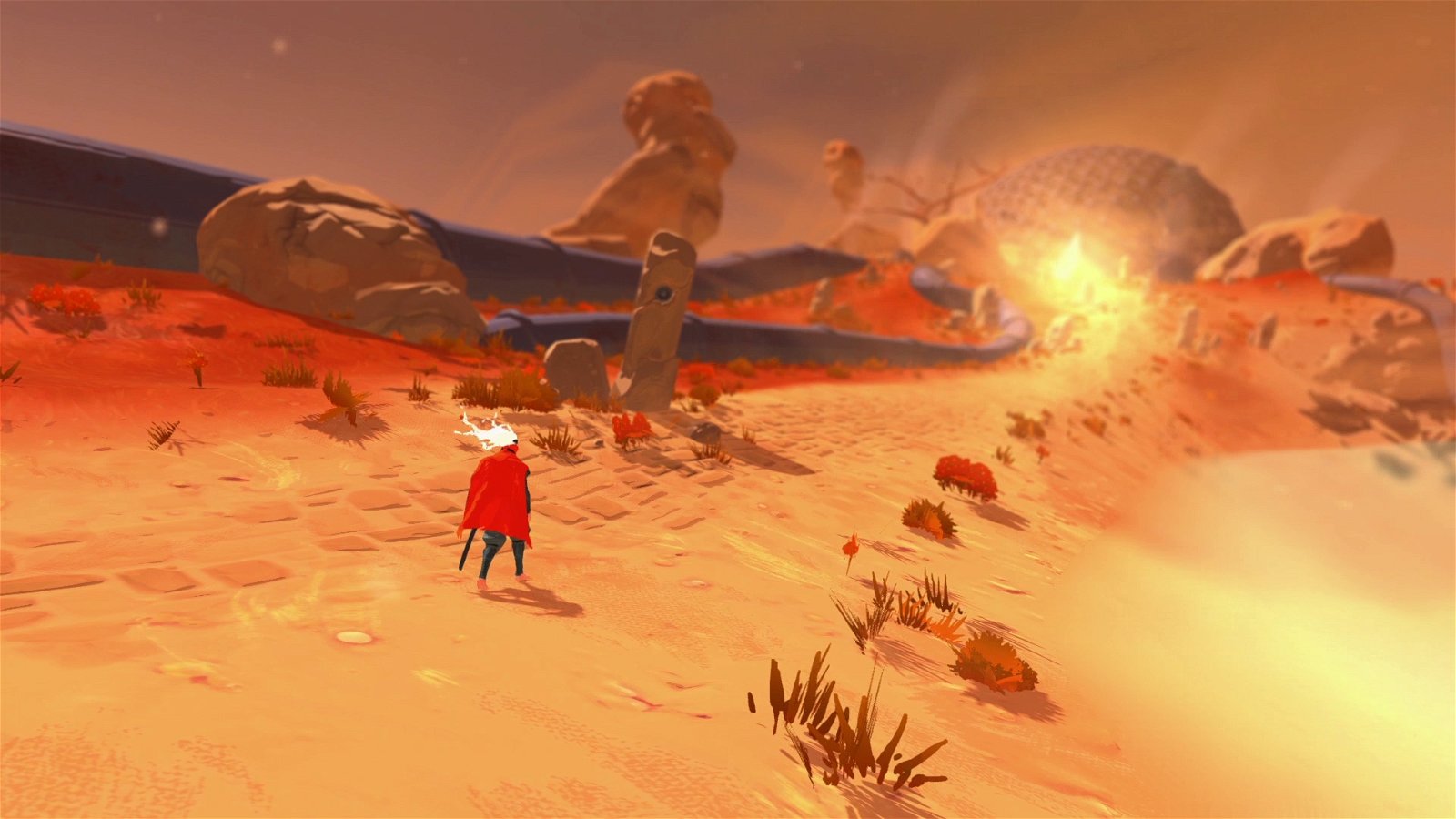 Starting off in the role as a shackled prisoner, you ’ll immediately notice Furi‘s very becoming art style. It’s bold and bright, but also muted when it needs to be, and I really dig the neon purple hues emanating out of just about every facet of the environment. It’s stylish and stunning, to say the least. The actual story? It’s a tad too edgy for my tastes. I’m absolutely fine with cursing, mind, but it’s used here mostly for shock value, contributing nothing to character or plot development. There were moments where I’d visibly cringe listening to the exposition scenes that follow each boss.

But again, those bosses are the game’s big focus, and Furi’s development team knows their stuff. After the tutorial fight, which t limits what you can do (forcing you to use different strategies at specific times to teach you the ropes), the sky’s the limit. Players can opt for a mostly ranged strategy, firing off potshots and charged shots to whittle down foes (or, perhaps more importantly, to cancel out enemy bullets), or get up close and personal, hacking away while also parrying enemy attacks (which returns health if timed correctly).

Both styles are generally viable, though at times you’ll be forced to employ one or the other as bosses either rush up on you and trigger close-up duels or back away and try to flush you out with bullets. And it’s hell, literally bullet hell, in the latter situations, as the game throws everything but the kitchen sink at you, then throws that in too for good measure. With a dodge that’s more like a teleport (and can be charged to adjust its range), you’ll find it really tough to acclimate to how much you’ll need to zip around, but by the fourth boss or so I had it down. 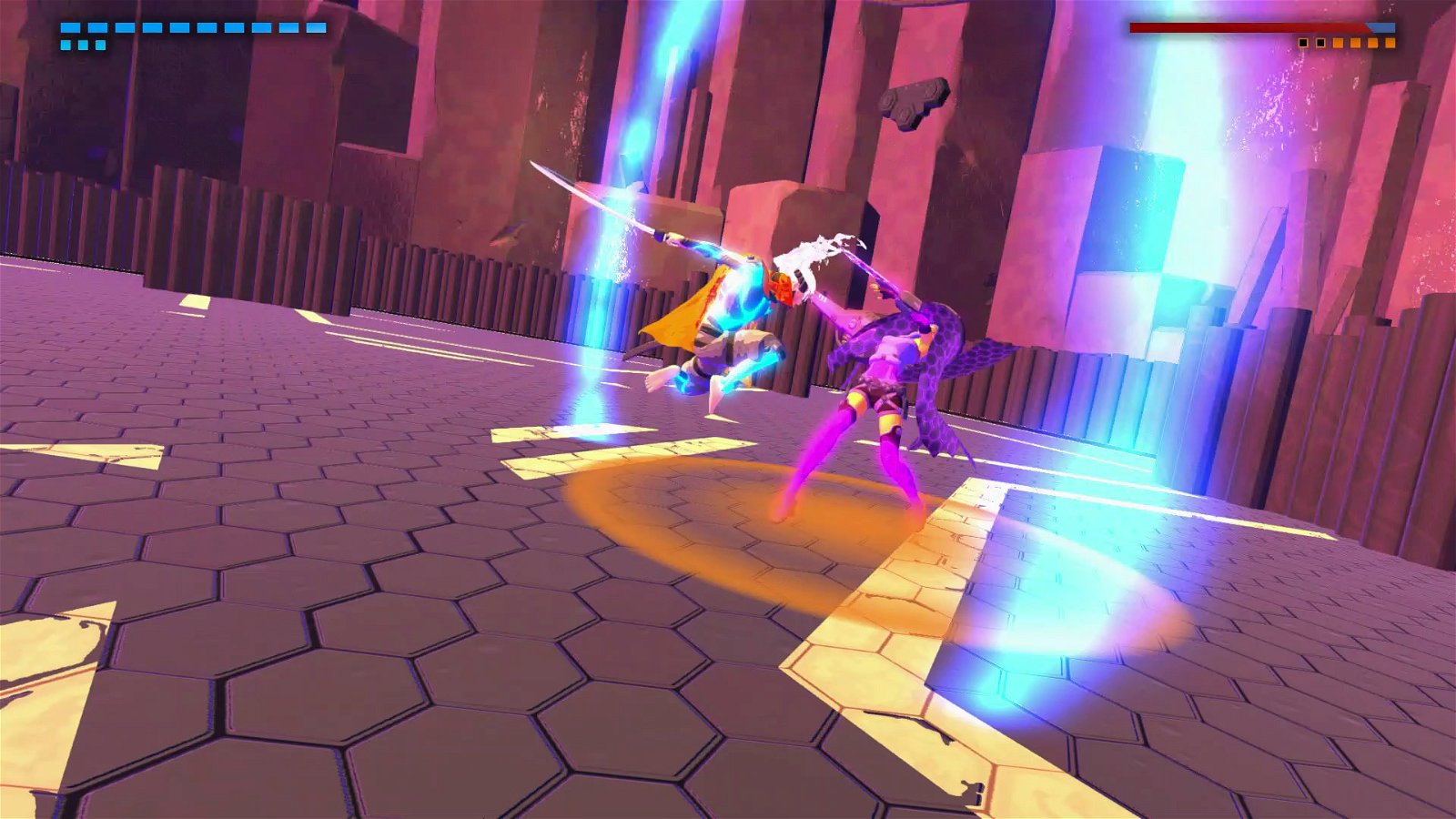 Let me be clear — Furi is tough and unforgiving. Sure it has one concession in that if you lose a “life” (of which you have three) you can start again from the same point, but note that your foe will also recover all of their life too. And while I wouldn’t call them slogs, fights can be brutal and lengthy. I’m talking up to ten minutes of pure dodging and counterattacking with very little in the way of breaks in some of the later areas. If that sounds too taxing, then this game definitely isn’t for you.

In its unrelenting toughness, Furi will really call to a specific type of gamer. Other than a few select phases in two fights in particular (which can be managed), I never felt like the game was being “cheap” — just challenging. In a sea of games that constantly hold your hand and tell you exactly how to complete tasks, Furi is a breath of fresh air, even with its blemishes.

The player, not the game, starts off as a prisoner.

In its unrelenting toughness, Furi will really call to a specific type of gamer.