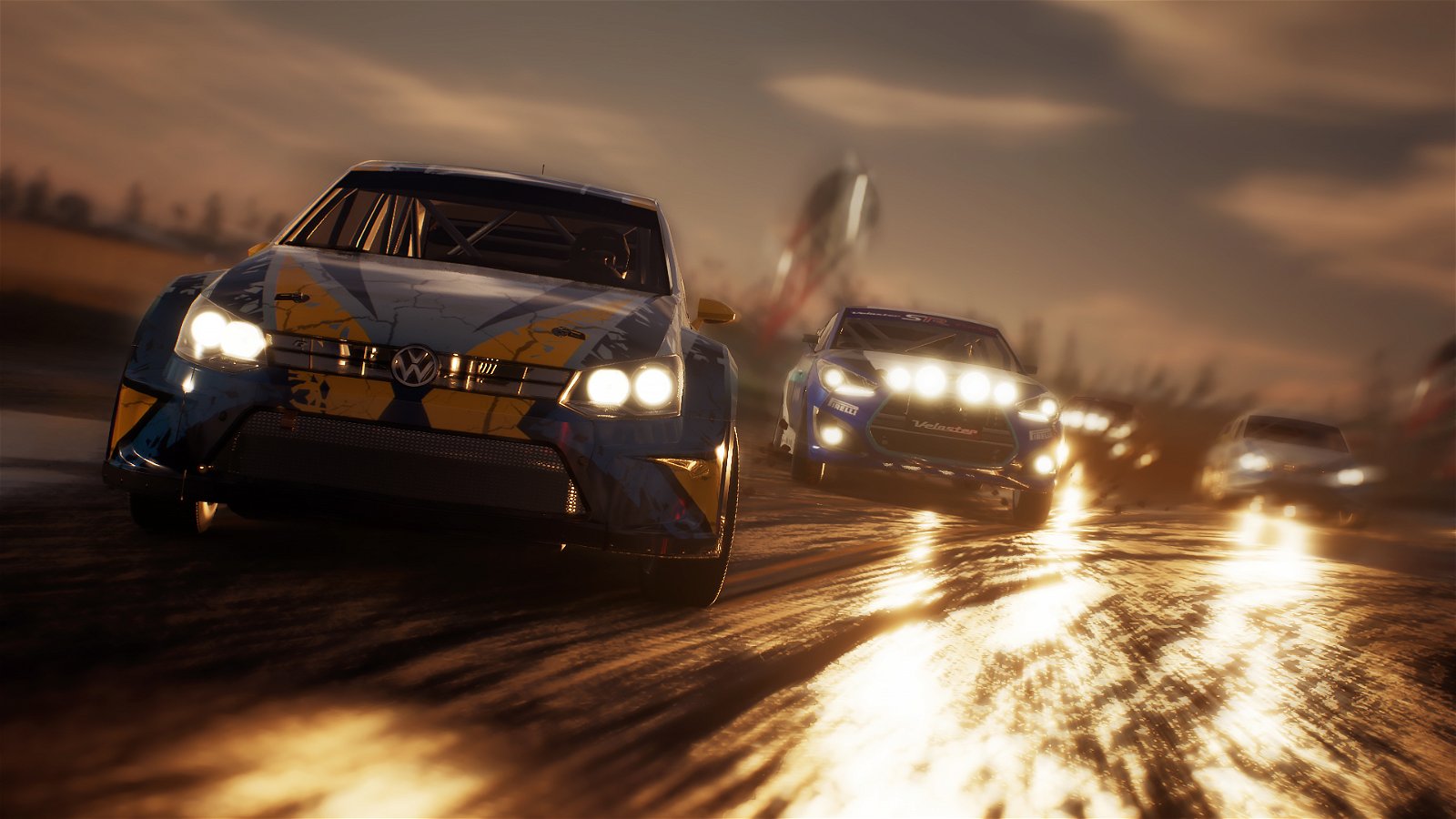 I honestly haven’t played a racing game not titled Mario Kart what seems like forever; which is strange because I remember quite enjoying them as a youth. I have the fondest recollection excellent titles like Burnout, Need For Speed Underground, Test Drive, Auto Modellista, and Blur to name a few. So I got into Gravel hoping to relive those fond memories of speeding down a track not on a road made of rainbows, and without any power-ups to help me out. Sadly, like riding a bus during rush hour traffic, it only left me frustrated and bored.

The hardest thing about reviewing a game like Gravel is it lands in that awkward, hard-to-review territory of mediocrity; neither good enough to gush over nor bad enough to tear apart. While it’s a good enough looking game and there’s certainly enough content in the way of cars and tracks to race them on, it never really brings the WOW factor to hook in both fans or the genre and newcomers alike, especially considering that so much of the content is locked behind the campaign mode.

Gravels’ biggest flaw is in its overall presentation. It began the moment the game loaded up—the game’s title appearing with a wall of towering flames behind each letter, as grungy guitar chords scratched overtop and I realized the 2000’s attempt at edginess was doing nothing for me. But a lot of Gravel feels kind of lazy. There’s an attempt to mimic the FMVs of Need for Speed 2015 for a few specific “Masters” boss characters and they kind of feel thrown in for no reason. Even the attempt to give each race a sort-of live TV feel seems lazy with pre/post-race “announcers” that sound completely phoned in and totally disinterested.

And though I did say there are quite a few cars to choose from in Gravel, it hardly seems worth it since the game provides no statistics for any car. Sure, it tells you the kind of engine it has, or whether is 2WD or 4WD, or what kind of gas it takes, but you’d think in a racing game they’d provide you with basic stat bars to compare acceleration, top speed, handling, or at least something.

The gameplay, while mostly functional, fares from a similar lack of overall polish. Maybe it’s due to the fact that Gravel is an “off-road” racing game, so you’re constantly on racing on dirt roads and in muddy stadiums, but driving always felt slippery and control of the car is limited. I get that perhaps it’s “part of the game,” but to a certain degree, you want to feel in control of your car. Also, physics tend to behave very weirdly in this game. During my time with Gravel when I experienced even the slightest nudge from another car either sending you flipping around; or times when you gently caress another car during a drift and lose all momentum; or my favorite, when I bumped into a wall barrier that was apparently made of rubber and was shot backwards at maximum speed (seriously, check my Twitter, I have proof).

The strangest feature available, although through researching apparently many racing games have implemented this, is the ability to reverse time should you make a mistake within your race. Much like Prince of Persia: Sands of Time, this rewind feature is limited to maybe the last 5-10 seconds, however, there’s no limit to how much you can do it, nor is there any punishment, so the game has virtually no challenge since any mistake you might make can immediately be corrected. There’s no incentive to play a tracks multiple times and learn their nuances. Make a mistake, immediately correct it, and move on.

And that’s exactly what makes Gravel so thoroughly unengaging: an utter lack of challenge. Even in the aforementioned “Master” challenge races, where you race one-on-one with boss characters who are supposed to be a real challenge, never did I feel like I was being tested. When the moment I made even the slightest mistake, I could just rewind a few seconds and not.

While it’s certainly not the worst racing game I’ve ever played, I can’t really recommend it. With a lack of local multiplayer, it’s not even really worth having for some competitive racing with friends. It looks nice and plays fine most of the time, but that’s really all it has going for it. It’s about as generic as the substance it’s named after, and with so many better, more dynamic racing games on the market, you can skip this one.

File Under: PlayStation, racing
A retail version of the game reviewed was provided by the publisher. You can read more about CGMagazine reivew policies here.