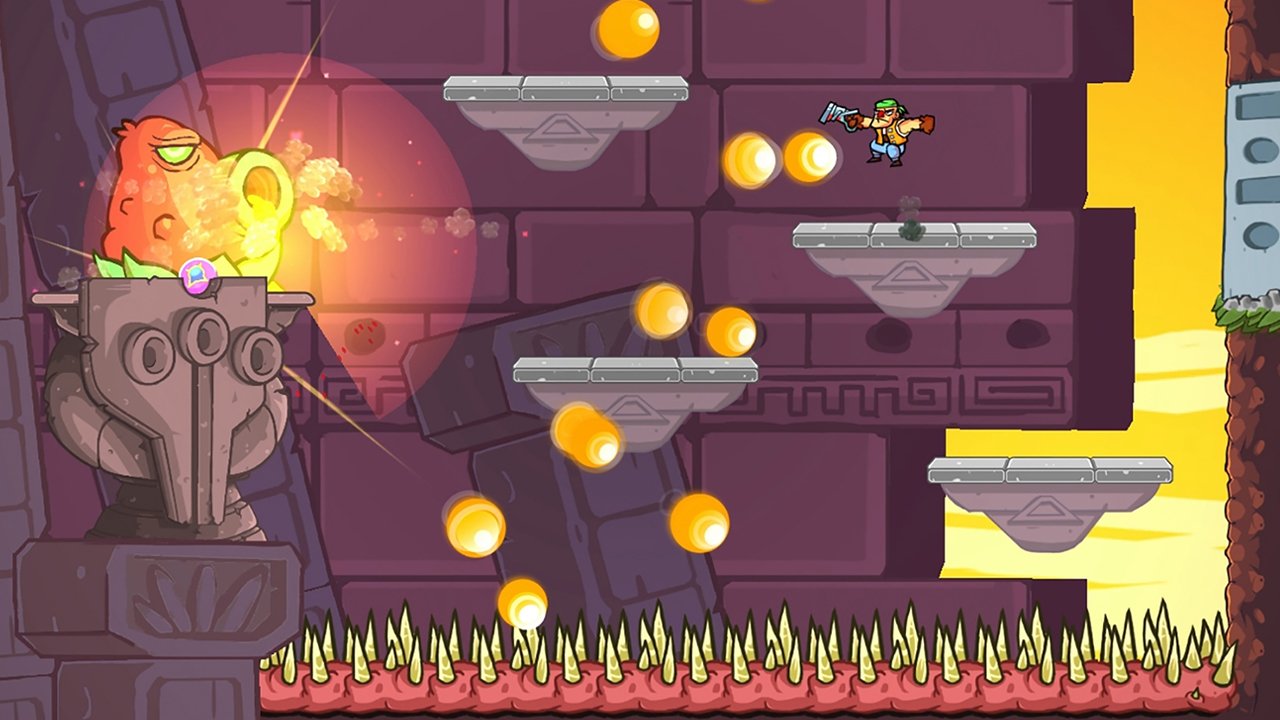 Metroidvanias are all the rage in the indie world these days and rightfully so since Nintendo can’t be bothered to make a proper new Metroid game—aside from a remake. Thankfully, Greedy Guns falls on the spectrum of decent games in the genre, and is one of the only ones to offer two-player couch co-op, but isn’t without its faults.

In Greedy Guns players control one of two characters on a quest to slay large creatures all in the name of earning cold hard cash. You won’t find any heroics here, which is refreshing. So many games star characters whose purposes are noble, but here the driving factor is greed. Oddly enough, nearly every single enemy killed explodes into a shower of blood and coins, which can be picked up and used to purchase a plethora of guns available in shops (once discovered).

There is a nice selection of guns to find that are hidden throughout the game which includes most of the stables of run and gun shooters. There’s a laser, a multishot spread, and even a Contra gun that looks straight out of retro games—in a good way. Only two guns can be equipped at a time, and switching guns means finding a spot—which are numerous—to swap between them.

Unfortunately, there are many sections of the game that are clearly designed with a specific gun in mind, which leads to many deaths and backtracking to equip the needed gun. I can’t even fathom why the developers put in the restriction, instead of just letting you carry your full unlocked arsenal with you; it isn’t like the game takes itself super seriously and requires some kind of explanation for one person carrying ten guns at once.

The characters start with a double jump and learn a dodge roll early on, which makes the player invulnerable. While that is all fine and dandy, I found myself annoyed that a majority of the jumps between platforms in the game required double jumps, meaning hundreds if not thousands of more button presses. Even with that complaint, I found the platforming in the game pretty well executed and satisfying, I just feel the jump could have been extended or made to go double the height depending on how long the button was held.

While most Metroidvanias tend to be dark and grim, Greedy Guns opts for colourful cartoony graphics, which fit the comedic tone of the game perfectly. Typically I don’t love this type of animation style, where most characters sprites simply stretch and pivot instead of being fluid animations—much like many Flash animations—but it works alongside the lighthearted presentation of the game. Even some of the humongous grotesque bosses are cute in their own way, and taking them down is a ton of fun when combined with the catchy chiptune soundtrack.

Overall Greedy Guns took me around four hours to finish, and that was without finding every hidden nook and cranny to get a 100% completion rating. It is a rather short and sweet Metroidvania romp that doesn’t require very much backtracking at all and plays like a combination of Metal Slug and Super Metroid with a presentation reminiscent of Saturday morning cartoons. Plus it has co-op. It’s a fun little game that isn’t perfect and doesn’t reinvent the wheel but it’s one worth playing while we anxiously await a proper new Metroid game.

Liked this article and want to read more like it? Check out Jed’s reviews of Songbringer and Knack 2!

It’s a fun little game that isn't perfect and doesn't reinvent the wheel but it’s one worth playing while we anxiously await a proper new Metroid game.