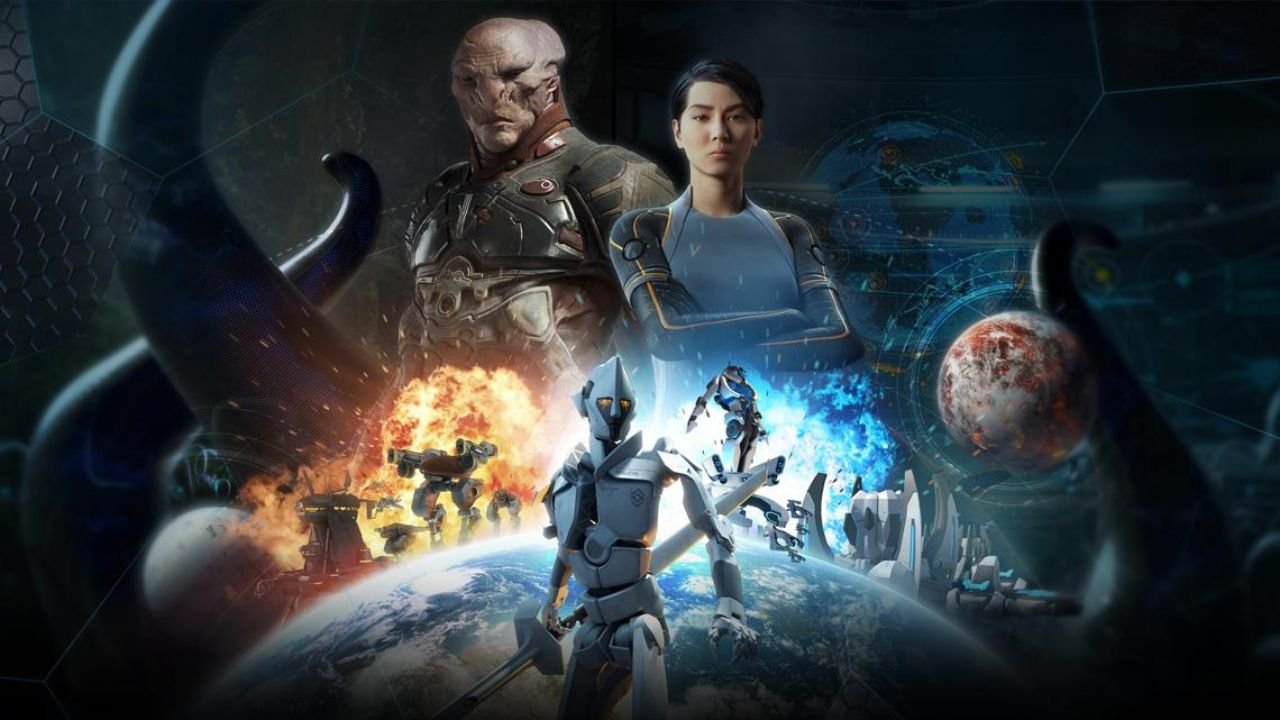 It’s hard to escape the legacy of StarCraft. It defined the real time strategy genre of games, and its popularity remains strong, spawning an entire professional circuit of gamers who dedicate themselves with the gusto of any Olympic athlete. It’s because of this that I feel RTS games need to distinguish themselves from StarCraft more than other genres of games. It’s a good rule in general to not be a clone of an early game (at least until limited game subscriptions exist that delete your game from your hard-drive after six months, which could happen), but when your game has professional athletes who play competitively, you should probably do a bit more to make your game distinctive.

Grey Goo doesn’t quite break away from the StarCraft template of science-fiction RTS games, though it does provide some rather distinct factions at makes an attempt at originality.

The story is fairly basic, and isn’t particularly gripping, with the convergence of three species on an alien world and their conflicts. The factions themselves aren’t distinct – the alien Beta (which is a bit of a derogatory subtext when compared to the human Alphas) are fairly generic weird-looking humanoids, while humans are what you’d expect. The Goo, the nanotech self-replicating machines, are the most distinctive of the races, both in terms of design and power. They actually look quite great, with hexagonal patterns of fluid goo, shaping itself into animal-like combat shapes. The human units are  also quite interesting in their trans-human tech structures.

What becomes an issue, is that in the end, these factions are just filling the three traditional StarCraft roles. The main difference is that they switched the human gritty-tech motif for a Protoss-like sleek high-tech and drones, and gave the aliens the clunky bullet-spewing technology. The Goo, despite several unique mechanics, is just the Zerg in terms of its story role. Not quite as malicious, but it fulfils the same goal. I have to give kudos for making humans the hyper-advanced civilization this time around, but it’s not quite enough to break out.

Each faction’s mechanics are markedly different in terms of building philosophy and strategy. The Beta can build anywhere on the map as long as they build hubs to attached several other buildings, giving them a lot of versatility in terms of base location (you still have a fixed Headquarters you need to defend, though). Humans are more centralized, requiring power conduits stringing from the central core to power buildings, but are the only ones with the ability to build weapon emplacement structures. The Goo has the most unique design – it lacks any structures, using only “Mother Goo” units that feed on resources (“catalyst”) split off into smaller blobs, which can be shaped into other units or left amorphous to feed on enemy units. This mobility has some the best applications in game – you can move your Mother units away if under attack and to keep them out of harm’s way, or even take them along to consume enemy buildings for resources (though they are extremely vulnerable to damage, and their resources and unit ability is tied to their unit health). It’s a blast to take a few Mothers and other units into an enemy, base, feeding on buildings, then split off some other Proteans and shift them into units right in the middle of the fight. While their units lack most defense, they can strike fast, crossing difficult terrain easily with many units, or even waiting on normally-impassible landmarks to bombard from above or ambush over a mountain.

Gameplay is serviceable, and somewhat fun, though it is hampered by unresponsive controls and annoying pathfinding which leads to your troops wandering in the most convoluted way. It plays fine, and it looks fine – the graphics are pretty and consistent. It would be nice, however, if the game would stop violently crashing – several missions will just abruptly show “Connection Lost” even on single-player games. It doesn’t like restarting, sometimes freezing up. Missions in the campaign quickly develop into some tedious situations, involving timed defenses of certain points – the Goo have a series of missions where you have to defend points for five minutes, which goes against their design philosophy. I think this was largely a mistake – the point of the campaign is to teach the player the strengths of the various factions, and the missions where you deal with the weaknesses should be better structured to do it.

All in all ,this game isn’t too bad, but it suffers from a few design issues and crashes that skip up its play. If you want something other than StarCraft, it might be worth the time.

Grey Goo doesn't quite break away from the StarCraft template of science-fiction RTS games, though it does provide some rather distinct factions at makes an attempt at originality.