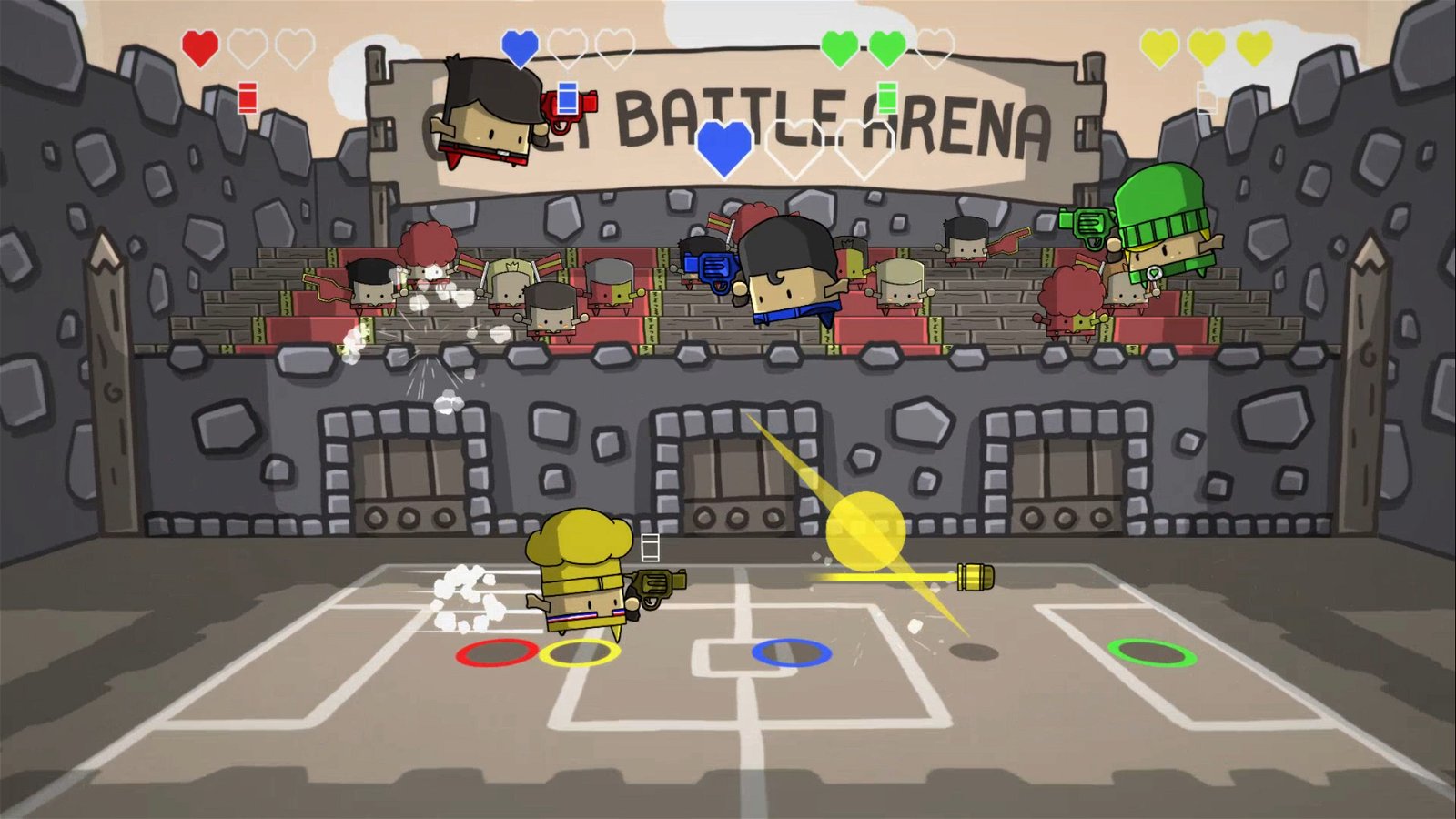 Guilty Battle Arena is a title that tries to be competent, but suffers from a lack of content that holds it back from being something memorable.

The title features a one- to two-player mode in addition to a local co-op mode that supports up to four players. Unfortunately, in essence, both modes feature mostly the same content, with the majority playable in solo sessions, which ultimately makes the game feel lazy and uninspired.

Gameplay consists of the player character being tasked with surviving wave after wave of enemies. In the one- to two-player mode, the player is only given a single bullet or piece of ammo, which after firing must be picked up from the floor. This mechanic can lead to some slightly heated moments in an otherwise tepid and flat romp.

Both two-player and co-op mode feature different permutations of essentially the same thing, with the biggest difference usually boiling down to cosmetic changes. Variants of play include options such as Exploding Cats Factory, Rocket Science, Holy Chickens and Deadly Coliseum. These modes feature reskinned versions of the same enemies with the occasional addition of unique elements such as a target that randomly tracks and attacks the player or bombs that fall from the sky in the guise of chickens.

The meat of the game can be found within the co-op mode, which allows up to four local players to play at once. Gameplay is slightly augmented with modifiers that include options such as Ghost, the ability to bring back dead players, Speed Up, which increases the speed of the match in intervals of ten seconds and Trampoline, a mode in which the floor essentially becomes a trampoline, causing players to jump upon landing.

Aside from modifiers, the co-op mode also features predetermined modes that are exclusive to multiplayer, which aim to spice up the otherwise repetitive gameplay. Unfortunately, none of them really feel that different, as they are just slight variants on the bare bones and sterile gameplay.

Some of the modes within the multiplayer co-op include Last Man Standing (self-explanatory), Capture the Flag, and Hot Potato, a mode which forces the players to shoot to pass while cannons aim at those currently not holding the potato.

The music does an adequate job of setting the mood with its fast and upbeat melodies that make the game feel active and energetic.  Visually, the game looks like a cross between Scribblenauts and Boxboy! borrowing the bright, cartoon-like colour palette of the former and the square box aesthetic of the latter. Regrettably, the square look of the characters and enemies ends up making everything feel too similar and generic.

If there’s one thing Guilty Battle Arena does right, it would have to be the controls, which are precise and tight, making the game always feel fair and void of cheap deaths.

Individual levels within Guilty Battle Arena include a one- to three-star rating, which gives players looking for a challenge a bit of extra wiggle room, especially considering the difficulty curve as rounds carry on.

At the end of the day, Guilty Battle Arena is a mediocre party game that feels like it belongs more on a web-browser than a console. Those looking for a fun, action-oriented party game are better off with titles such as Towerfall: Ascension or Thief Town.

Guilty Battle Arena is a title that loses the fight against other games within the same genre.