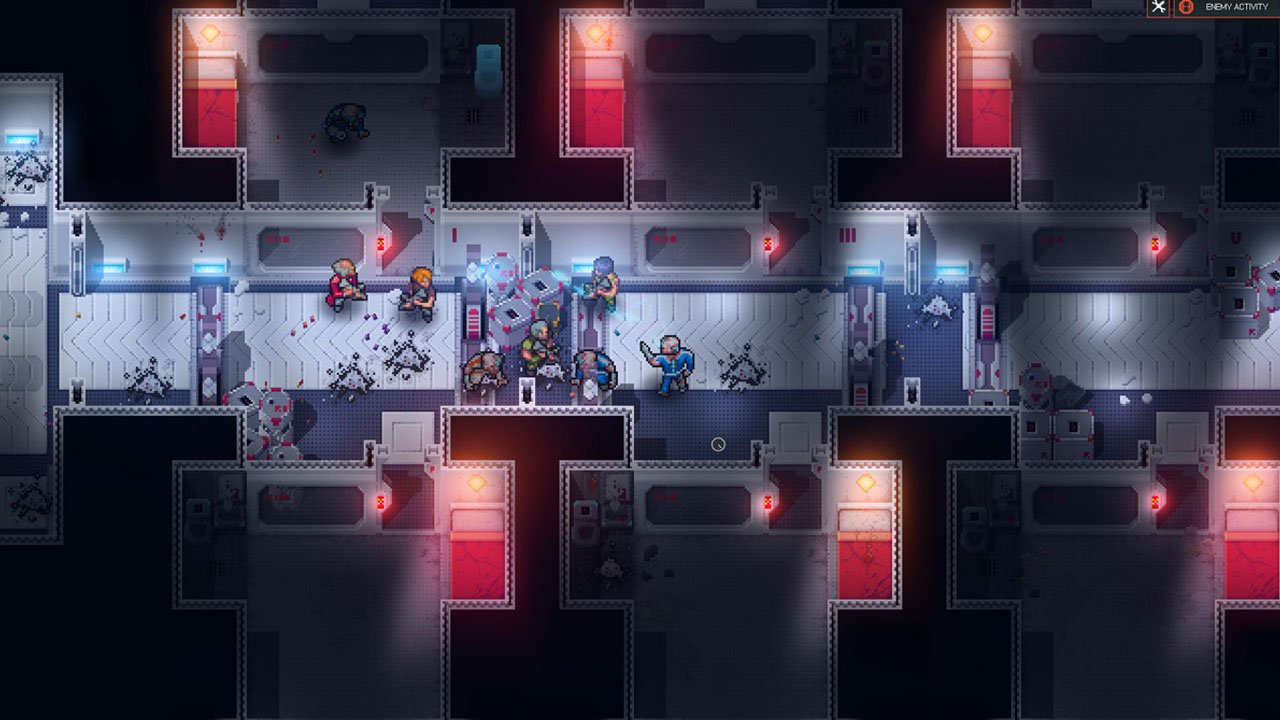 Halfway is the purest sort of love letter. Within minutes of starting it up, it becomes clear that Robotality, the game’s developer, is an enormous fan of a few things: well-crafted pixel art, 1980s science fiction movies, and XCOM. Normally it wouldn’t feel right to make these comparisons straightaway, but, in this case, it seems like the most accurate way to describe what Halfway is.

As soon as the main menu splashes across the screen, Robotality’s influences take centre stage. A spaceship interior is shown, its gleaming floors and shadowy corners as lovingly rendered as the 16-bit era games its designers have obviously drawn inspiration from. Warm synthesizers fade in while the player starts the game and is introduced to Halfway’s story. A lone soldier named Lannis wakes up on the deep space vessel Goliath and discovers that, following a faster than light jump, most of ship’s population has turned into vicious mutants. After a brief intro to the game’s turn-based combat mechanics, Lannis gets to work rescuing surviving members of Goliath’s crew. These characters—a morally questionable scientist, genetically engineered super soldier, cigar-chomping sniper, computer hacking whiz-kid, and a selection of other 80s action movie archetypes—band together to figure out what is causing the mutations by fighting their way through Goliath’s ruined interior. The characters aren’t very well written (their dialogue is consistently awkward though functional) and the plot itself is pretty boilerplate sci-fi pulp, but the narrative is still compelling enough to drive the player forward throughout the game.

Each mission that progress the storyline is clearly modelled on the squad-based tactics gameplay of the XCOM series. Players have to defeat enemies by carefully positioning their characters behind cover (which is represented by the same half and full shield icons used in XCOM: Enemy Unknown), taking opportune shots where the likelihood of a successful hit is governed by a percentage metre, and managing ammunition and health supplies. The over familiarity of these mechanics is only slightly mitigated by Halfway’s use of unique character skills. While the tactical play on offer is extremely similar to the game it’s based on, a bit of variety is introduced through these moves. One team member can destroy enemy shields, for example, while another is capable of refilling her health whenever the special skill has recharged from previous use.

Aside from the novelty of this system, though, Halfway’s gameplay falls short of the series it so readily invites comparison to. The main problem, unfortunately, is that combat isn’t balanced well enough to encourage more than a few tactical options. Sniper rifles—one of the few weapon classes that can be looted from the crates and lockers found within each level—allow soldiers to easily hide behind cover, inflict a lot of damage, and funnel enemies through the chokepoints located within maps. Despite my having initially creating a team where different characters were best at mid- and short-range combat, partway through the game it became pretty obvious that the clearest path to success was to use the same tactics again and again. Soon after this realization a definite sense of repetition set in that was only amplified by Halfway’s steadily increasing difficulty. The gruelling last missions of the game only amplify the need for careful tactical play and, after discovering the outsized efficacy of a team made up entirely of snipers, there’s no space to continue experimenting with different play styles.[youtube url=”https://www.youtube.com/IKXxA382xPs” width=”400″ height=”200″ responsive=”no”]
But, even while the gameplay suffers from these issues, Halfway’s visuals and soundtrack are continually impressive. There may not be enough variety in the monster design, sure, but Robotality has still done an exceptional job of providing environmental design and music that creates the eerie, retro-futurist atmosphere it aims for. The waves of Carpenter-esque synthesizers perfectly match the intricately detailed pixel art that make up the Goliath’s dilapidated hallways, star-filled windows, and command centres strewn with bullet casings.

Robotality has obviously put a lot of heart into developing Halfway, and it’s this sense of genuine passion for the game’s subject matter that serves as its greatest strength. Despite the problems in gameplay balance that plague the latter stages of the campaign, the enthusiasm that must have fuelled Halfway’s creation consistently shines through. This, more than anything else, helps to make a fairly derivative and often flawed experience far more enjoyable than it perhaps should be.

Aside from the novelty of this system, though, Halfway’s gameplay falls short of the series it so readily invites comparison to.