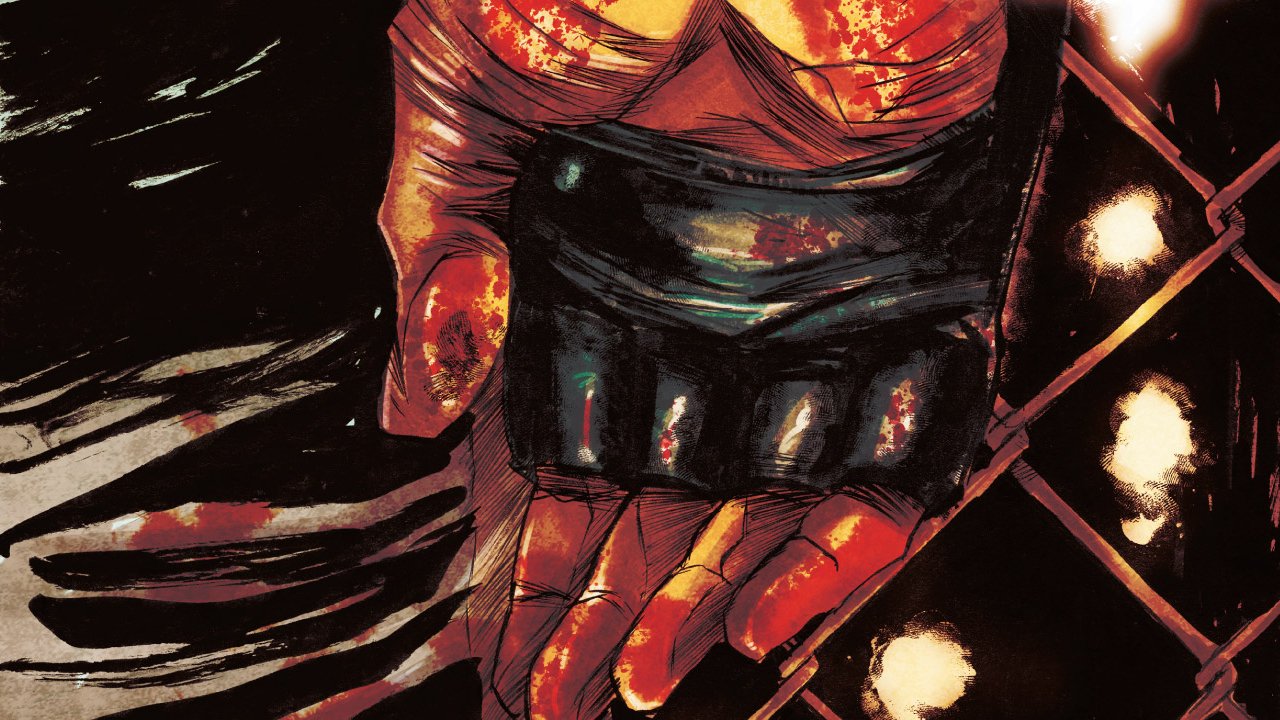 Heart is a very different comic from most others on the shelves, but it’s definitely one worth picking and giving a read.  This trade collects the four issue mini-series in its entirety, and is a gritty, black and white story of a young MMA fighter in Kansas City.  Blair Butler is a name I haven’t seen before on any comics, but after reading this remarkably powerful series, I hope that I see her name on something else soon, because I’ll definitely give it a try.

Heart follows a young man in Kansas City who finds himself with little prospects in life, and just kind of drifting through aimlessly, at an entry level job, which he gets after dropping out of college.  But after going to an amateur MMA fight to see his brother fight, his life is forever changed, as he decides that MMA will fill that missing void in his life, and he attacks the sport with a ferocious determination to succeed, to rise to the top, and make his new dreams come true.  Butler makes “Rooster”, the protagonist, extremely likeable, as it’s easy to see where he’s coming from, as he tries to succeed at MMA.  The feeling of being lost in life, adrift, is a fairly universal one, as almost everyone feels a little lost at some point in their lives, and as a result this story feels incredibly real and genuine.  What keeps it grounded in reality is that Butler doesn’t go easy on her protagonist and his dreams, instead putting him through the wringer, to make the character realize some hard truths about himself and his life, forcing him to make some even harder decisions.  The ending is a sombre yet happy one, as the story acts as a morality tale about doing the best with what you’ve got, and making sure to take every shot you can, even the long shots, as long as you recognize when it’s time to walk away.  The book is pretty well focused on the protagonist, but the supporting cast does play an important role, as they help “Rooster” both realize who and what he wants to be, and then also play as a cautionary tale later on in the story, once “Rooster” has made certain realizations.

Mellon’s artwork is uniquely suited to this script, as it’s rough and stripped-down, making it quiet appropriate for the subject matter.  That being said, at times the artwork is almost a bit TOO rough and gritty, as the details on the various characters could have been a bit more precise, so that it was easier to distinguish who certain characters were, particularly during some of the fight sequences.  The action definitely came off as brutal though, as the punches and kicks were more graphic, and rightly so, than those typically seen in superhero slugfests.

This is an excellent book, one which feels like a very genuine and sincere look at the world of MMA from an amateur standpoint, and how in the case of the protagonist it forever changed one man’s life, ultimately for the better.  There are some great lessons to be had in this book, and yet it’s not heavy-handed, as you become totally engrossed in the life story of Oren “Rooster” Redmond.  I can’t wait to check out more of Butler’s work, based on her fantastic writing here. HIGHLY RECOMMENDED!

Heart is an excellent book, one which feels like a very genuine and sincere look at the world of MMA from an amateur standpoint.