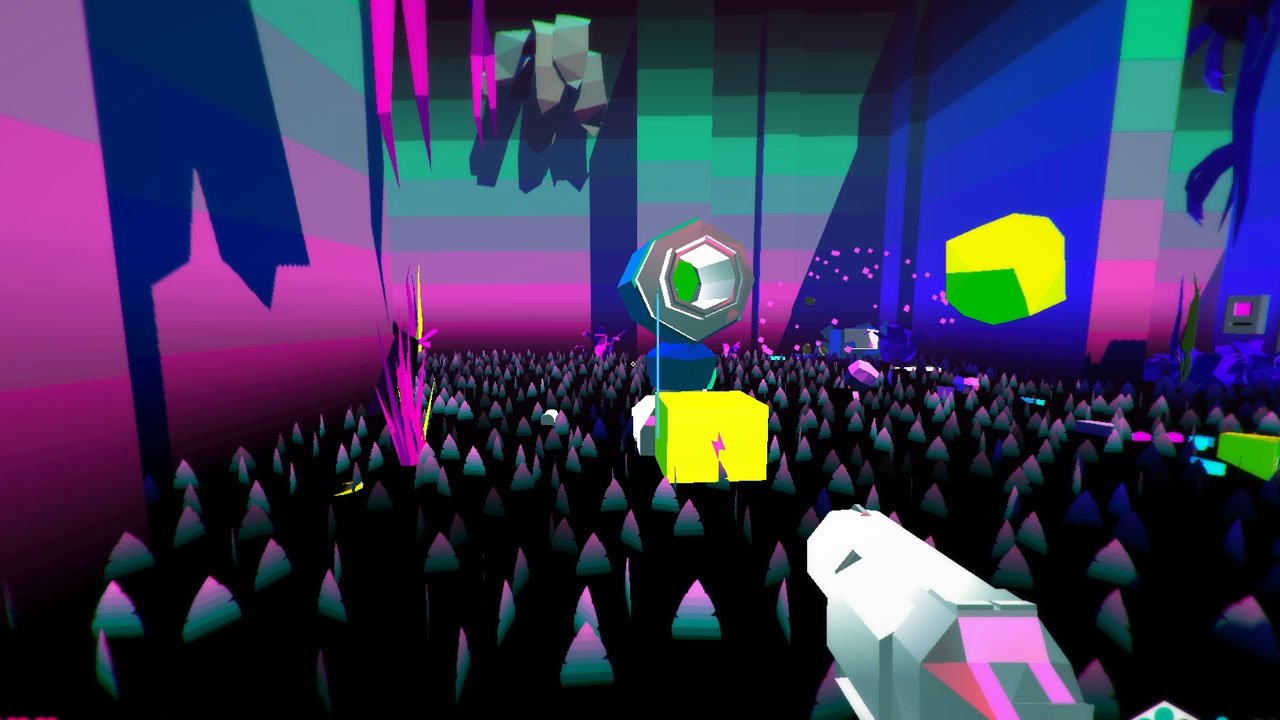 The strength of Heavy Bullets is found in its simplicity. Really, it’s nothing more than a shooter in its most basic form; a pistol resides in the middle of the screen, enemies approach you with vicious speed and intent, various items offer rewards for several situations, and the end goal is to reach the exit door at the end of the level.

But its distilled nature is exactly what makes Heavy Bullets so compelling. It doesn’t need endless amounts of customizable machine guns. It doesn’t need foul-mouthed characters shouting directions to you over the din of battle. All it needs is to arm you with the basic necessities, relay the rules, and turn you loose. And it does this extremely well.

Heavy Bullets is all about combat. As an expendable janitor, you’re sent into a private corporate hunting ground where the security systems have gone haywire and are now turning on the facility patrons. For $5000, your job is to wade through plant-laden corridors, firing bullets at hostiles and shutting down everything to ensure the safety of everyone in the building.

Like the name Heavy Bullets implies, ammunition is of great value. Rather than walking over boxes of ammo and accruing hundreds of rounds to fire off at will, pick-ups are limited to one bullet. Yes, one.

Armed with a six-shooter, the player has to manually reload every individual bullet in the gun as they go, causing one’s eyes to constantly glance at the bottom screen to check that the magazine hasn’t gone dry and keep tabs on a limited health bar. Thus, it becomes a game all about extreme resource management.

Firing bullets that only come in limited quantities already demands a great deal of accuracy, and this is only made worse thanks to Heavy Bullet’s insistence on being a frantically-paced game in which precision shooting is key. From a slow, calculated approach to hurriedly backtracking, varied enemy types require different tactics, and its frenetic energy is enough to cause one to unknowingly grind their teeth with anxious energy while avoiding attacks and lining up the perfect shot.

And that’s what makes Heavy Bullets great. It takes many cues from the classic shooters of old, cutting out the more superfluous mechanics and flourishes of today’s shooters and instead focusing on brutal combat. Roguelike elements strip a player of all progress and send them to the start after death, and a wide range of items with varied abilities allow the player to feel just powerful enough to succeed in a level where virtually everything is pitted against them.
Looking a lot like a neon-ridden psychedelic fever dream, Heavy Bullets’ visceral and extremely satisfying shooting owes a lot to its creative art design. When hit, enemies burst into thick, brilliant pieces, littering the floor with money, ammunition pick-ups, and blocky remains. Enemy design and coloring plays a large role in their functions, and the game is even cruel enough to occasionally use camouflaged enemies to give pause to the player’s individual steps.

Heavy Bullets is the rare kind of difficult that inspires one to continue to inflict pain on themselves in order to improve upon their last run. It’s fast, precise, and well-designed, never allowing one to grow tired of its mechanics and arming the player with just enough to give them the edge they need while still reminding them of their mortality. It’s brutal, it’s tight, and it’s nothing less than pure shooting bliss.

Heavy Bullets is the rare kind of difficult that inspires one to continue to inflict pain on themselves in order to improve upon their last run.