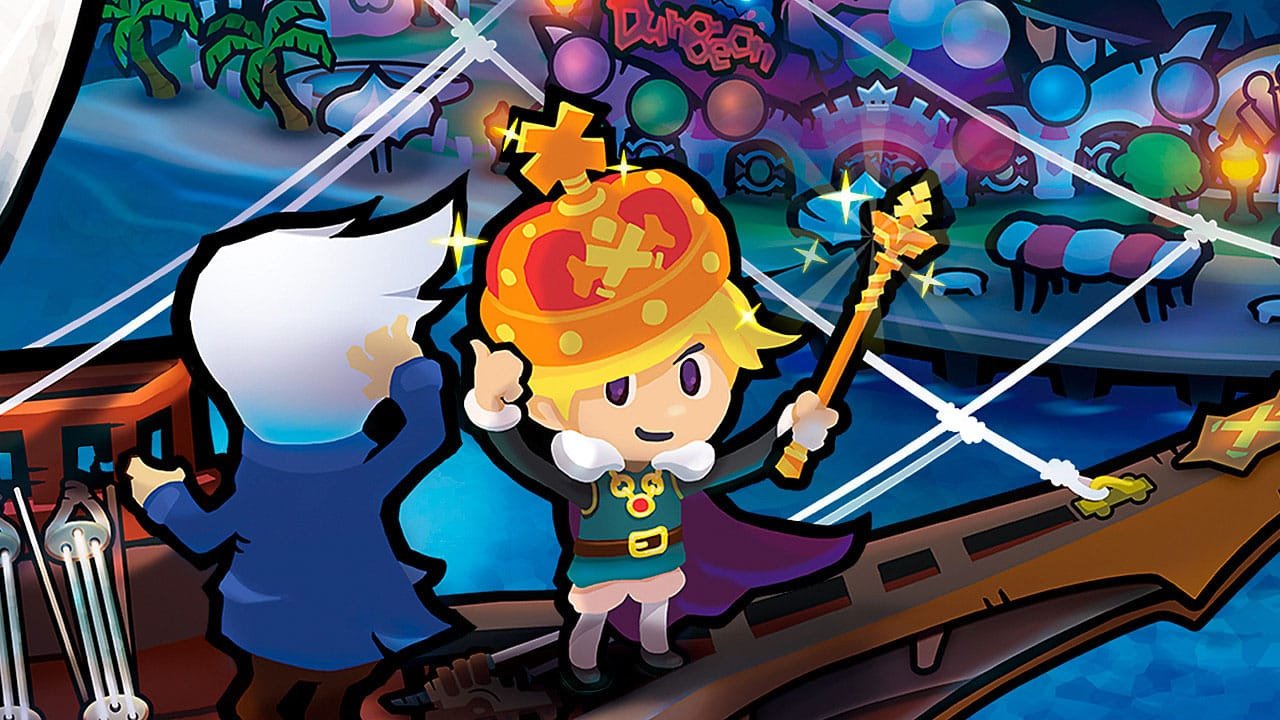 From the very beginning, I knew Heroland was going to different from my usual JRPG experiences. Having only seen a few screenshots of the game while it was being developed in Japan however, I had no idea just how different that experience would be. Taking a more hands-off approach towards classic JRPG battles, Heroland transforms what would be a standard homage to early titles in the genre into a comical hero managing simulator.

Developed by Furyu Corporation and several former members of the Earthbound sequel, Mother 3, Heroland is an RPG that takes place in a Disneylandesque amusement park of the same name. Heroland serves as a place where guests can live out their dreams as fantasy world heroes on a quest to defeat the dark lord. Rather than playing as a Heroland guest however, players assume the role of the amusement park’s newest employee, a tour guide ironically (and forcibly) named Lucky. Right from the start, Heroland throws itself completely into its amusement park setting, creating plenty of opportunities for hilarious dialogue exchanges alongside some original ways to parody RPGs. Keeping its narrative relatively light, telling episodic adventures as new guests arrive at Heroland for their own varied purposes from trying to defeat the faux demon lord for fame in order to regain royal status to simply being a big fan of fantasy roleplay.

Fans of Mother 3 will likely recognize the familiar character designs found in Heroland. Heroland takes 2D character sprites and moves them about as though they were floppy paper cut-outs. While this style stands out and makes for some great slapstick comedy, it does come with a few disappointing limitations. Although the sprites themselves look great, there are a limited number of animations for each character, something especially apparent during battles. Another downside is it limits the amount of physical interactions characters can have with each other or the environments which are often empty as a result. Heroland opts out of voice acting entirely, instead using retro RPG text sound effects, some of which can be a slightly grating on the ears.

As a tour guide, the player’s job isn’t to fight monsters, but to guide guests on tours through the park’s many dungeons while offering limited assistance in battles. The touring segment themselves are very simple. Players progress along panels of a map layout of the dungeon with panel hosting either a battle, story event, or shop. I mentioned at the start of this review that Heroland takes a more hands-off approach towards battles. Taking place in real-time, party members will plan and execute their own attacks while enemies do the same. While he doesn’t do any fighting, Lucky has an assist gauge that fills over time. When full, players can either provide helpful instruction for the entire party, an individual party member or use a single item. At first, this results in a lot of waiting as you watch the AI battle it out in front of you, but as the enemies become more difficult, player input becomes more necessary to make it through the dungeon’s many battles.

Heroland’s unique battle system makes dungeon tours less about learning the ins and outs of battle and more about preparing your heroes to fight most effectively on their own Outside of tours, players can visit the staff room where their monster cosplaying co-workers will give them a couple of hints about upcoming strategies they’ll be using during the next tour along with likely loot drops. From there, players can equip their guests with stronger weapons that inflict status ailments or have elemental attributes. Mechanics like this helped bring back some strategy to what would otherwise be a mostly random, luck-based RPG. Additionally, players are free to repeat cleared tours for extra experience points as well as go on character-specific sidequests which will boost that guest’s abilities.

Keeping true to its amusement park theme, simply completing tours is only a part of the goal in Heroland. An equally important stat to keep track of guest’s satisfaction levels. Different actions taken during battles can affect a guest’s enjoyment of the tour they’re on. Things, like being healed or defeating an enemy, will raise their satisfaction while negative actions like dying can dramatically decrease it. Like many of Heroland’s mechanics, this might seem completely random at first, but as you become more familiar with your party members’ skills and personality traits, it becomes a lot easier to manipulate the outcome. On top of that, any loot dropped after a battle can be given to party members, potentially raising their satisfaction. Although there’s no real penalty for completing a dungeon with your guests feeling miserable, Heroland does offer multiple rewards as an incentive to aim for the best ratings. After finishing a tour, your guests will gain experience points. Afterwards, their final satisfaction rating will be transformed into experience points for Lucky, potentially levelling up the player and unlocking small perks such as being able to carry more items. It also earns Lucky bonus pay for items in the park. Guests will also get a boost in their relationship with Lucky, eventually unlocking that character’s side quests.

Heroland has all the makings of a great and original title, but despite the fun I was having a great time, I couldn’t help but feel as though something was missing. For as unique and finetuned the game’s battle system and mechanics are, with no real exploration, there isn’t much to do outside of battles. Even certain features, such as the ability to collect furniture and customize Lucky’s room, seem to serve absolutely no purpose and add nothing to the game. Still, Heroland is a worthy addition for any JRPG fan looking to try something different.

While it lacks in variety, Heroland serves up an original idea that is almost sure to give RPG fans a laugh along with a taste of something new, yet familiar