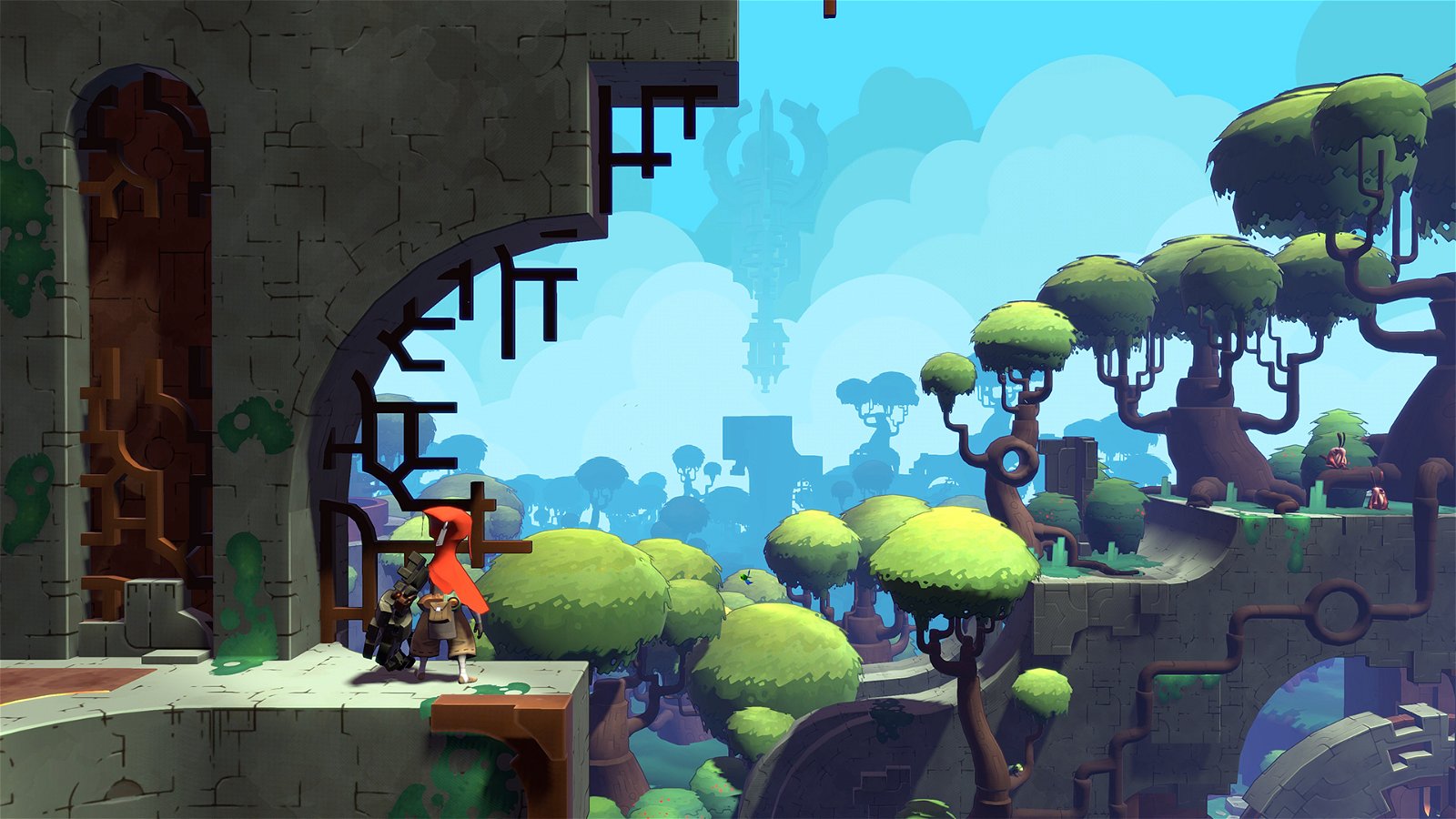 Runic Games has created something completely different in Hob than its previous games, the well-received Diablo-like Torchlight series. Hob is a Zelda-like adventure set in a beautiful shape-shifting overworld filled with tons of wildlife to see (and pet!), and a lot of platforming.

Also, I think it is one of the most boring games I’ve played all year.

I spent the better half of an hour trying to suss out what exactly my goals were at the start of the game, as it gives you little to no indication of what to do. Sure, there is a stone golem/robot who beckons you along at first and then simply points in a direction, but from there you are on your own. If only it were so simple to just go left and figure out where to go. Eventually, I stumbled on the correct path, got granted a power that let me punch through certain walls (bombs anyone?) and continued on my way.

The way in which the world is laid out doesn’t exactly help the player figure out where to go. There is little to no ‘signposting’ aside from an overworld map with a goal point on it; getting to said point isn’t always a linear affair thanks to one-way doors and the multi-levelled world that requires lots of platforming.

When not trying to figure out how to get to the next point of interest, players will be platforming with controls that feel a bit stiff, as if every jump between platforms almost magnets your character to a set path and you’ll make it so long as you’re holding the run button. As I played with an Xbox One controller, the run button is mapped to the right trigger, which meant holding the button basically my entire playthrough. Simply making run a triggered state or making the character run based on how far the control stick is tilted would have been better.

Not only is the platforming clunky and tedious but so is the combat. The main character has an over-sized stone fist and a sword to swing. For the most part, the fist is used to navigate the levels (basically taking the place of items core to the Zelda series) thus leaving your sword to do most of the damage. Hob suffers from the same ‘stand around and wait for an opening’ combat that many of the Zelda games have. Players will be staring at enemies waiting for the right moment to dodge to allow them to get a few swings in before starting the process over and over again. It is tedious and not at all fun to the point where I found myself running past basically every enemy except for the few times the game requires clearing a room before moving on (the game provides no indication that you must do this).

While the world of Hob is pretty, filled with wildlife and moving sections that slide into place like mountainous puzzles pieces, it somehow ends up feeling lifeless. There is no dialogue in Hob, the main character doesn’t even really have any emotions or reactions, and the only real driving force in the game is cleaning the world of this gross purple ooze that is everywhere and that mutates creatures into violent monsters. Within the first few minutes of Hob you have basically been shown everything the game has to offer: a barely-there story, dull combat, and repetitive environments with the same trees and bushes over and over. To top it all off, the game’s soundtrack rarely ever makes itself known, as most of the time there’s only ambient wind or wildlife sounds.

All of this combined makes Hob a horrendously dull and mostly unoriginal game with an impressive transforming world that I wish could have enjoyed exploring for the ten hours it took me to finish it.

Liked this article and want to read more like it? Check out Jed’s take on Marvel vs. Capcom: Infinity and A Robot Named Fight!

Hob is a beautiful but unoriginal Zelda-like that lacks an interesting story and has mind-numbingly dull combat and exploration.