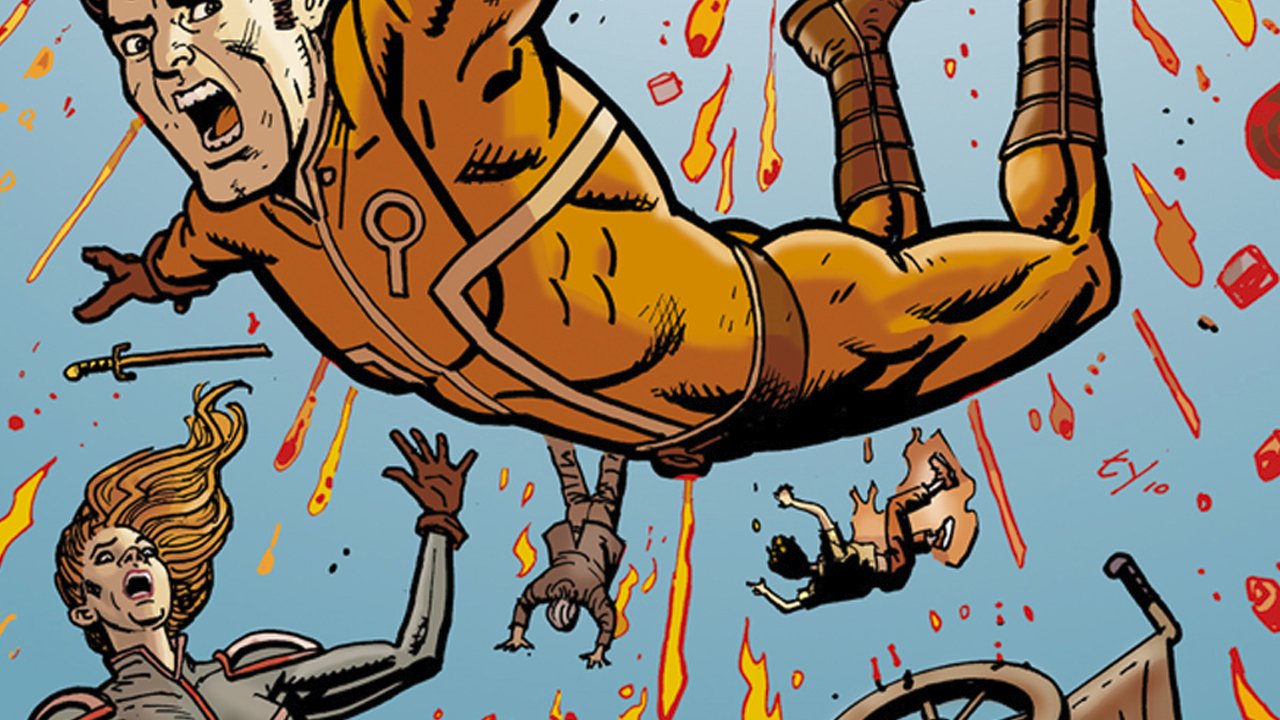 Holmes Incorporated is a fascinating beast. Created by celebrated comic book guy Ty Templeton, and running at a hefty 52 pages, this first issue is the culmination of work from the Toronto Cartoonists Workshop. The graduates of Templeton’s Comic Book Bootcamp were given four months to write, draw, ink and letter stories and Holmes Inc. is the final result. For many of the contributors, this is the first bit of cartooning that has ever appeared in print. While a little rough around the edges and clearly the work of students rather than grizzled professionals, the work in Issue #1 is impressive in its breadth and promises greater things in the future of those involved.

Holmes Incorporated is a spy agency formed from the descendants of Inspector Sherlock Holmes, originally created by Arthur Conan Doyle but now free for others to experiment with due to open license. The elderly Edgar Holmes, a secret grandson of Sherlock, is the sharp-minded and wheelchair-borne Professor X equivalent for this team of blood-bound detectives. The rest of the cast includes Edgar’s son Sherlock the Second, his son Edgar the Second, requisite smart babe Elizabeth Watson, and a ninja-girl type curiously named Sherlock the Third, or Trey.

Holmes Inc.’s first issue includes eight stories, plus a biographical sketch written in the voice of Trey Holmes, drawn and written by TCW graduates. Templeton’s guiding hand is clearly seen throughout the stories with all of the characters remaining mostly consistent through all of the plots, but it’s clear that everyone involved was allowed to let their personal creative juices flow.

In the first episode, “Welcome to Holmes Incorporated,” 18-year-old distant relative or Arthur “Artie” Holmes infiltrates the agency during a public tour of the Sherlock Holmes Museum. It sets up the characters well enough for the rest of the volume, and adds Artie to the team as the young upstart kid with the smart mouth. Christopher Yao’s art is some of the best in the issue, especially the profile of everyone at the end, where Edgar the First accepts an ecstatic Artie into the agency to the clear dismay of everyone else.

In “Night Clubbing,” Trey investigates the murder of an MMA fighter while navigating the advances of some dude named Ryan. Kathleen Gallagher’s writing is mostly excellent, and Eden Bachelor’s art is solid, although the pencil shading harkens a bit too much to university journals.

In “Peril in Paris,” Elizabeth and Artie try to solve one of the original Sherlock’s unsolved cases. Mike Marano contributes the wordiest story of the collection, but uses it to good effect, navigating the investigations of both the present and past Holmes troupes. Next, “Flight Plan” takes a Saturday morning cartoon approach, drawn by Gibson Quarter and inked by Templeton himself. Rob Pincombe’s writing keeps the momentum going with his script, forgoing excessive exposition for some satisfying action.

“Spring Loaded” is one of the weaker efforts, although nods have to be given to Maddy Beaupre for tackling the “don’t do drugs, kids” angle that many a comic reader in his or her late 20s will remember with chagrin. “The Bobby Bomber” gives Edgar I the spotlight as he follows the path of a car bomber, while “The Fingerless Prince” impresses with its approach to themes like self-sacrifice and loyalty in a scant seven pages.

“The International Incident” rounds off the stories with a simple two-page comedy piece, written and drawn entirely by one student, Pierce Desrochers O’Sullivan. It’s a nice end piece to the collection, although it depends on some as-yet-implausible digital trickery on the part of Artie.

Though Holmes Inc.’s first issue is a collaboration of many people’s talents, it’s clear that they all came from the same place – in its strengths as well as its weaknesses. While the perspective, geometry and panel arrangement are consistently impressive, be prepared for a few awkward poses and googly-eyed individuals throughout. It might befit the descendant clan of Inspector Holmes, but the characters’ exposition of their clue analysis usually goes on a bit too long than it should. Thanks to K.T. Smith, who lettered most of the collection, everything is at least easy to read and alternative fonts are restrained but effective when used.

And then there’s the easy characterization of the team as a fledgling X-Men equivalent (they’ve even got their own stealth jet), but this is something that would likely take several more issues to flesh out the characters’ back stories, so I won’t begrudge them too harshly.

When you consider the nature of Holmes Incorporated, the end product cannot help but impress. In a very short time the Toronto Cartoonists Workshop graduates have turned Templeton’s character sketches into more than a half-dozen stories worth reading, and introduced readers to more than twice that in names that are worth looking out for in the near future. 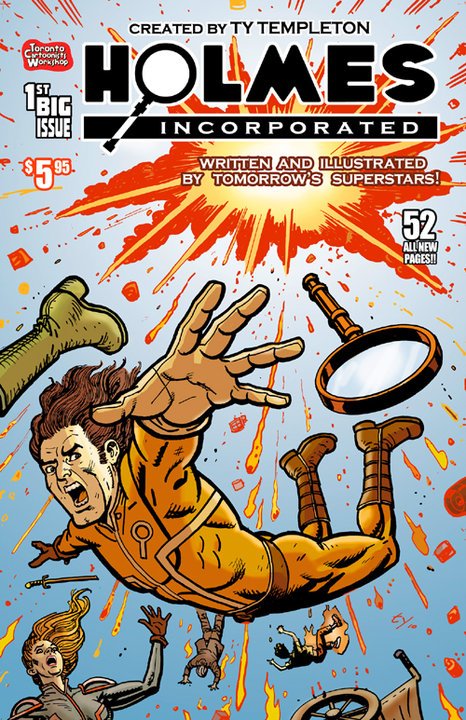