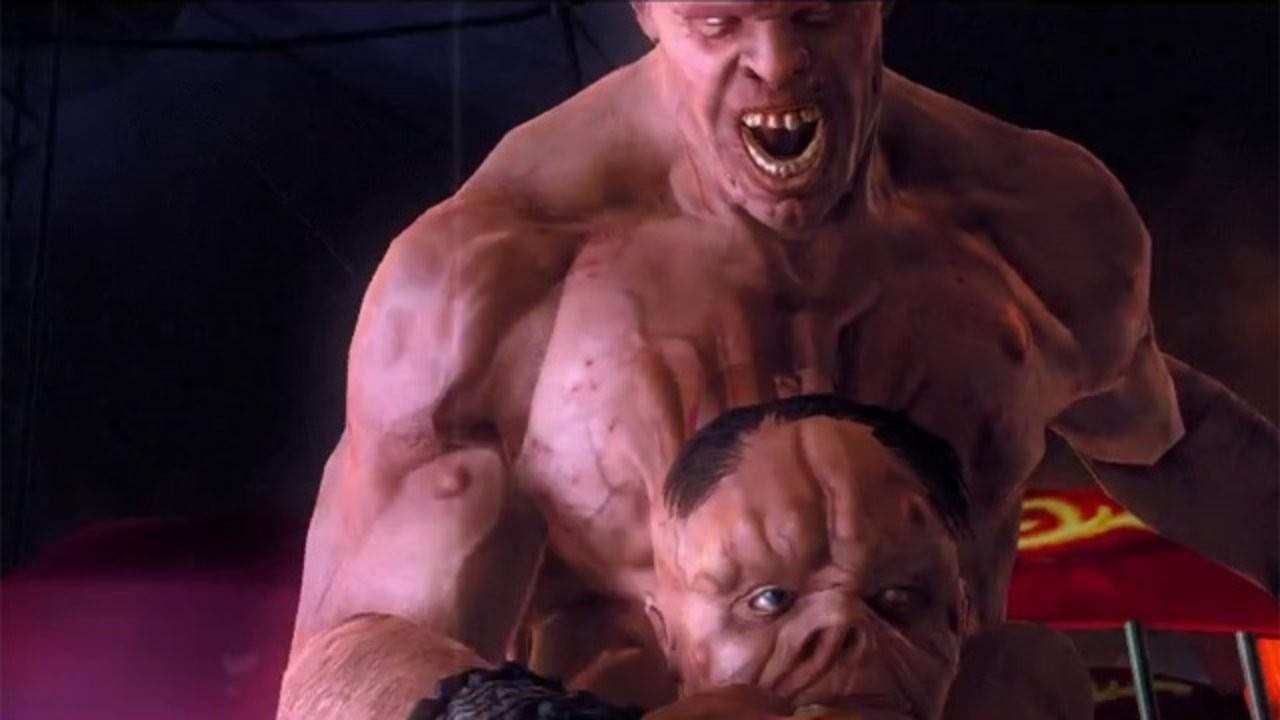 House of the Dead: Overkill debuted on Wii back in February of 2009, and was promoted as a companion game to the Wii Zapper. At that time it was hailed one of the funniest, most over the top and mechanically proficient light gun/on-rails shooters for the console. The experience was marred somewhat by significant technical issues like the frame rate that dropped noticeably whenever the Wii had trouble keeping up with the action. Now, a little over two years later, it’s back, on the PS3 with Move compatibility, upgraded HD graphics and some new levels. What does this mean for the game? The short version is, if you like the game, this just became the definitive version to get.

Chronologically, the game is a prequel to the previous House of the Dead games, and also the first in the series to be made just for consoles. It’s a grindhouse tale of a cop and an agent gunning after the mysterious Papa Caesar who has stumbled on a zombification compound and is quite liberal about using it. The story has an obvious and zealous love affair with the Rodriguez/Tarantino collaboration Grindhouse, similar to the more recent game Shadows of the Damned. However, where EA’s 3rd person action game got some of the aesthetics right, but missed the heart of the grindhouse genre, House of the Dead gets it, guts it, puts it on a stick and drives around the neighbourhood using said stick to knock mailboxes off their posts. It’s a ridiculous tale that can’t go for more than a minute without dropping an emphatic, hilariously inappropriate f-bomb. It is gory, sexist, nonsensical, nihilistic and entirely conscious of what it is doing, making it a gaming gem for those that appreciate bent, dark comedy. The story is puerile and basically disposable, but acts as the vehicle to deliver the game’s demented charm and personality.

First let’s go over the obvious changes. On the presentation side, there’s been a noticeable jump in visuals from the Wii to the PS3, which is expected. Textures are at a higher resolution, and over all the game looks sharper, more detailed and better looking, although it’s all layered behind a deliberate filter of film grain and scratches. Another happy and expected side-effect of the console migration is that the performance issues that made the Wii chug are non-existent on the PS3. The frame-rate is always smooth, an incredibly important factor for a shooter to have. This is the best and smoothest that the game has ever been, and it’s now been bolstered by the addition of 3D so that the cheese now has an added sense of depth. The sound is largely the same with some stylish tunes that run the gamut from jazz to 70s inspired beats. The dialog—including the new chapters—maintains a certain kind of smart stupidity that makes it perfectly clear the writers know how ridiculous this story is and are just going with it. The new chapters also reinforce the f-bomb ratio, likely helping Overkill to reclaim the title of most f-bomb laden game after it was taken away by Mafia II.

No Such Thing As Too Much

Over the top is the best way to sum up the House of the Dead: Overkill experience. Because of its on-rails, light gun shooting nature, the game just keeps throwing more and more at you without mercy. While the game can be played with a Dualshock controller, as a single-player experience, it really comes into its own as a local co-op experience with the Move controllers. As to be expected, the Move controller is incredibly precise when it comes to shooting, which may surprise some veterans of the game on the Wii who might be used to the more generous targeting detection of the earlier version. Mechanically however, both console versions play identically; you’re taken from one environment to the next, shooting at anything that shambles. Like the Wii version, you can play through the story-mode and enjoy unlimited continues, and, once finished with that, you can play a “Director’s Cut” version that lengthens levels with some new content, new monsters, and a limited amount of continues. The new content specific to the PS3 is the addition of 3D, trophies, Move compatibility and some new chapters that round out the experience of Varla Guns and her friend Candi Stryper.

Because this is a light gun game made for consoles and not an arcade port, it’s considerably longer than you might expect, clocking in at about 3-4 hours total playtime. Added onto that is the Director’s Cut mode, extra challenges and mini-games, different collectibles and the ability to replay levels to “grind” them for money to upgrade your guns. For a simple point n’ shoot game, there’s a surprising amount of longevity in it. But of course, the most important question you should have for a shooting game is, “Is it fast n’ furious?” and the answer is a resounding “Yes.” The pacing of the game is quite accomplished and the new levels manage to fit into the previous campaign without feeling shoehorned in. As the story progresses, you can’t help but start clenching your fists as the game demands more and more from your reflexes, even as the plot itself becomes more and more ridiculous.

Right now, if you have the Move system and you’re looking for a good light gun game, this is probably the best one available for the console. It may have started on the Wii, but it’s come into its own with a significant graphical and performance upgrade on the PS3. You won’t get a lot of in-depth gaming that pushes the medium in new and interesting ways, but if you just want to sit down with a friend and shoot things to the accompaniment of a bizarre, off kilter story and excessive swearing, this is your best and only option.

Right now, if you have the Move system and you’re looking for a good light gun game, this is probably the best one available for the console.