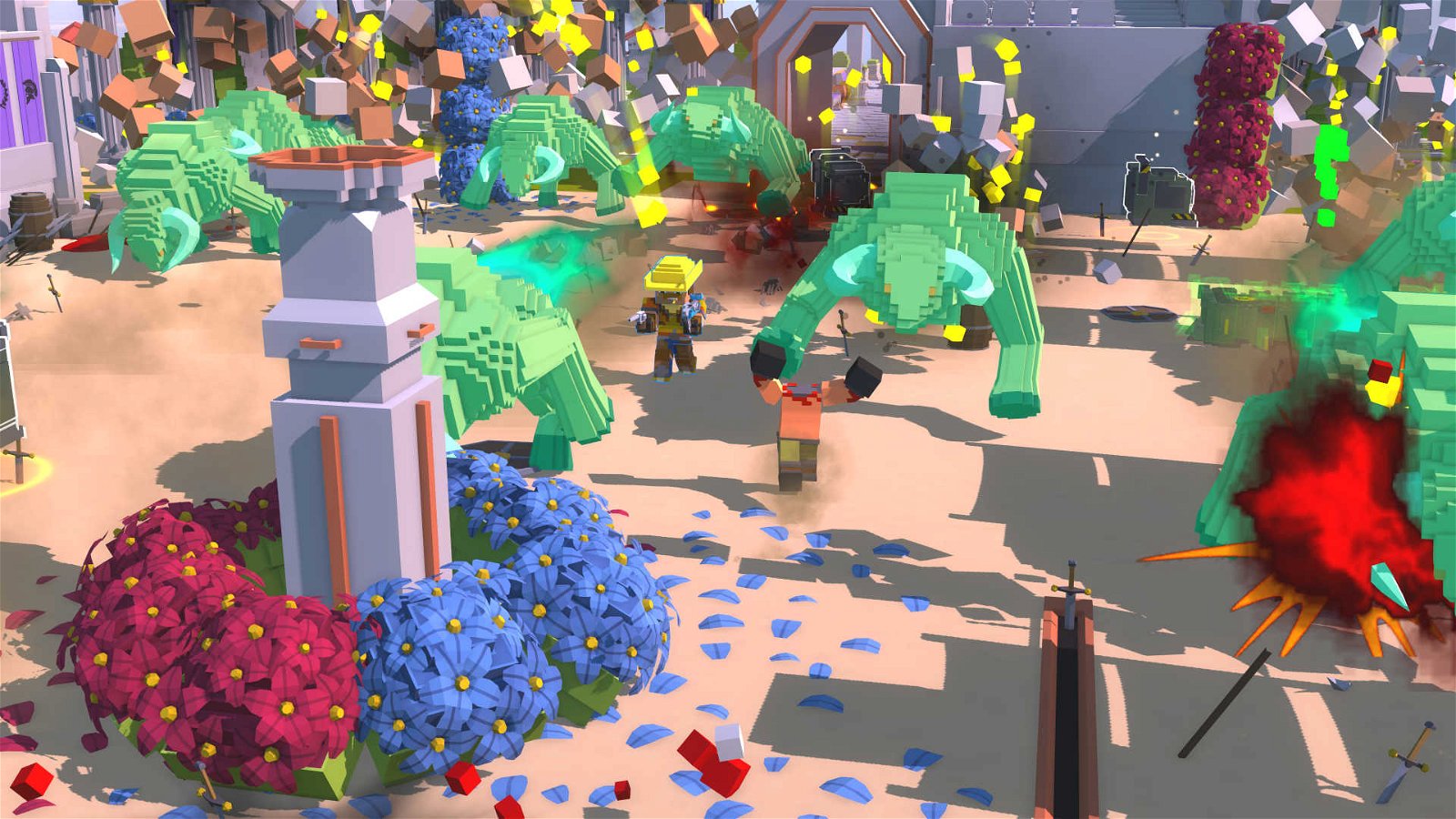 Sometimes you need to sink your teeth into a big, juicy, meaty game, packed to the brim with depth and story, tight, complex mechanics, endless scenarios and hundreds of hours of gameplay just to scratch the surface.

And sometimes you just need something fun.

I Hate Running Backwards is just that – fun. A lot of fun. The kind of fun where find yourself seven hours later after promising yourself that you were just going to play it or a few minutes because that assignment isn’t going to finish itself but there you are, lying to yourself that this next pass at it is going to be the last one. But you know, deep down, that it most certainly isn’t.

Anyway, I Hate Running Backwards is another genre mash-up that seems to be popular with the kids these days, combining elements of endless runner, rogue-like and the classic shoot ‘em up. Players take control of one of the characters, most of which are all borrowed from other Devolver Digital properties such as Hotline Miami, Enter the Gungeon, Bro Force, Shadow Warrior, and Serious Sam. Your mission: defeat the onslaught of enemies from the same properties and get as far as you possibly can without dying. Along the way, you’ll find a selection of weapons, perks, and power-ups to help you out with your mission. The twist here is that instead of everything coming at you from the top like a regular ol’ shmup, everything comes from the bottom. You and your adorably pixelated hero must endlessly run backwards and keep ‘em all at bay as you try to progress through the map.

The inclusion of a local co-op multiplayer mode in a game like I Hate Running Backwards is always a good idea, making getting through the levels a lot more fun and, provided you have a skilled teammate, easier to get through the stages without having to start over, provided one of you can stay alive long enough for the other one to respawn. Whether you play it by yourself or with a friend, you’ll find that shooting endless baddies, destroying the almost entirely destructible environment—a necessity, as this is a great way to boost up your meter to unlock character perks like additional life, better healing, stronger attacks and defense—and basically trying to just survive it all, is highly addictive.

You are given limited HP in I hate Running Backwards, and when it’s gone, you’re done and sent back to the beginning of the game. But instead of starting over, the map refreshes and you’re left to face a whole new layout, a new pattern of enemy attacks and area layout. The procedural generation of each new start keeps the gameplay fresh, and even though I died—a lot—for the first half hour of playing, I wasn’t once left with that frustrated feeling that comes with the tedium of starting over and learning a game. It also gave me an opportunity to learn different strategies for the wide variety of enemies I faced: where the melee spin attack was most effective (it was great for those “oh my god they’re all up on me” moments and certain projectile attacks), when to save your most powerful attacks and ultimate attacks, and so on.

There was a drawback to this, however. In a typical shoot ‘em up, the endless repetition serves a purpose – to train you in the different mechanics that will eventually become your ultimate weapon in boss battles, because knowledge is power, you see. In this case, because of the fact that each playthrough in I Hate Running Backwards is procedurally generated, not every mechanic can be learned quickly through trial and error. For example, I didn’t always get enemies that shot things at me, so it didn’t really occur to me until quite a few play-throughs in to use my spinning melee attack to defend against projectiles. Because of that, I was baffled in terms of strategy when the first boss, with its constant stream of laser-bullets forcing me off to the side of the rail, came around. It was easy enough to get to the boss because a simple strategy of shoot-first-ask-questions-later seemed to do the trick with most of the enemies I’d come across until that point, so the difficulty spike once I hit the boss was a touch jarring. That being said, my couch-mate and I after numerous tries and more than a few adult beverages later did eventually figure out the trick to take it down, thanks to the amount of trial-and-error opportunities this game afforded us.

Now the maps in I Hate Running Backwards, themselves, were fun and fresh with each playthrough. Throughout each stage, a variety of different environments like ruins, marshlands, minefields, and some with their own mechanic, such as jumping into a jeep and mowing down powerful beasts that attack from the bottom of the stage, keeps you on your toes. At the start of each new map regeneration, I found myself looking forward to (or dreading) the sequence of events that lay before me.

But the main selling point of I Hate Running Backwards is the unlockables. In addition to the aforementioned 12 characters, each with their own set of strengths and weaknesses, that can be unlocked, there are many super-powered weapons that you can find and unlock throughout each play, including (but not limited to) a Shrapnel Umbrella that sends bullets ricocheting throughout the whole screen, a drone gun that hovers above you like a little buddy of death, and, my personal favorite, the Disintegrator Ray which is very effective at making enemies go fizzle-sploot. Oh, and did I mention that they act as a second weapon you can dual-wield? Well, they act as a second weapon you can dual-wield. Unlocking Lo Wang from Shadow Warrior and loading him up with a tonne of ammo and my beloved purple disintegration ray made me cackle with delight as I mowed down the monsters and aliens that though they could get the better of me (side note, they did, in fact, get the better of me the first time

because Lo Wang only comes with two HP and at the time of unlocking, I needed significantly more to get through the level).

An honourable mention goes to the flavour text in I Hate Running Backwards. At certain times, like getting a special weapon or powering up, characters would throw out some great catch phrases like “double the guns, double the fun”. I may have incorporated the amazing metal sting that sings “SERIOUS DAMAGE!” into my daily speech, much to the chagrin of my colleagues.

For those looking for an extra spot of challenge, there are daily events you can test out once a day – there aren’t any do-overs here. Each challenge comes with a set of conditions you must meet and restrictions that are applied to your playthrough. Stay alive, get a high score and you may find yourself on the leaderboard. Although, be warned: there isn’t a lot of explanation at the start, which is a little bit frustrating for something that’s a one-shot-per-day deal.

I Hate Running Backwards isn’t very deep. There’s no story to speak of and you’re not going to spend endless hours exploring its world. But it doesn’t claim to do that. Instead, it’s a fun, classic arcade style game that is surprisingly addictive. If it wasn’t for that spike in difficulty during the boss battles, it would be a great game for anyone. But don’t let that deter you. It’s saving grace is the fact that its refreshing approach to the genre keeps you coming back for more in spite of all that. And for its price point, there’s no excuse not to pick up a game that appeals to the game addict in all of us. Just. One. More. Round…

I Hate Running Backwards is a much needed and refreshing tribute to the classic arcade shoot ‘em up, that, in spite of a few odd difficulty spikes, is highly addictive and absolutely worth the time spent—and at times lost—to it.