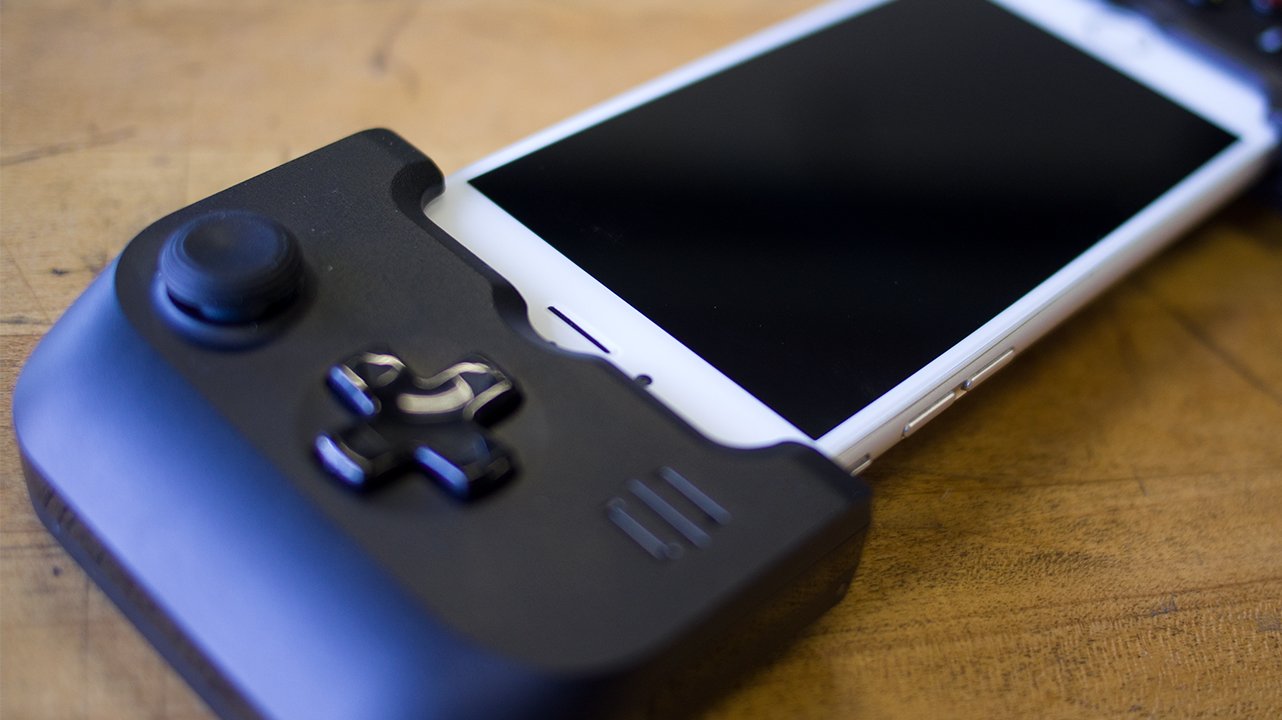 One thing I should state before jumping into this review is that I don’t like gaming on mobile devices. When friends show me new or classics games hitting their respective app stores I always get excited to try them out and then get quickly disappointed when I have to deal with poorly implemented touch controls. Nothing feels comfortable and a majority of my time is spent fighting an unwieldy camera. The Gamevice I reviewed previously was a good solution to my problems, thanks to its vast library of compatible games, but there were some glaring flaws that hampered the experience. Now that a new model has been released, let’s take a look and how this mobile gaming accessory has evolved.

The new Gamevice for iPhone 6 through 7+ borrows much of its core design from the previous iteration. The body of the device is still made from solid matte black plastic and extends out from its portable state to snuggly lock in any of the compatible iPhones via the lighting connector. Even though I had no worry of the fit coming loose and endangering my iPhone to a nasty fall, it should be noted that cautious users with protective cases will need to remove them in order to use the Gamevice.

Once in hand, the Gamevice still feels as comfortable as I remember. The spacing of the buttons and the analogue sticks are well thought out, and even after an hour of testing my hands didn’t feel cramped. The best improvement on the new Gamevice is easily the analogue sticks. Originally, these sticks were smaller and made of plastic, but Gamevice decided to improve them by making them out of rubber and functionally similar in design to PlayStation 4’s popular Dualshock 4 controller. Unfortunately, the buttons, d-pad, and bumpers didn’t receive any new revisions or jump in quality to make the device even more comfortable to play with.

A feature I miss from the previous Gamevice is the onboard rechargeable battery. While the company is saying the device is as efficient as a pair of headphones, my iPhone was definitely draining faster than while using the previous model during any of the gaming applications I tested in the original review. To put ease on users who heavily use their phone for gaming the Gamevice does feature an external lightning port to charge their phone, but that same port cannot be used for their lightning compatible headphones.

For the first round of testing with the new Gamevice I used the same SNK classics from the original review to test out responsiveness and delay, which proved to be on par with the first model. Thanks to the improved analogue stick, though, performing Supers in Garou: Mark of the Wolves and aiming precisely across any of the Metal Slug titles felt much more natural. To expand on my testing I tried out Marvel: Contest of Champions, as well as Bully: Anniversary Edition. While I instantly disliked Contest of Champions gameplay because it doesn’t play anything close to a proper fighter, Gamevice mapped every slashing motion and touch properly to their hardware. The only problem I experienced while testing these titles was that I had to remember what every button was mapped to by heart because the instructions are still asking for touch related prompts instead of traditional controller inputs.

The Gamevice has certainly improved hardware wise with its latest iteration, but I can’t say the same for its list of compatible games. While the Gamevice Live app does allow users to choose from over 800 games to play, the pool of quality titles to experience still feels shallow to me. This point, of course, is subjective, as current mobile junkies will more than likely identify games that I’ve missed that they would love to experience with a controller add-on. This kind of luxury though still costs a hefty $99.95 USD. Current mobile users should definitely explore the compatibility list for enough titles to play on Gamevice’s website before they consider purchasing the device.

The latest iteration of the Gamevice for iPhone is one of the strongest members in the controller add-on market for mobile devices.