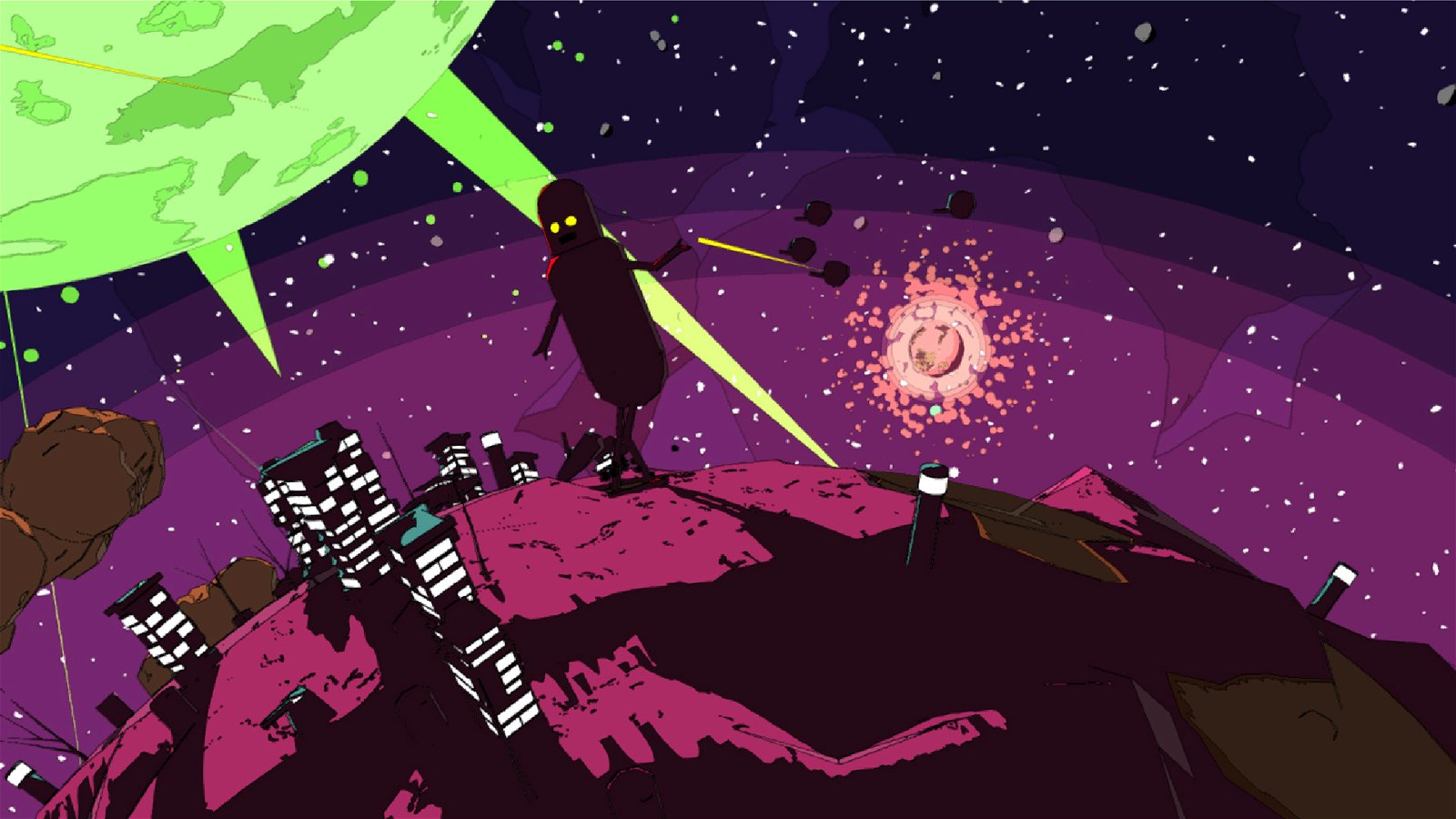 Jettomero: Hero of the Universe gives players a cosmos of endless beauty to behold and photograph—a game seemingly built to create striking screenshots. Yeah, you’re supposed to be saving humanity from alien invasion, but staring out into the purple, red, and blue planets that shimmer in the distance, bathed in the rippling lights of a green sun constantly distracts from your mission.

Then a rocket hits you in the head, reminding you to get back to work again.

Jettomero’s robot hero of the same name awakens in the void of space, unclear of its origins but wanting to help the people who live on the planets around it. The colossal machine, however, is unsure on its feet, stumbling around like a gigantic tipsy toaster as it tries to find the menacing giant aliens that are causing trouble for humanity’s galactic civilizations.

Finding troublesome giant monsters is a slow task in Jettomero. Players are given several planets in each of the game’s solar systems, being able to fly to any one of them and have a look around. These places will contain little colonies of people in tiny buildings, gemstones players can retrieve to fuel their thrusters, collectable robot parts buried under the surface, and if they’re in the right spot, an alien to fight.

Collecting fuel and decorative parts without stumbling over top of the human colonies can be a bit of a trial due to Jettomero’s clumsiness. The robot will follow the general route you direct it to, but wobbles back and forth on its legs, making it hard not to accidentally crush any nearby buildings that might be in the way. Should players plan its route poorly, or skirt a little too close to an apartment complex and topple it over, the poor robot apologizes profusely with a comic book word bubble. It’s a simple touch, but brings up the kind of awkward sense of embarrassment one might feel from nudging someone on the subway. Just, you know, on a home destroying level.

These comic-book-like bits of dialogue help create a sympathetic bond with the character when used alongside its simple, yet heartwarming, movements and design. The blank look on its face and the simplistic robot design, when combined with its beeps and boops and apologetic word bubbles, gives the protagonist this innocent air despite its accidental destructive powers, making the player feel for it. It’s childlike in its desires, but seeing this silly robot and its endless enthusiasm to help despite its clumsiness, makes it hard not to want to root for its success.

It doesn’t hurt that galactic exploration makes for some beautiful sights. Players will be able to use their thrusters and take to the stars whenever they feel, flying around planets of brilliant greens, blues, and reds. Comets will float by, moons will drift past, all as brilliant rays from the sun rain down. It’s a feast of varied colors against the black backdrop of space, constantly providing new, breathtaking vistas that demand the player just stop and look for a while. Jettomero features various photo filters for players who feel compelled to take screenshots of the pretty sights, a welcome feature for a game that naturally creates so many pretty places to stumble across.

The music encourages a relaxed mood as players meander the galaxy. The various tracks are soothing and calm, taking players away from the pressing issue of alien threats and the human crankiness towards Jettomero, seeming to draw them into the sheer scope of the space around them. For players who enjoy getting lost in this world, they form a perfect mood-setter to just take a few photos and chill.

Those who want a bit more from the game may find it a bit repetitive. While the galaxies are different and the planets on them are as well, the planets do tend to be made up of similar sporadic settlements, forests, lakes, and items. For those interested in saving the galaxy or collecting new parts, the planets all feel pretty much the same after a time, save for some layout changes. Go here, snag a part or two, grab fuel gems, look for an evil alien, then fly to the next planet. If players are tackling the game just for this aspect, it does become quite dry. Although the new parts for Jettomero are all quite silly and fun.

Likewise, it isn’t very hard. Jettomero is an indestructible hero, so even if the humans are peppering it with rockets, it will only cry out ‘Ouch!’ or ask them to stop. Tethers may try to slow the robot down, but players can tear them free by continuing to walk. Even the QTE eye-laser battles between Jettomero and the alien menaces only result in knocking the robot off the planet for a moment, with players able to land and fight again in seconds. It won’t draw a player in with its action.

Jettomero’s actions—the pained cries, the endless enthusiasm to help even if being carried off a planet by an explosion—only help strengthen the player’s connection to the silly robot, though. It’s not challenging, and exploration for reward can seem tiresome after a bit, but following the robot in its mission across space never ceases to be charming. When it limbos under a bridge to avoid knocking it over, when it shouts how it wants to help as it stumbles along a planet’s surface, or when it strikes a superhero pose when facing evil, it draws the player into its endless enthusiasm.

Jettomero is beautiful, soothing, and boundlessly cheerful, with a robot protagonist who’s easy to love in its innocence. It may feel overly simple or even tedious in moments, but then, suddenly, it arrests you with a vision of the stars and planets of how tiny your presence is among them. Or, it can arrest you with the sheer heart of the blank-faced machine you share your journey with.

Liked this article and want to read more like it? Check out more of Joel Couture’s reviews such as The Evil Within 2, and Dishonored: Death of the Outsider!

Jettomero: Hero of the Universe arrests with its vision of the beauty of stars and planets, as well as the sheer heart of the blank-faced machine you share your journey with.