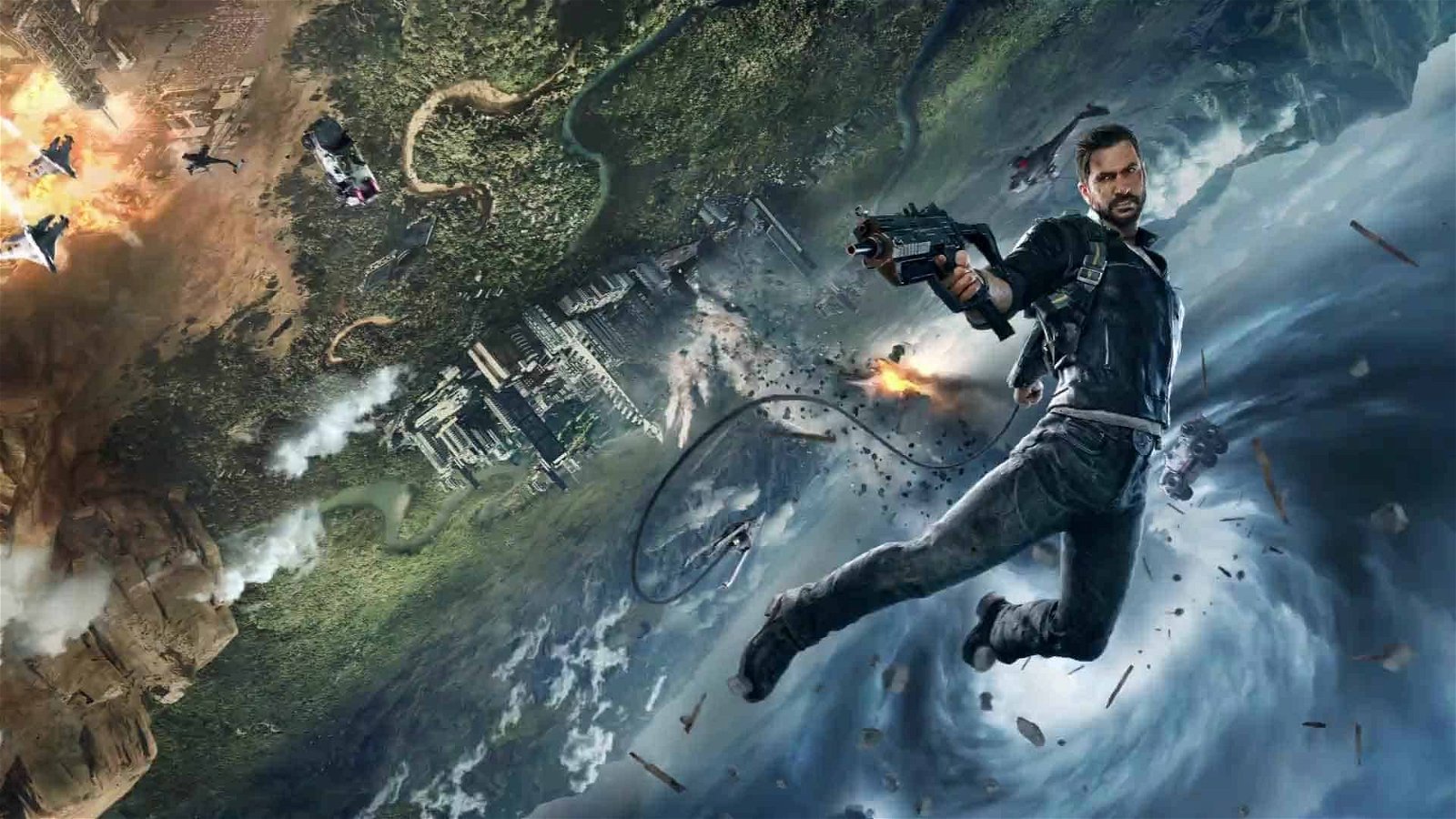 Rico Rodriguez is back for more zipping, tethering, and blowing everything red up action in Just Cause 4, the sequel that doesn’t do a whole lot new but is still fun to play. Some fictional Latin American country is under siege once again, this time by the Black Hand, an army of mercenaries that has seen quite an upgrade since the first game, and it’s up to the Army of Chaos and the Dos Equis guy with a squirrel suit to fight back and liberate the citizens.

For those who have never played a Just Cause game before, like myself, the game wastes very little time in teaching you how to use the various tools that make up the bulk of the gameplay. As a newcomer to the series, I can very much appreciate how, by the 4th entry, most of the target audience already knows what they’re doing, and starting over from scratch would have been incredibly tedious and boring. The gameplay mechanics are introduced in a natural but accelerated manner over the course of a fun and brief tutorial mission. This is how to use your grappling hook, this is how to use your parachute, red things explode, now go have some fun. The only jarring moment—again, from the perspective of a first timer—was the fact that I dropped a lot of hours on Spider-Man during the Fall and Rico, despite having a similar set of abilities, cannot swing or stick to walls. Other than that, the controls feel instantly intuitive and click rather quickly.

Rico’s grappling hook comes with a lot of upgrades this time around, in the form of lifter balloons, rockets, and the tether system. As you can guess, the latter is used to link two objects or people together and snap them into each other. This can be used to open giant, heavy doors, rip apart engines, or simply attach an enemy human to a giant rotating ball and watch them spin around until you release the hook and send them flying into space. The Air Lifter mods are a bit more diverse. The basic function works like this: shoot a tether, attach a balloon, watch that character or object become airborne. As you unlock more mods, you can make the balloons explosive, flammable, explosive or flammable only to your weapons, or totally indestructible. Other mods allow you to point where you want the balloon to go or follow you, amongst others. Finally, my personal favourite modification, are the boosters. These are tiny but powerful little rockets that can be attached to enemies or objects that when fired up, will send them flying in whatever direction (or directions) you like. These boosters can be modified to hell and back as well, allowing the boosters to fire at various strengths, for set amounts of time, and explode upon burning out—if you so desire. All these modifications can be swapped in and out of three customizable , allowing you to experiment wildly in the giant sandbox that is Solis.

Outside of the fun and often hilarious sandbox gameplay mechanics, however, the game falls apart. The storyline is the most blasé generic excuse for open-world combat that you’ve likely seen through a million times, and the characters are about as cookie- it gets. On top of that, the voice acting, while half decent, becomes a when you realize it’s mostly white Americans doing their of suave and badass Latinos, with all the awkward faults . Most of the audience won’t notice, but if you’re a native you’re going to laugh at the accents.

And here we get to the most obvious blemish in Just Cause 4: the graphics. If you’ve ever read any of my reviews you’ll know that I am a gameplay first, presentation later kind of guy. I don’t really care what a game looks like if it plays well, but even I was floored but just how dated the game looks. I am not exaggerating when I say that JustCause 4, released in 2018 for the PlayStation 4, looks like an early to mid-generation PlayStation 3 game. The explosions look fantastic, and the environments are passably decent, but man oh man the character models and buildings look brutal. Flat, painted textures, NPCs that neither move nor talk, characters that look like they’re floating on air when they’re supposed to be standing on a surface, and a resolution that often scales down to a laughable720p. I I don’t normally care about graphical fidelity and visuals, but this is ridiculous given the release window and how close we are to the this generation.

Just Cause 4is more of what you’ve come to expect from the series. Open-world, sandbox gameplay that, while rather repetitive in mission design, allows for experimentation with its litany of modifications and physics fun.Atrocious visuals, generic story and characters, and unimaginative drag the game down. It’s great for brief pick up and sessions, but if you’re looking to dive deep into the world of Solis and Rico Rodriquez you will be left wanting—especially at full price. 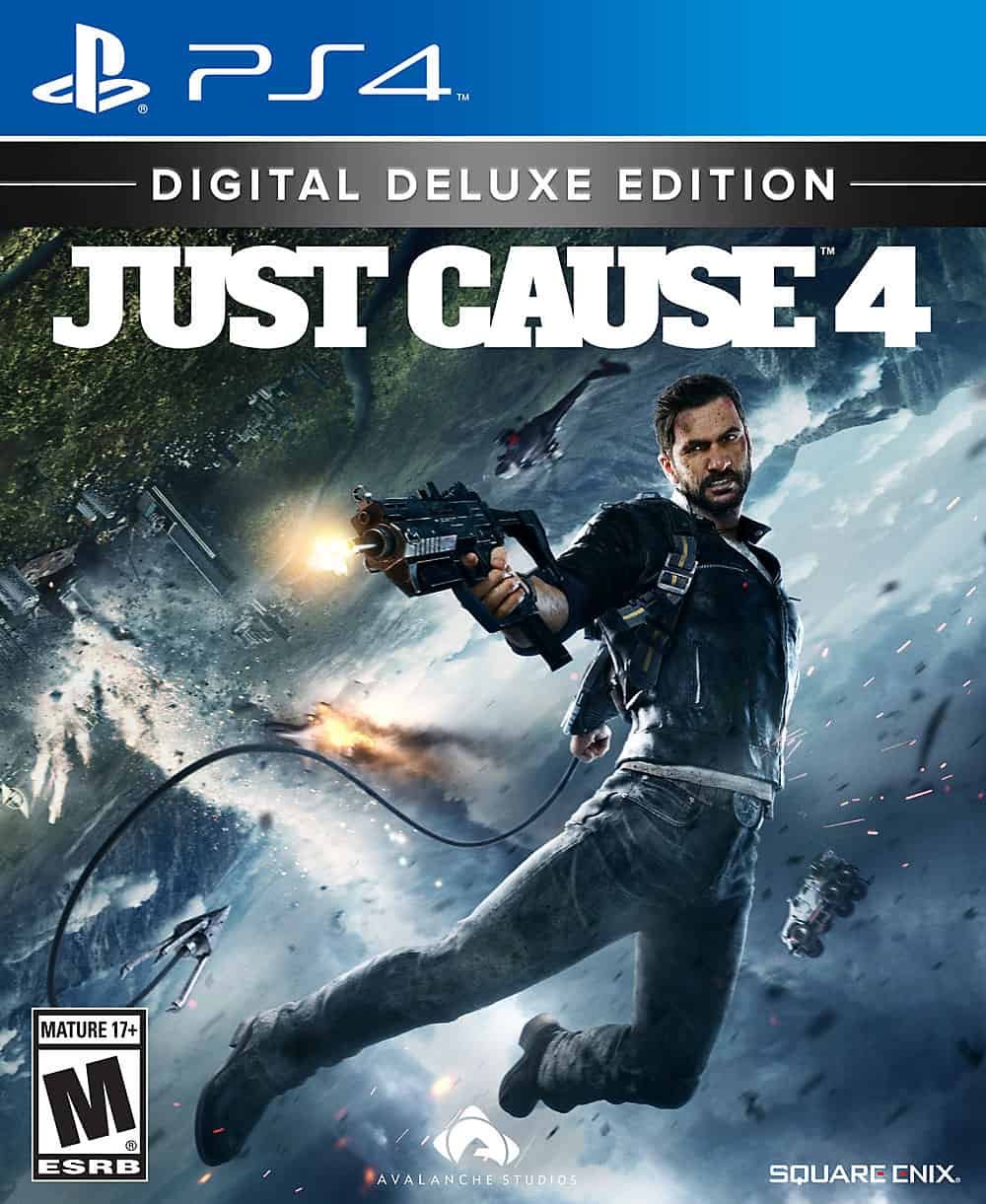