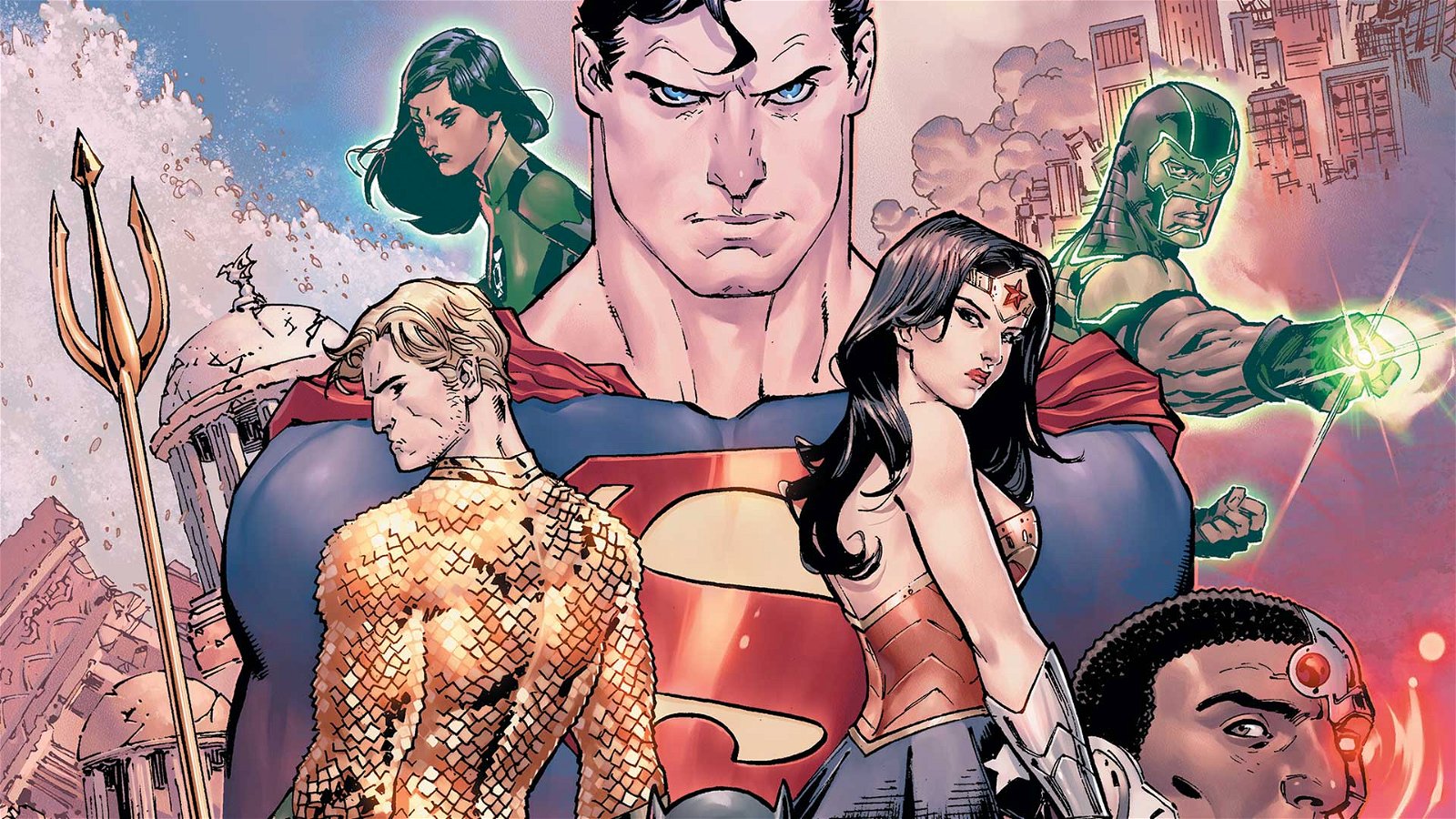 The world is in peril. Massive earthquakes are erupting all over the globe. Alien warships have landed, taking humans at will. Four giant luminous humanoids, called the Kindred, have risen to enact their Purge. The stakes are high and the only ones standing in the way of full destruction are DC Comics’ greatest superheroes.

Just another day at the office for the Justice League.

Justice League #1, the first issue following Justice League Rebirth #1 , starts with pedal-to-the-metal action. This five part series, titled The Extinction Machines, takes readers down a non-stop thrill ride of a storyline. The regular starting lineup is here – Batman, Wonder Woman, Aquaman, Cyborg, the two rookie Green Lanterns and the Flash, all except the Man of Steel. The Superman the Justice League knew in The New 52 is dead, and with this new Superman, there are trust issues. Batman, the most skeptical of the Justice League, must go to Clark’s home and ask for his help. Accompanied by Cyborg, the Last Son of Krypton needs to take a boom tube down to the Earth’s core and try and stop whatever it is that’s creating the devastating earthquakes.

Writer Bryan Hitch does a solid job kicking off Justice League’s first mini-series in DC’s Rebirth. All our heroes get their time to shine. Without each pulling his or her weight, the world would surely perish. The one flaw with Hitch’s The Extinction Machines is the pace. The action moves so quickly, it feels rushed. Perhaps if the series was extended a bit, the pace could slow down at points, allowing the reader to catch his or her breath and enjoy the relationships between DC’s Finest. There is a well-crafted moment between Batman and Superman and his family in issue 3. For this reviewer, there needed to be more moments like this. Not an oversaturation of them, but at least a few more to allow those small moments to give depth to the story.

The Extinction Machines is illustrated by Tony S. Daniel. Daniel does a solid job bringing Hitch’s story to life. His greatest moments are in the action, offering visually arresting, larger-than-life splash pages. You can’t help but slowing down to take in all the intricate details.

Looking back at The Extinction Machines, it’s a decent start to the Justice League’s new life. The series never had me salivating for the next issue, but I wasn’t turned away either. It ran the middle of the road, being an above average series but never really giving readers that explosive first taste of Justice League – Rebirth style. As the team moves forward, my interest in the escapades of DC’s Finest hasn’t waned. Watching a group of powerful superheroes work together as a team is still fun. My hope is that the team behind Justice League Rebirth will utilize the natural consequences of people working together –great conflict and great collaboration.

Come on, DC. You know you can do better with the Dark Knight, Man of Steel, Scarlett Speedster, and Amazon Princess at your disposal.

The Extinction Machines kicks off Justice League’s Rebirth with non-stop action, sometimes at the detriment of the work.