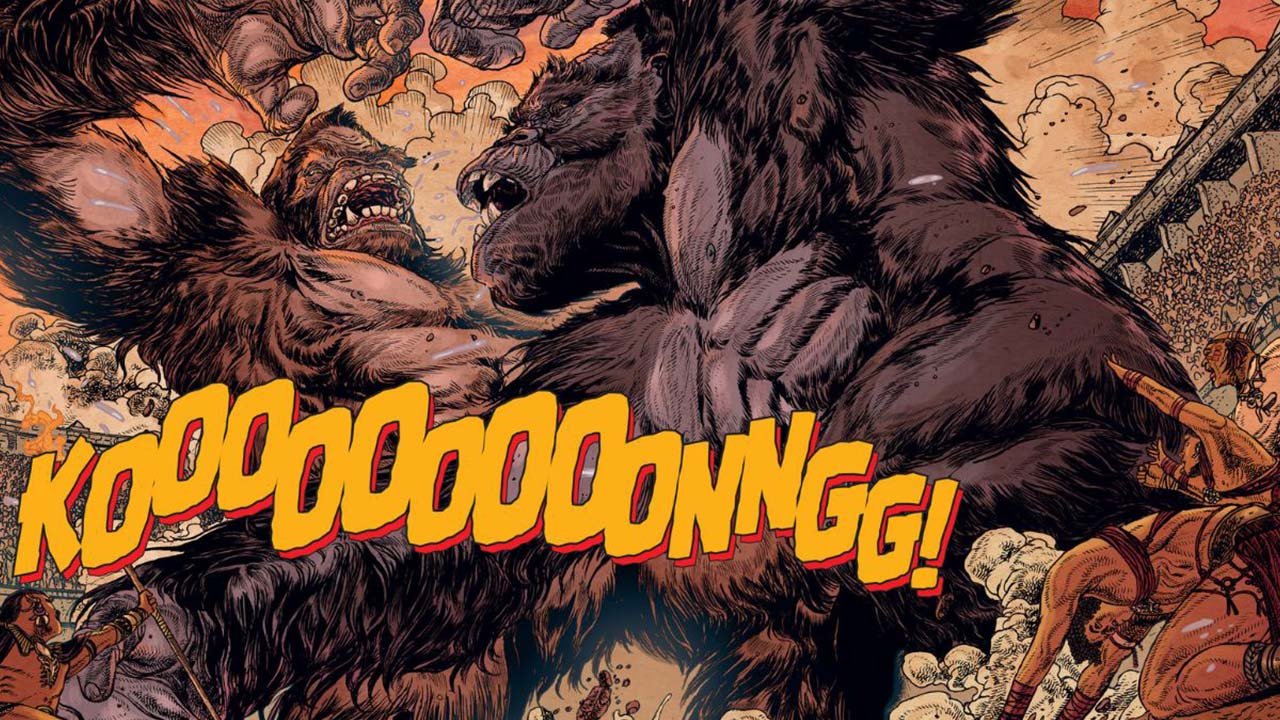 I have a soft spot for King Kong. It originated with the 1976 remake starring Jeff Bridges and Jessica Lange, a movie that existed many decades after King Kong originated on the silver screen in 1933. I likely watched the ‘76 remake either on television or a rented VHS tape from a local video store, and the moment King Kong looked deeply at a weary Jessica Lange, something shifted inside me. As the ape was falling in love with her, I was falling for him. Ever since, I’ve had that soft spot for King Kong. In all, King Kong has lived on the big screen eight times, if you include this coming year’s Skull Island. Every few decades, he’ll resurface for another batch of moviegoers to ogle over. King Kong has stood the test of time and I’ve always believed he should be given his due, no matter the medium. That is why I felt so much excitement and anticipation when I began reading Kong of Skull Island by Boom Studios.  The title alone lured me in to purchase the first issue.Kong of Skull Island runs six issues and begins on a remote island. There, two warring tribes have mastered the growth of giant apes—or Kongs—and set them upon one another in an arena to entertain the masses and show dominance over the other tribe. But all is not well on the island. A volcano is about to erupt; an event that will push the warring tribes to evacuate and head toward the dreaded and treacherous Skull Island.

While the title Kong of Skull Island was filled with possibility, the execution housed within the comic series was more of a disappointment. The downfall of Kong of Skull Island is that it’s a rushed storyline by writer James Asmus. The plot moves too fast—there is never a moment to catch your breath. Neither are there clean transitions; many times you are forced to pause, pull yourself out of the story and try to decipher where the locations moved or fill in plot gaps.

One of the greatest things about King Kong is watching him wreak havoc on humanity. In Kong of Skull Island, there are some fun moments when the Kongs are fighting the dinosaur-like creatures of Skull Island, but there is never that seminal moment—that spot when Kong shines and you fall in love with him, or in this case, them. This could be due to the fact that the centre of the story isn’t about the Kongs at all, but the human story…one that fails to be more gripping than a giant ape.The artwork by Carlos Mango in Kong of Skull Island is decent, but it’s not a style I adore. The best part of the series are a few of the covers. Issues #1, #4 and #5 have terrific covers—ones that are so alluring, no man, woman or child could turn away. But that’s never enough. There needs to be far more beneath such wonderful artistry.

Reading Kong of Skull Island was like being in a movie that you know you want to love, but tragically don’t. You even feel a little guilty about not loving it, but the facts are the facts. Kong of Skull Island left me feeling disappointed—like an opportunity at something special was missed.

It breaks my heart but Kong of Skull Island is a disappointment. It never offers a storyline truly worthy of having Kong in the title.