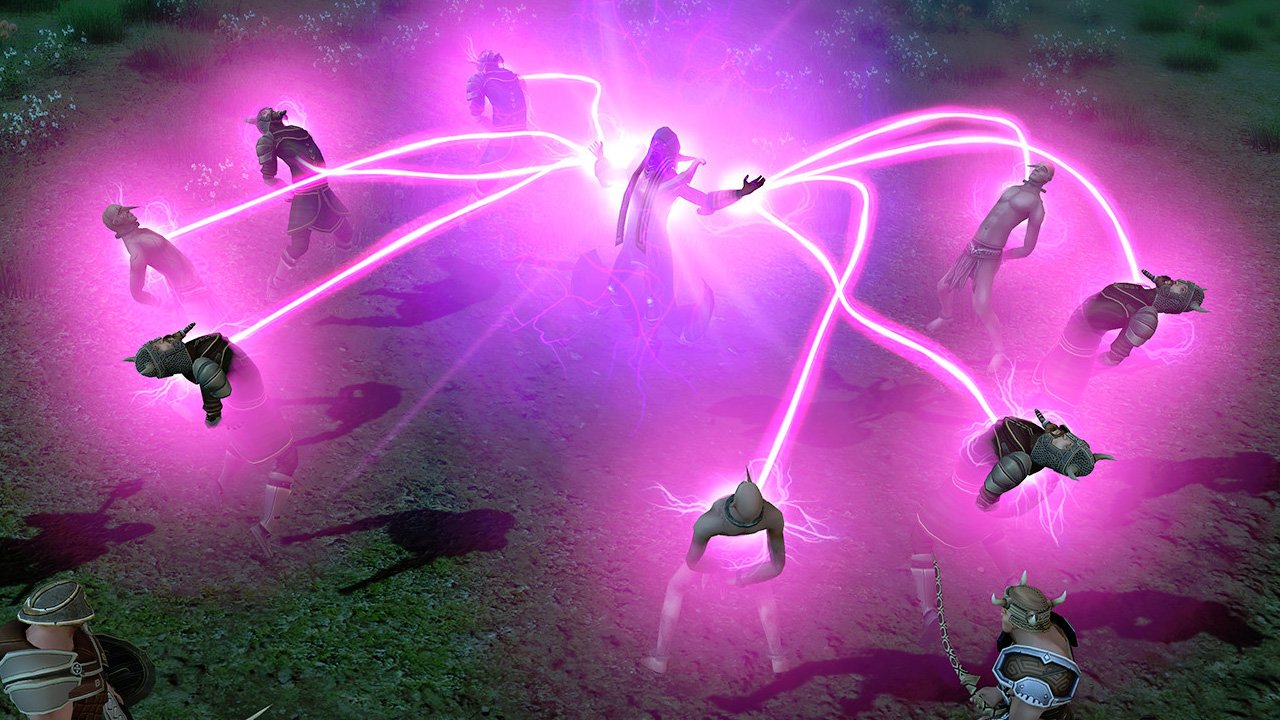 While playing through Tangrin Entertainment’s KYN, I had a hard time coming up with words to describe it. Mixing old-school ideas with new mechanics is usually a recipe for success, but somewhere, the game falls short. Maybe it’s the safe fantasy setting, or maybe it’s the music that I’ve heard before, but something about KYN just doesn’t leave a lasting impression. That isn’t to say it’s a bad game; it’s actually rather enjoyable. With fun combat, a deep crafting system and a truly unique spin to levelling, on paper, KYN should be a game that I rave about, but a flat cast and a world that doesn’t feel different from other similar games leave it hard to feel like much is at stake.

Players are dropped in the fictional Norse inspired world of Heimr. While there are many different races inhabiting this rock, the Aeshir (primitive tribal goblins) and Humans have always been closest. Though wildly different, humans and Aeshir lived in relative peace. That is, until the Aeshir’s foreign policy changed. Luckily for the human race, two generic fantasy dudes just completed months of isolated training to become Magni warriors. There’s Bram, the shaggy-haired warrior class, and Alrik, the shaven-head, goatee-rocking archer. It’s been awhile since anyone could actually overcome the final test, so they’re kind of special. It’s up to them to build a team in order to get to the bottom of a string of attacks. The story unfolds very organically, with small conversations with villagers doing a lot of the world building instead of cutscenes. A lot of the small nuances of the world aren’t said outright; they’re something characters learn from the side quests, and the way people react to different races.
The world is vast and diverse, even if it doesn’t feel particularly connected or bustling with life. It actually feels kind of empty. Each mission drops you into a new area, so it doesn’t feel like one big country, rather several fairly large maps with similar characteristics. I never felt attached to a single person, and I couldn’t grow invested the story because I never felt immersed. A big part of that reason is that there isn’t much to allow the game to stand on its own. Everything from the visuals to the music seemed very typical of the genre. That’s not necessarily a bad thing, but it hurts when it’s trying to make an impression.

It plays like a typical RPG with a new spin. There are over 100 crafting options, characters are customizable with a wide variety of weapons, armour, and magic, but your upgrades aren’t set for the entire game. This makes you think about each space you’re about to go into and plan accordingly. While this is a novel concept, I didn’t find myself using it very often. I upgraded my characters in such a way to compliment my party, and I didn’t feel the urge to utilize that feature. Combat is mostly clicking, with the odd keyboard action to use magic, but it’s not very engaging. The enemies are very generic, and at times my characters wouldn’t respond to a wave of enemies I was trying to get them to attack. There’s also no autosave feature, so there was a lot of restarting from a few hours before because that’s a feature so commonplace that its absence is never really anticipated, even after you’ve been punished multiple times. Still, I had quite a bit of fun. When waves of enemies surrounded my party, the fast-paced, frantic battle in which I could switch from character to character was intense and really brought some genuine moments of joy. If I ever felt overwhelmed, there is a slow-time mechanic to help re-establish myself—and it was much needed.

To put it simply, KYN is a fun game that doesn’t do enough to separate itself from the countless other top down-action RPGs. Heimr is not very unique, the hordes of enemies are uninspired, the cast is boring, and I feel like I’ve played this countless times, just with a different skin. KYN isn’t a bad game; it’s just not memorable in any way. At least a game that is bad can be memorable. KYN is a well-made game, but it won’t leave a lasting impression on me. It’s a very good time, but there simply isn’t enough to make me want to come back to it.

To put it simply, KYN is a fun game that doesn’t do enough to separate itself from the countless other top down-action RPGs.