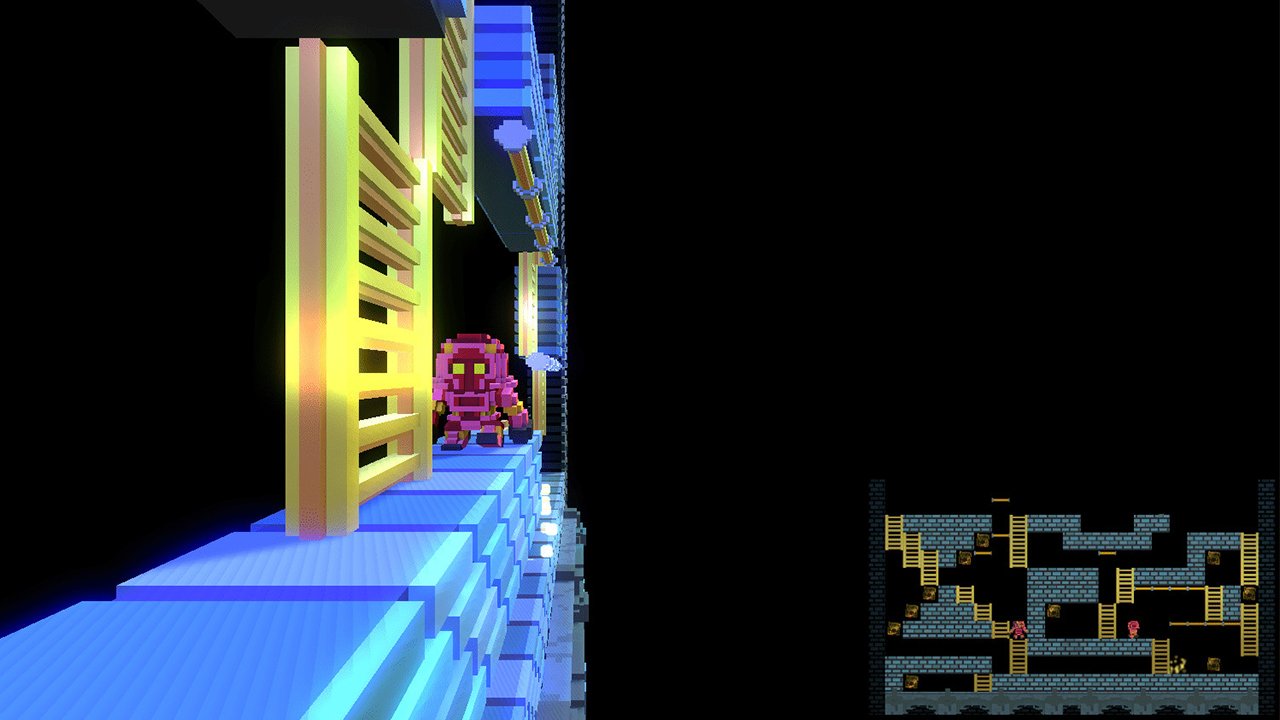 The Lode Runner series means a lot to me, for two very different reasons.

My first go at it was with the Windows edition—you know, the one with the updated visual style and the terrifying death animation where the enemy character models would pull your runner to the ground and eat them, crunching sounds and all. I spent hours creating levels, even if I was the only one who would ever see them. There was a magical quality to it, especially since I could keep my files and revisit them even as each console generation passed me by.

The second time Lode Runner had an impact on me was when I met my wife. I very quickly learned that we both shared a passion for games, and one of the first sessions we shared together was Lode Runner on the NES. It still held up, and over a decade since that point in my life, Lode Runner Legacy, a remixed and updated version of the game, does as well.

If you’re the old fashioned type you can still go on a linear adventure, or opt for a slow burn puzzle mode, as well as classic—read: retro—play, an online component that lets you play crafted levels just like LittleBigPlanet, or of course, delve into a creation mode that has options for characters, levels, and items. It’s a lot for a little unassuming project to handle, but it does. People can come up with some really devious creations, and the leaderboards built into every level keep me coming back.

The only annoyance I have with Lode Runner Legacy is that the “end of level” celebration screen, which is reminiscent of a mobile game—it even has the 3-Star rating shtick—can’t be skipped. Given that characters and items are just re-skins and not wildly different concepts, part of the creation mode feels like a missed opportunity—it would be great if there were some cameos or just more original characters to play with that employed different mechanics—but the basic idea gets the job done. Really, a level creator is big in anything that can keep a community going for a long while, online functionality or not.

As for the gist, it’s basically the same as it’s always been. Your runner can’t actually jump, so you need to work around ladders and blow up blocks to get to where you need to go. The concept is genius as it requires a low skill floor but a high ceiling once the levels really start to ramp up, and you’ll need to plan carefully, lest you end up getting stuck or find yourself trapped by an enemy. All the while an adorable chiptune soundtrack is guiding you, accompanied by restrained sound effects that honour the spirit of the original without feeling overdone. At no point in the game’s 250+ stages did any of the presentation feel inauthentic.

Sadly, my wife and I can’t enjoy Lode Runner Legacy together as there’s no co-op functionality. In fact, other than the leaderboards and interconnectivity—for a creation feature that has long existed—there really isn’t anything strikingly new at all in Legacy. Its moniker even hints that this is the case, but it’s another thing to jump in expecting something different and getting a powerful taste of retro. Not that it’s inherently a bad thing, you just always know what to expect.

Lode Runner Legacy isn’t quite the Pac-Man Championship Edition revolution it seems to be. Instead, it’s a lovingly crafted project that makes a good case for the continued relevance of the franchise. Yes, you can have a guy blow up blocks and gather loot in a retro setting and still have it be fun in 2017. With a little more time and a little more spice, the next iteration could shake up both the series, and the modern retro scene, in a even bigger way.

One part retro, one part modern-esque, Lode Runner Legacy marries much of what made the original so memorable.