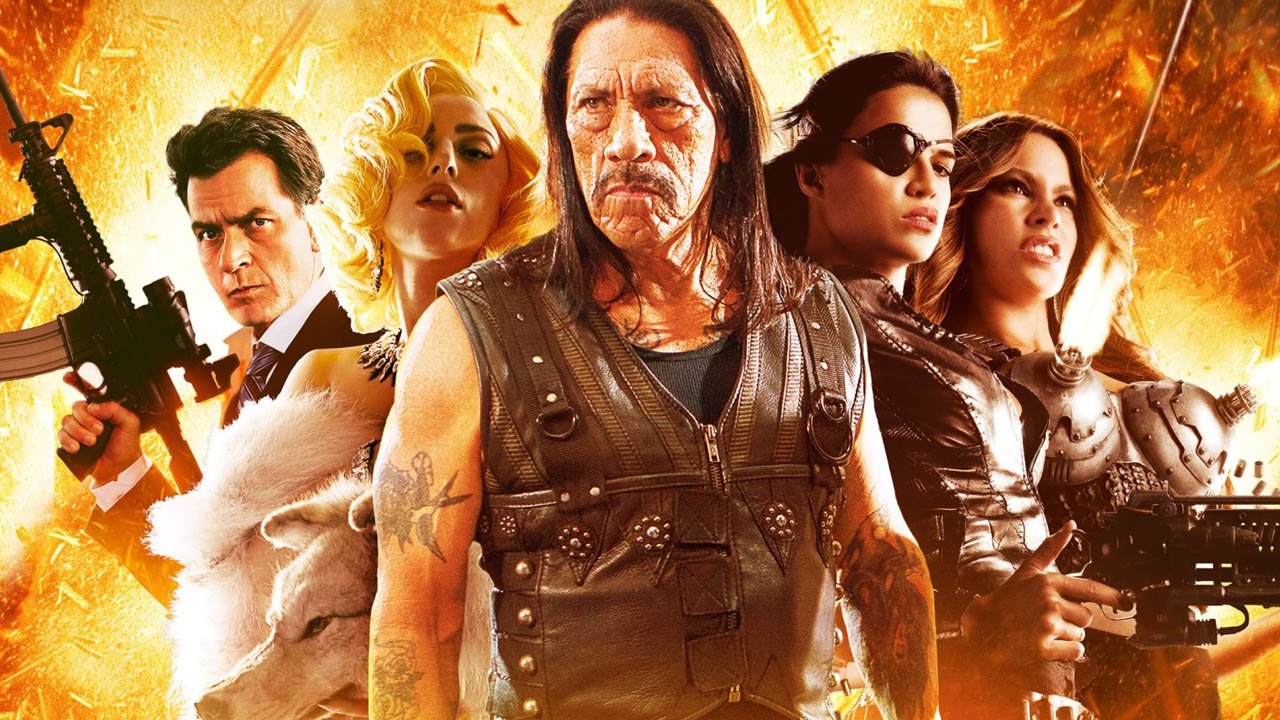 That decapitatin’, mustached wonder known as Machete might not be the first in-joke turned into a film, but it must be the first time a private joke turned into a franchise. Dreamed up while killing time between shots on Desperado (back when Robert Rodriguez wasn’t also his entire crew and had time for such things), Machete was a private joke and fantasy of a B-movie franchise that RR and his muse Danny Trejo referenced in Spy Kids and turned into a fake trailer for Grindhouse. Then the public got in on the joke and found it just as funny as its resourceful creators. So, in 2010 we got a feature length Machete sketch and now Danny Trejo returns to the role he was born to play in the sequel Machete Kills. As you’d expect, the same joke does get tired when repeated ad nauseam, so there’s no denying that Machete Kills doesn’t quite offer the same gut punch of hilarity we all got back when the initial Grindhouse trailer was released. However, the flick offers plenty of filthy laughs, plays right to the strengths of its creators, and brings in a bunch of talented folks slumming for the sake of fun. It’s not exactly art, but it can be damn entertaining. Although, a third movie might be a step too far, even if the sequel opens up with a trailer for it.

That’s right before we get a chance to see Machete Kills, Rodriguez treats the audience to a trailer for Machete Kills… In Space. It’s pretty hysterical, throwing a lightsaber machete in Danny Trejo’s hands for an homage to the old gore n’ nudity packed exploitation Star Wars knockoffs like Galaxy Of Terror.  From there, the sequel goes back into comfortable Machete territory, only this time any sense of the boarder-hopping mild political commentary of the original is ditched in favor of a James Bond parody starring Machete. That’s probably a wise way to go given that the original film ran out of things to say fast and was dragged down a bit by its attempts at political relevance. So Danny Trejo is given a Q in the form of a beauty queen by played by Amber Heard. She stops drooling over our hero just long enough to send him on a mission from the president of the United States (played by Charlie Sheen… who else?). You see, a maniac Mexican gangster (Demian Bichir) has a nuked strapped to his heart that could blow up the US unless Machete stops it. So that’s what happens, and along the way he re-teams with Michelle Rodriguez’s one-eyed killing machine, deals with a psychotic prostitute who has weaponized all of her genitals (Sofia Vergara), and is pursued by an assassin who assumes the face of too many celebrity cameos to spoil. Then somewhere around the third act, the movie transforms into a prequel for Machete Kills…In Space when Mel Gibson is introduced as a billionaire Bond villain who is also clearly a Star Wars fan. Yep, it’s that kind of movie.

It goes without saying that Machete Kills is meaningless and idiotic. That’s the whole point and Robert Rodriguez is one of the best filmmakers around at whipping up meaninglessly idiotic fun. He may have made his most money cranking out Spy Kids movies, but Rodriguez’s true talent is in tongue-in-cheek exploitation like the Desperado movies, Grindhouse, Sin City, and now the Machete series. Countless bodies are blown up, chopped up, disemboweled, and machine-gunned, but not a single drop of blood is shed without a laugh. The Machete movies are comedies first and action flicks second, and Machete Kills pushes that tone about as far as possible. The film is episodic by design and has the same hit-to-miss ratio of a sketch comedy movie. That can make it feel unsatisfying at times, but only if you expect the Machete sequel to somehow feel like a normal movie. It’s not. This is a lark between friends and a good one. No one involved with the project took it seriously even for a second and thankfully the audience is spared the indignity of having to do that as well.

At the center of it all is, of course, Danny Trejo, whose face could stop a speeding train. Trejo doesn’t really act in the movie, but gives a hell of a commanding performance through blank stares and deadpan spurts of monosyllabic dialogue (at one point a racist cop tries to hang him, but Machete’s neck is too damn tough for that puny rope and the look on Trejo’s face at that moment provides possibly the biggest laugh of the film). Trejo’s main squeeze from the last movie Jessica Alba is dispatched early, and it’s a wise choice. Alba might be beautiful, but she never quite had the chops to play her sexualized stereotype with the knowing humor that Michelle Rodriguez, Amber Heard, and Sofia Vergara manage here, and that helps all the bad taste humor go down much more smoothly. Demian Bichir is a wonderfully ludicrous villain until he is dispatched and replaced by Mel Gibson, whose comedic timing and star presence is so strong that he almost steals the film and almost makes you forget all those racist rants (“almost” is the key word). In accordance with Rodriguez’s fast n’ cheap shooting style, the entire supporting cast is filled up with star cameos who popped up for a few days of shooting and all of them seem to revel in the filthy fun Rodriguez provided. Charlie Sheen might provide the funniest of the cameos for being the only big screen president to ever use hippy slang and agreeing to be credited by his birth name Carlos Estevez.

Still, any movie that can list a Charlie Sheen cameo as a strength obviously isn’t setting the bar very high. Machete Kills is unapologetically Z-grade entertainment. Sure, it’s self-conscious Z-grade entertainment to avoid too much guilt from the audience, but still a movie designed for that special class of viewer who consider helicopter disembowelment to be friggin’ hilarious. At this point, the Machete series won’t win over any new fans. You know if you find the joke funny by now and if you enjoyed the last Machete product, this one at least lives up to the brand name. There are plenty of flaws, but one of the fringe benefits of making a deliberately cheesy movie is that all the mistakes and misconceived ideas feel like part of the style. When the film wraps up, you might even want to see Machete Kills… In Space. I’d definitely buy a ticket if that title actually got a real movie but at the same time, it feels like Machete Kills was a victory lap for everyone involved. It’s kind of insane this franchise even exists and not a bad idea for Trejo and Rodriguez to get out while they are ahead. In fact, all of the sci-fi elements of the film feel like Robert Rodriguez auditioning for a job directing one of Disney’s new Star Wars movies rather than setting up a third Machete chapter. Hopefully Disney can look past all the boobs, bloodshed, and bad taste to notice. If Rodriguez can make something this entertaining out of a concept this thin and a budget this low, just imagine what he could do with a $100 million Boba Fett flick. That movie will be made anyways, so the job could (and probably will) go to someone much worse.

“Countless bodies are blown up, chopped up, disemboweled, and machine gunned, but not a single drop of blood is shed without a laugh.”