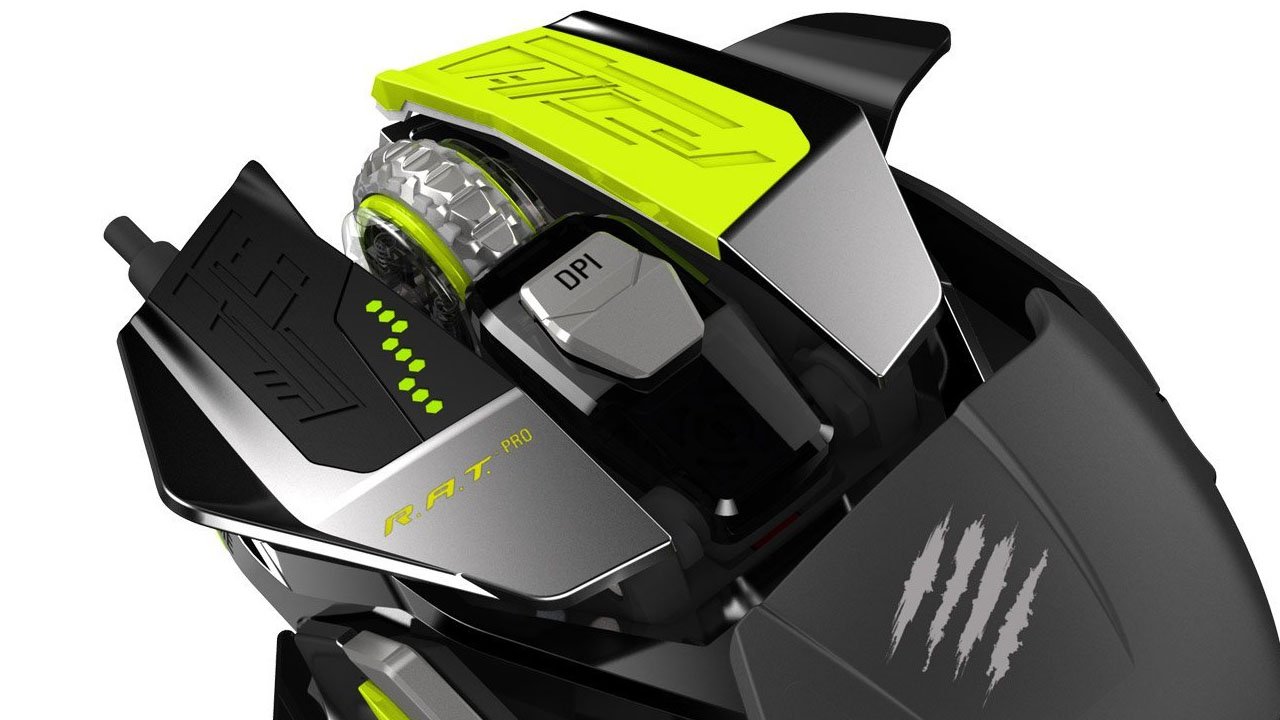 The R.A.T. Pro X is a curious mouse, wouldn’t you say? I mean, just look at it—it’s one of them new-fangled customizable jobs that looks more like it’s out to kill you than bend to your whim. In truth, it took me a while to find a combination of parts and settings that was comfortable for me, but thanks to all the extra swappable bits it comes with, I did finally manage. And once I did, I was quite surprised by what Mad Catz had produced.

Wait, Mad Catz?! You mean those guys who make crappy aftermarket game controllers? I fear I may be showing my age a bit with this, but to me, Mad Catz is known for laughably poor peripherals. My, how things have changed.

I’m going to come straight out and say that the Pro X is too wide for my grip style in FPS games. I’m used to gripping my mouse with just my thumb and ring finger. I love the Pro X, but it’s got no ass, and that means I can’t balance it against the heel of my palm when lifting it up and using the browser buttons to key TeamSpeak at the same time, so it just doesn’t quite work for me. But even still, it was immediately apparent when I first touched it just who this mouse is being marketed to: fans of the legendary Logitech MX500.

I’ll confess I was never onboard with the MX500 hype train, but I’d never attempt to refute its popularity, and I only needed to touch the Pro X but once for it to evoke memories of that iconic form factor. Only now, it comes with a load of swappable and customizable parts, and more software features than I can wrap my head around.

First off, there’s the look of the thing. Normally I hate adjustable mice; they never quite fit right, and they look a bit…angsty. Maybe it’s the colour scheme, or the speed holes in one of the palm rests, or the (what appears to be genuine) carbon fibre detailing on the two different thumb wrests, but the Pro X really reminds me of classic Fox Racing chest protectors. It’s a bit like an old friend—it just looks right somehow. Like the similarities to the MX500, I’m sure it’s no coincidence. The braided cable is a huge winner with me, as well. As are the second set of feet for it, which are an ultra-low friction ceramic material that absolutely wipes the floor with any of the best Teflon feet I’ve ever used. Oh, and how’s this for a party piece: the sensor is modular and can be swapped out with a new one when it comes time to upgrade.

I feel Mad Catz may have shot themselves in the foot on that one, though. There are two optional sensors you can order at the moment, and undoubtedly more on the way, but the packed-in Philips one is already absurdly high-spec. It’s an 8200 DPI twin-eye laser sensor, and frankly, that’s already overkill. Most serious gamers play somewhere between 400-1800 DPI. Most pros are below 800, with the vast majority at or around 400. In theory, higher DPI sensors mean better precision with lower DPI settings, but in practice, the interpolation between CPI and DPI is rarely scaled with lower sensitivities, instead opting for the easier 1:1 which conveys no benefits on lower settings with higher-resolution sensors. The DPI race has distracted most gamers from the real matter of how manufacturers translate CPI.

Regardless, the performance of that Philips sensor has been pretty solid in my experience. Though I do find it picking up quite a bit of noise from the QCK+ I play on, and the sensor damping setting designed to eliminate that leaves the mouse feeling like it’s not a “raw” input. I much prefer Razer’s surface calibration options, if I’m honest. The overall feel and build quality of the mouse is equally solid—a surprise, given how patchwork most customizable mice feel (including previous R.A.T.s I’ve used). And while the form factor left me favouring my Deathadder for shooters, the well-placed precision aim button, with its customizable DPI setting, meant I now favour the Pro X in something like MechWarrior Online where such a feature finds a very niche appeal.

While I think certain features like the ability to push the mousewheel to the left or right to trigger two additional inputs is clever, in practice, it requires two hands, so I could stand to lose that. But being able to swap the grip material for that mousewheel is amazing, and the ability to adjust the force required to scroll it is a Godsend. It still fails to reach all possible markets, as is evidenced by the fact that it’s too fat for my liking, and I’d be lying if I said it wasn’t gimmicky. Crucially, though, for the first time with one of these customizable mice, I’d also be lying if I said it wasn’t a great mouse in its own right. The Pro X does an awful lot of things right, but given that it’s $200, I’d have to side with the ASUS Gladius, as that does everything right. But that being said, Mad Catz are doing things with this mouse that will definitely catch on in the market, and for that reason alone, the Pro X is one of the most important mice to hit the market in a very  long time.

Wait, Mad Catz?! You mean those guys who make crappy aftermarket game controllers? I fear I may be showing my age a bit with this, but to me, Mad Catz is known for laughably poor peripherals.