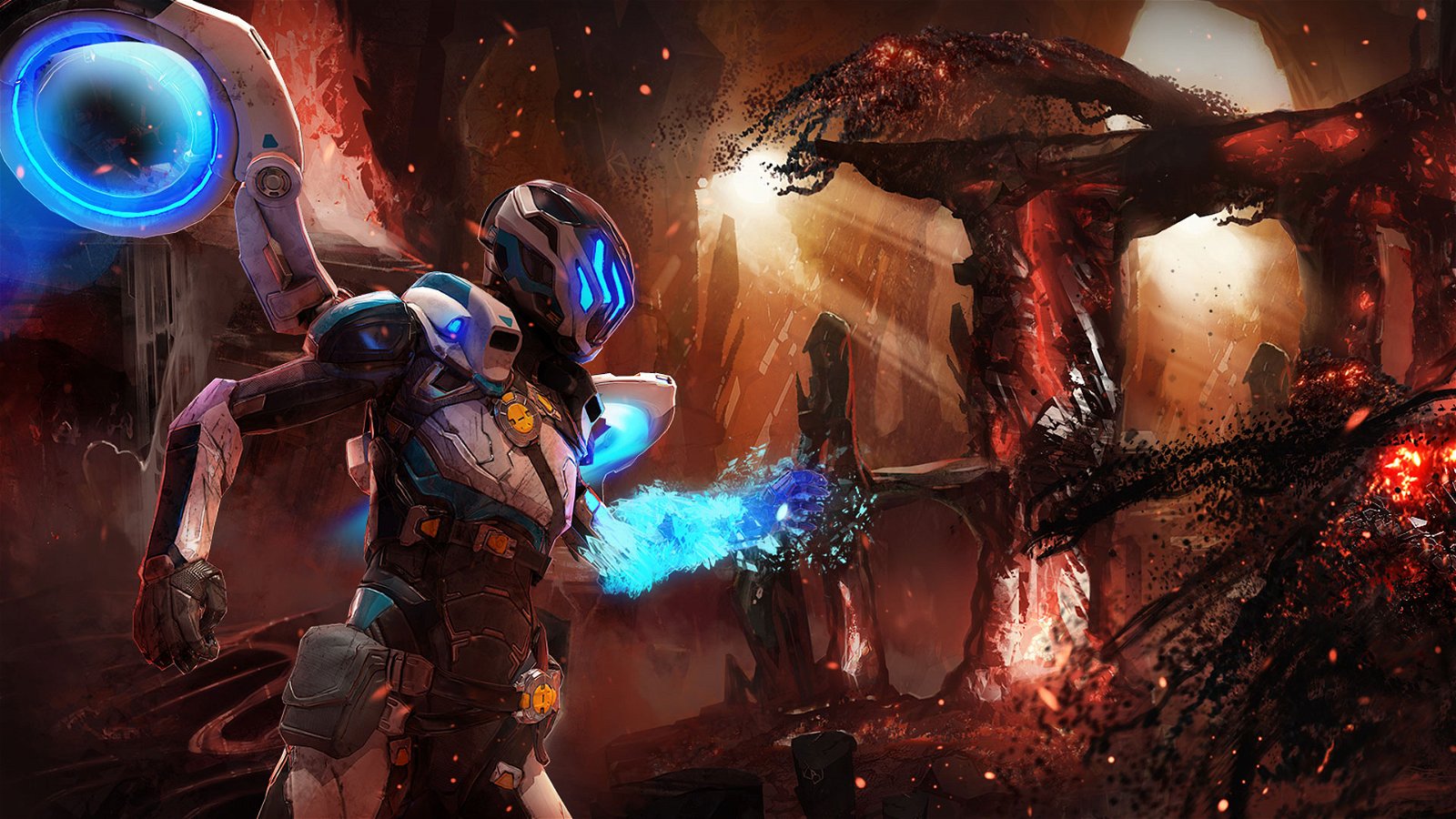 Matterfall is the latest from Housemarque, the studio famous for games like Resogun and Super Stardust. Following the trend set by the earlier games, Matterfall is part side-scroller, and part bullet-hell twin-stick shooter. There’s not a hell of a lot of story to speak of, and the game can be completed fairly quickly. However, anyone who has played a similar game before knows that a long campaign and engrossing story aren’t the draws here. What is important is the game features fluid, frenetic combat, bright colours, a bumping soundtrack, and the ever-endless search for a higher score. In these respects, Matterfall does a fantastic job of delivering great entertainment.

Players take control of a futuristic, power-armoured space mercenary named Darrow, who bears more than a slight resemblance to Samus Aran of Metroid fame. From the reds and yellows of her suit to the beam gun on one hand, the intrepid hero of Matterfall is clearly aping Nintendo’s famous heroine. Despite this wholesale aesthetic rip-off, the rest of the environments and creatures in the game—not to mention the gameplay—are entirely distinct from anything Metroid.

Speed and quick reflexes are the name of the game in Matterfall. Players will guide Darrow with the left stick, and aim/fire her beam gun with the right stick. The shoulder buttons are used for jumping, dashing, secondary weapons, and the platform-solidifying, civilian-rescuing, score-multiplier-shooting matter ray. Levels consist of platforming sections that get increasingly more ridiculous spread amongst combat portions with enemies so numerous and infinitely (not really) re-spawning that there is rarely a break in the chaos. Her dash feature allows her to both stun enemies and temporarily avoid damage, as well as to pass through the blue coloured platforms (that can also become solid if you shoot them with your matter ray). Jumping around and dashing through platforms while also creating new temporary platforms AND attacking/dodging enemies requires some getting used to from a control perspective. The controls are tight as hell, but it did take a while to become comfortable with using all four shoulder buttons while keeping my thumb on the right stick. Old habits die hard, but when the control scheme finally clicked, it became incredibly intuitive and responsive.

There is also some minor exploration involved in finding extra power-ups by way of captured civilians, score multipliers, etc… Every time you rescue a civilian you unlock an “augment” which can range from a new secondary weapon (like a shotgun or grenade launcher) to passive boosts that strengthen you in other ways. For the most part, the levels run quite linearly from left to right in a simple and intuitive direction. You won’t find yourself replaying these levels over and over to discover hidden pathways and secrets. The replay value comes in chasing a higher-score on subsequent attempts.

Getting through the level as quickly as you can and killing as many enemies as you can increase your score, but the real fun comes in the multiplier feature. The more enemies Darrow kills without taking damage, the higher her multiplier becomes, increasing the score exponentially as long as you remain untouched by enemy projectiles. Taking cues from some of Housemarque’s earlier games, Matterfall makes this pretty damn difficult on higher difficulties and later stages.  The thrill comes in executing everything with precision timing: dodging, dashing, firing, and snagging health or score multipliers. Bullet-hell-esque indeed. While not as outrageously challenging as other games in the genre, Matterfall holds enough here for even genre-vets to sink their teeth into.

The company says that the game runs 1080p/60fps on a PlayStation 4 Pro, and 900p/60fps on a standard PlayStation 4. This review was done on a standard PlayStation 4, and the game ran super smooth and looked gorgeous. I can only imagine what HDR will add to a game with this amount of deep and vibrant colour. During intense combat, the screen fills entirely with bright, neon explosions as enemies die, projectiles flood the area, and Darrow’s dashes and score keep popping up. It becomes a tad hard to track at points, but my goodness does it look good. I never experienced any major slowdown or framerate skips, but often I was too busy worrying about staying alive and timing my jumps perfectly to catch any minor graphical glitches anyway.

Matterfall is a certain type of game for a certain type of gamer. Harkening back to the olden days of high-score lists and arcade gameplay, yet with a thoroughly modern and wonderfully slick coat of paint, Matterfall made me want to try over and over for a better score. Accompanying the buttery smooth, chaotic gameplay and beautiful aesthetic is a groovy, synth heavy techno soundtrack. The game is fast, fluid, and tons of fun. It also has tremendous replay value for those who always want to hit just a few more ranks on the leaderboards, though it can also be picked up easily enough by busy types looking for a quick and exciting gaming session.

Matterfall is a fluid, frenetic, explosively colourful arcade shooter sure to satisfy both casual players and high-score chasers. 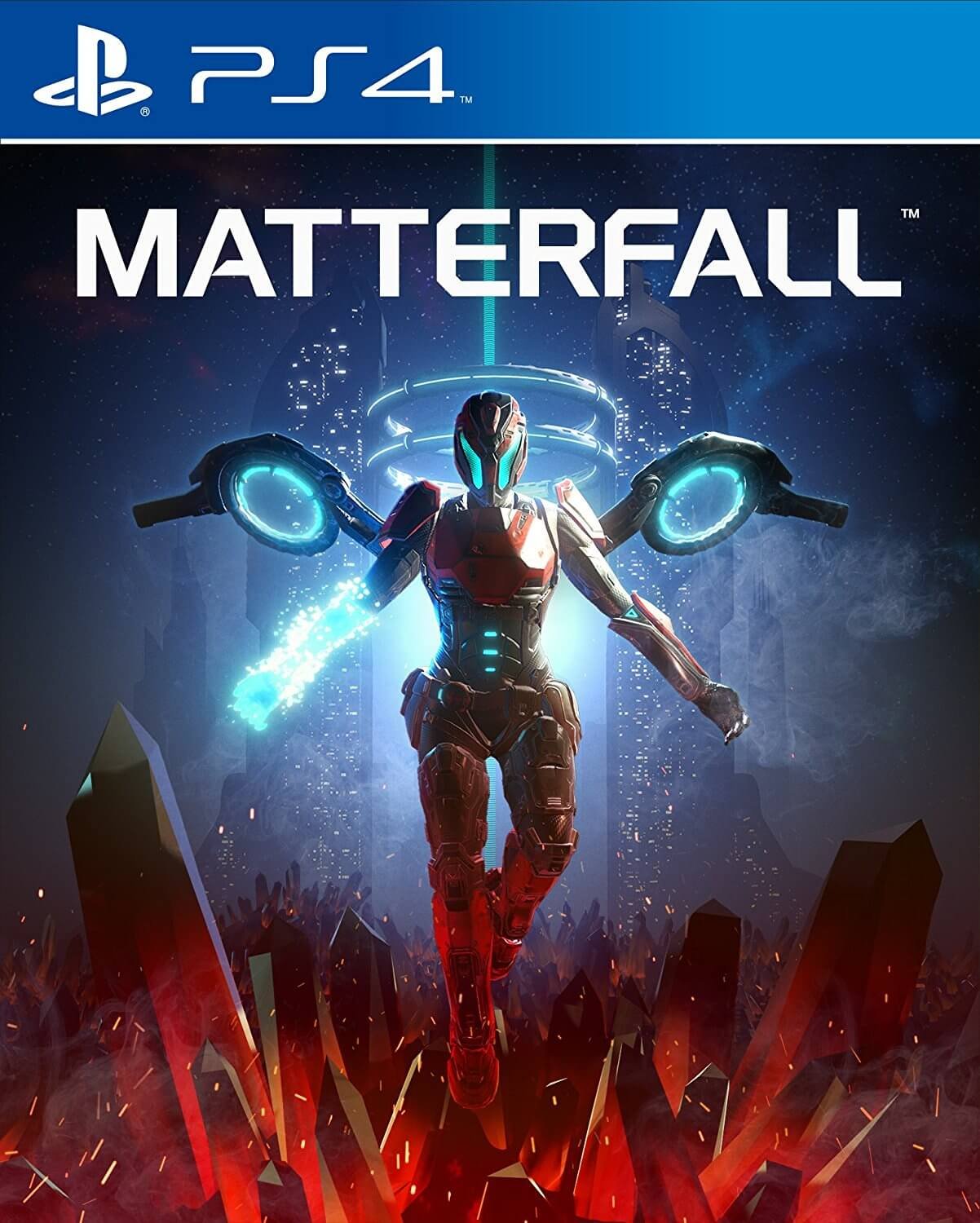