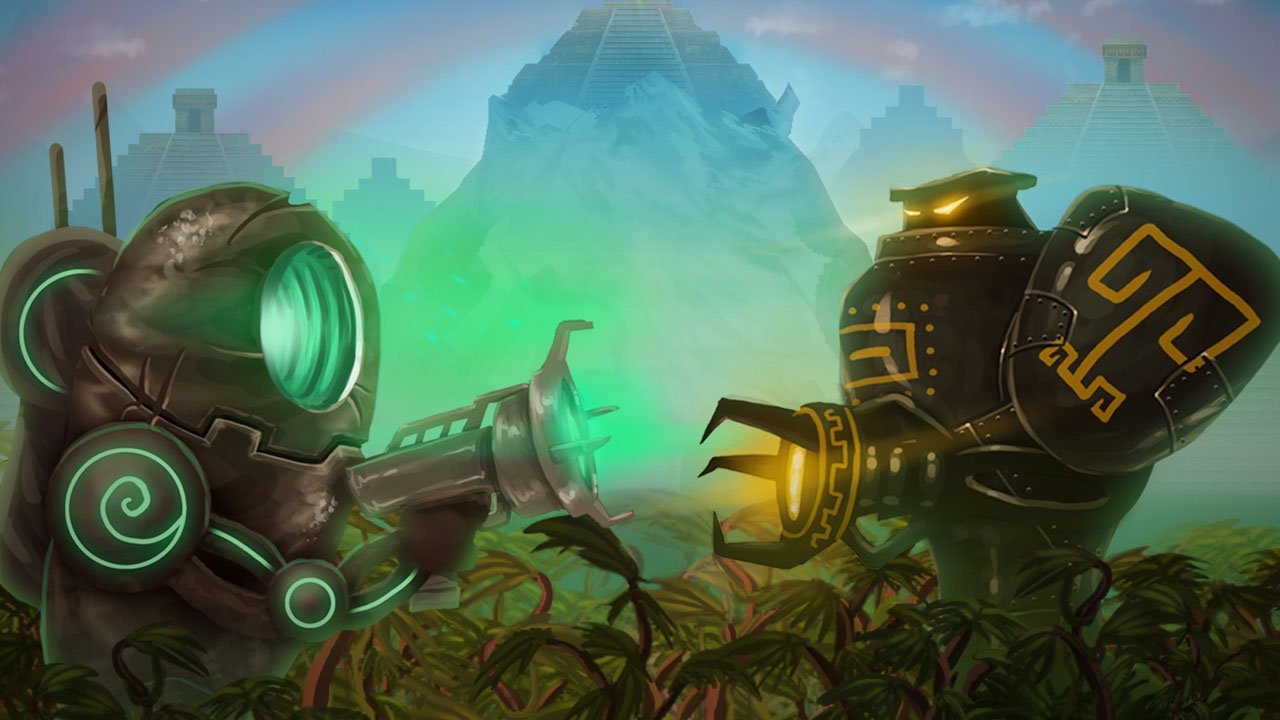 Mayan Death Robots is one of those games that perfectly illustrates why Steam Big Picture and Steam in-home streaming is a thing; it’s a brilliant couch co-op game. Honestly, it had me at its likeness to Worms, but it’s so much more than I had expected.

While its similarity to Worms is no coincidence, one of the first main differences that players will notice is that Mayan Death Robots has a wide selection of different robots to actually play as. Unlike similar games, however, where this is merely a cosmetic difference, each of the various robots on offer has various attacks that are unique to it. This makes for a bit of a guessing game early on until the player learns the intricacies of each of the various robots, but it means that once mastered, there is quite a high-level layer of meta strategy in the game. The usual physics-based artillery-style combat is changed drastically from robot to robot with the inclusion of projectiles that burrow in set directions, spawn crawling bombs, and summon tactical missiles a full round later. While jarring at first, it’s a very refreshing take on the genre, shifting the focus away from precision targeting and more towards mastery of the interactions between the different robots and their abilities.

Also new for this type of game is the inclusion of some semblance of story and progression. Rather than simply a series of random battles, combatants will progress through a (slightly) branching series of events hosted by a galactic entertainment network that specializes in robotic combat. It’s nothing elaborate, but it’s refreshing for sure, and it’s an interesting method of introducing and unlocking a steady stream of new robots, battlegrounds, and mechanics such as invading enemies, varying wind and weather conditions, and even boss battles that require both combatants to work together to defeat before going back to bombing the crap out of each other. Very clever.

So we’ve covered the robots and the death and all that, but what about the Mayans? Well, as it turns out, the giant killer space robots are each worshipped by different Mayan tribes—a clever nod to the South American/Egyptian pyramid/alien trope. But rather than being a passing theme for the sake of a catchy name, these miniature civilizations inhabit each player’s “base” area, and serve to both attack enemies who may stray too far to the opposite side of the map, as well as to increase the blast radius of weapons when destroyed by an enemy. It’s yet another clever little addition that’s been layered on to help Mayan Death Robots to feel like a totally unique experience. And they’re not just idle, either; they will build and expand their little settlements, move around, hunt enemies, and even fight off invading Spanish armadas. Oh yeah; that’s a thing, too. What tongue-in-cheek game featuring Mayans wouldn’t also feature adorably caricaturized invading conquistadors?

This all comes together beautifully with the game’s real party piece: the objective isn’t to destroy your enemy, but instead their “core”. Destroying an enemy player will have them sit out a round before respawning in a place of their choosing (which can sometimes be advantageous), but the only way to win is to destroy the core or cause it to fall off the bottom of the map by destroying all the terrain below it. This adds an entirely new strategic element to the game when paired with the terrain creation system—a special ability that saves up Tetris-style chunks of terrain at a rate of one per turn that can be consumed in place of any attack to shield, reinforce, or otherwise shift the focus of a match. With players launching barrages at each other and reinforcing terrain, the Mayans building little travel networks of ladders, and the invading Spanish kicking butt and blowing everything up, things frequently become as much about bombing the Spanish in your own base and attempting to rebuild as they are about destroying your enemy and their core.

Truly, Mayan Death Robots is the kind of game I’d love to sit back on the couch and play with some friends. It would certainly make it easier to vent frustration after spending 20+ minutes in a tense battle only to lose to an incredible string of physics interactions that leaves me applauding the computer player. But the real marvel of Mayan Death Robots is that it’s the first game of its type that I don’t feel is an incomplete experience if you don’t have friends to play it with. For a genre that’s been around for over 20 years now, that’s a pretty remarkable new trick to pull. And better still, it’s due to arrive on both PS4 and Xbox One marketplaces early next year.

Truly, Mayan Death Robots is the kind of game I’d love to sit back on the couch and play with some friends.