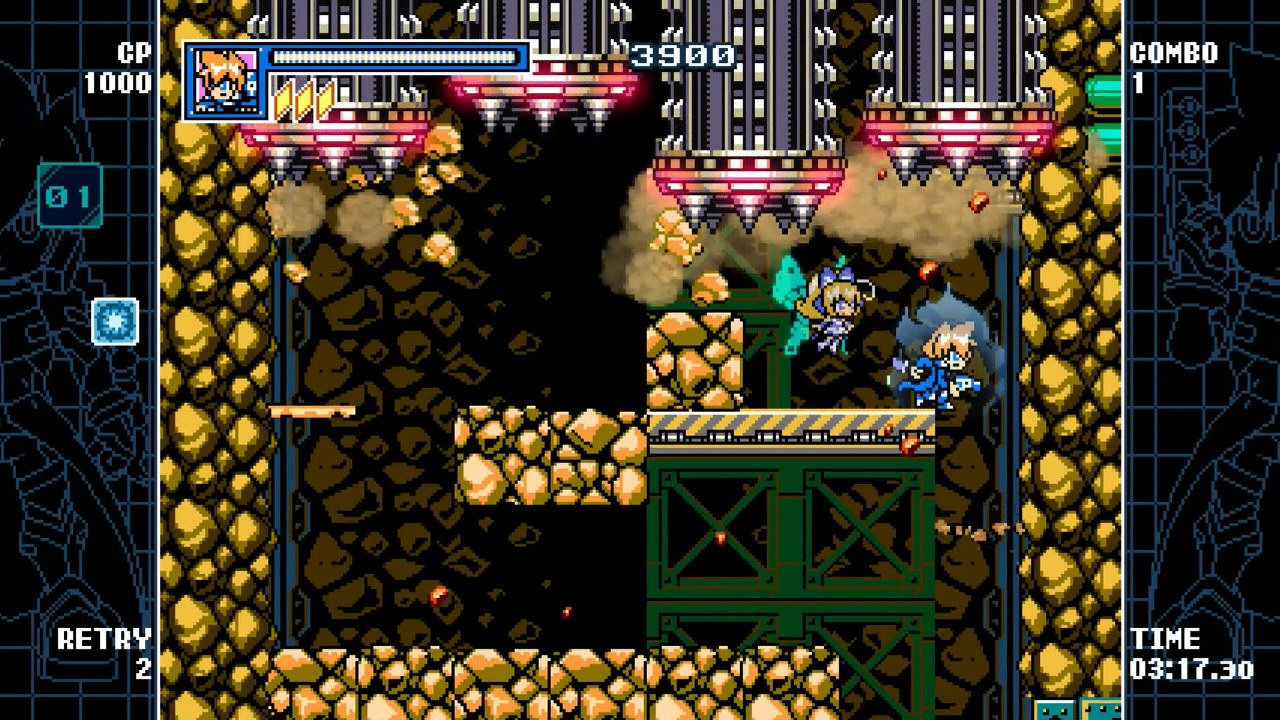 The title can also be considered a full fledged sequel to the Nintendo 3DS eShop title, Mighty Gunvolt. Mighty Gunvolt was a small spin-off title that originally released as a free download for those who purchased Azure Striker Gunvolt, a Megaman X inspired side scroller.

Presentation—especially in a retro-inspired title—can be a huge deciding factor, but thankfully Mighty Gunvolt Burst captures the DNA of Capcom's classic action platformers and delivers a game that both looks and sounds like it could easily have been on the NES back in the heydey of shoot 'em ups. Each stage has a unique Chiptune track that feels rightfully old school. Unfortunately, all the main stage bosses in the game share the same track for each fight, which got tiring after dying numerous times during the game's challenging encounters.

The game gives the player the option to play as Beck, the star of Mighty No.9, in addition to Azure Striker Gunvolt, star of Inti Create's other popular series of Megaman inspired side scrollers of the same name.  From the get-go, both characters play similarly but eventually get additional powers that distinguish them from each other. Unlike their games of origin, Both Beck and Gunvolt are limited in their abilities, stripped to only the essentials, with jumping and projectile attacks at the forefront.

As the player progresses through the game, Beck receives the ability to dash, which in this game acts as a means of traversal, sans the absorption bonus present in Mighty No.9.  Gunvolt also has access to some of his Adept abilities, however they are limited in effect and tied to a cooldown system—meaning players can’t solely rely on these abilities throughout the levels. The limited arsenal of moves is not necessarily a bad thing however, both characters in truth feel unburdened and more true to what made the classic Megaman titles so great—Mighty Gunvolt Burst is a textbook example of less is more.

Although the abilities that both characters have may be limited, the projectile attacks themselves can be customized to an almost ridiculous degree. Mighty Gunvolt Burst has an in-depth weapon customization menu that can be accessed any time during a level or prior to beginning a stage, which lets players change everything from bullet type to trajectory. The sheer amount of customization available to the player is staggering.

Customization and upgrades are tied to CP—or Cost Points—which can be earned by completing levels and finding hidden secrets. Modifiers can also be unlocked as the player progresses that add bonuses to attacks such as an element boost that can exploit boss weaknesses.

Each stage feels uniquely themed and consists of a boss character based on the bosses present in the original Mighty No.9. The stages ramp up in difficulty as the player progresses through the game, although players can pick levels in any order, the default scheme does seem to offer up an escalating level of difficulty.

The bosses in the game can be quite formidable and will offer up a good challenge. The game balances the tough boss encounters by providing players with the aforementioned customization features. For example, in its second phase one of the bosses jumps towards the centre of the arena and starts hailing down bullets, and normal projectile fire cannot reach the target. The player will benefit most from just avoiding the attack, however, a modifier that allows the projectiles to ricochet at an angle allows the player to attack the otherwise unreachable foe.

The stages never felt overly difficult, and thanks to the game's tight and responsive controls, even the later stages can eventually be overcome with a little bit of platforming know-how. Those who have a Pro controller will benefit from using the d-pad as it feels the best when playing, however, the split directional buttons on the left Joycon are more than capable of delivering when in portable mode.

The nuanced design when it comes to attacking really elevates Mighty Gunvolt Burst from a competent Megaman clone to a game that can stand on its own. The Burst in the title reflects the Burst feature present in the game. When either Beck or Gunvolt destroys an enemy point-blank, a bonus Burst score will be applied to the stage score. Unfortunately, the Burst mechanic adds very little to the game, in fact in some ways it feels counterproductive to shoot enemies up close in a game that is all about running and gunning.

Like Inti Create's other games, Mighty Gunvolt Burst features levels peppered with collectibles and secrets. Collectibles come in the form of stickers that fill up a book, rare items such as weapon modifiers can also be found in the stages. Finally, food items and hearts also fill out the stages and can often be the single most important thing to look out for when playing. Food can be held on to, providing replenishing nourishment when required, while hearts instantly replenish the HP gauge when picked up.

A good strategy—especially early on when your character lacks an assortment of weapon buffs—is to hoard all the food acquired while traversing a level. The penalty for death is insignificant and the levels all offer good checkpoints, meaning that stocking up on food and only using it during the tough boss battles will ensure a higher probability of victory.

Mighty Gunvolt Burst is a great throwback and homage to the classic run and gun platformers that the original Nintendo Entertainment System was known for. Inti Create has delivered a game that should be picked up by anyone who is in the market for a game that scratches that classic Megaman itch or for those who may have been burned by the not so good Mighty No.9 and want redemption.

Final Thoughts
Mighty Gunvolt Burst gives the player the option to play as both Beck, the star of Mighty No.9, in addition to Azure Striker Gunvolt.
More From CGMagazine 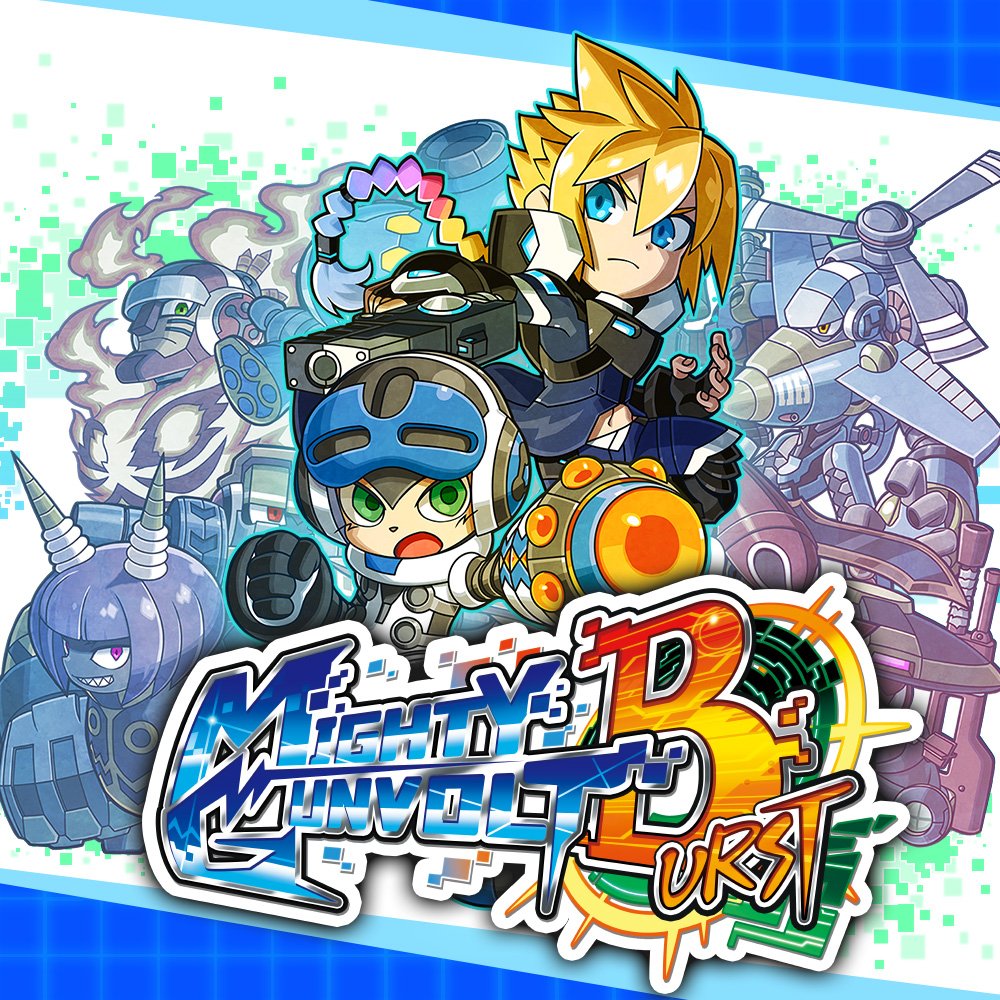