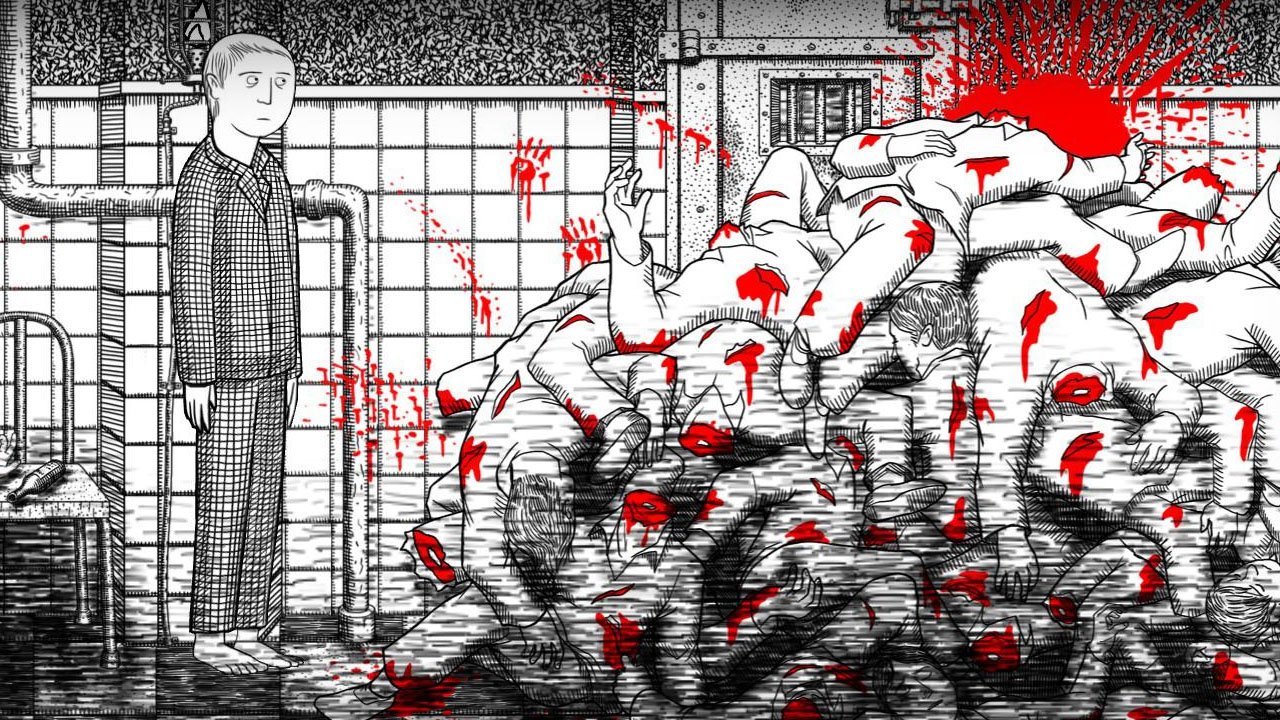 Neverending Nightmares is an intimate story. According to its Kickstarter page, the game is based on developer Matt Gilgenbach’s real-life battle with mental illness. You play as Thomas, a man haunted by a ceaseless stream of increasingly terrible nightmares who only wants to wake up and escape the hell inside his head, which makes for an intriguing foray into the subconscious of someone suffering from psychological torment.

Unfortunately, this personal element is the only thing that made me even the least bit uncomfortable while going through the two-hour horror adventure. Had I not known the story behind the game, I doubt it would have even given me a single goosebump.  Maybe that’s because of its unique 2D pen-and-paper art style and simplistic character design. Though charming and easy to understand (interactive objects and blood are in color, and everything else is black and white), I’m not convinced the cartoony aesthetic works for a game designed to scare (though shadows, which are nothing more than a bunch of short, overlapping horizontal lines, are delightfully creepy). Some of the enemies looked more silly than scary, which ended up making me smirk instead of gasp in panic.
[pullquote align=”right” class=”blue”]One thing Infinitap Games got right is Neverending Nightmare’s unsettling sound design.[/pullquote]
One thing Infinitap Games got right is Neverending Nightmare’s unsettling sound design. Before starting the story, a message recommends you play with headphones due to a “special audio processing mode” that doesn’t work with typical computer speakers. I didn’t notice any huge drop in quality when using just my speakers, but wearing headphones let the bassy, well-designed music and sound effects shine.

Controls are simple enough: Thomas moves with the arrow keys or WASD, he interacts with space or enter, and he “sprints”—though it’d be more accurate to call it a light jog—with shift. Running allows Thomas to escape the disfigured sumo babies and axe-wielding maniacs that chase him—that is, until Thomas gets winded only seconds into his run and has to stop to catch his breath. Thankfully, checkpoints are generous and disguised well, and deaths fit perfectly inside the fiction, considering the entire game is just one long dream sequence.

That dream sequence is a linear one comprised of constant door opening. In fact, I doubt I’ve opened more doors in any game than I did in my two hours with Neverending Nightmares. The game should have been called “Neverending Doors.” My basic strategy was to interact with each door I came across, in order. If the subsequent path led to a dead end, I’d backtrack and move on to the next door. Never once did I get lost, and the only time I died was when I was figuring out how to get past a certain blind enemy. Other than that, Neverending Nightmares lacks any real challenge, making it feel like less of a game and more of an interactive visual story.

Near the final level, the paths branch out in an ambiguous fashion, which added some variety to an otherwise straightforward affair. It wasn’t until after the credits rolled that I realized there were two more endings to discover. That’s a good thing, because two of the game’s conclusions are completely unsatisfying and don’t explain a single thing about the story. Even the “true” ending still leaves questions, and considering the game’s short length, I was left wanting more. With no level variety until the final stretch, there isn’t much replay value to speak of, which is a shame for such a short experience.

In fact, I doubt I’ve opened more doors in any game than I did in my two hours with Neverending Nightmares.